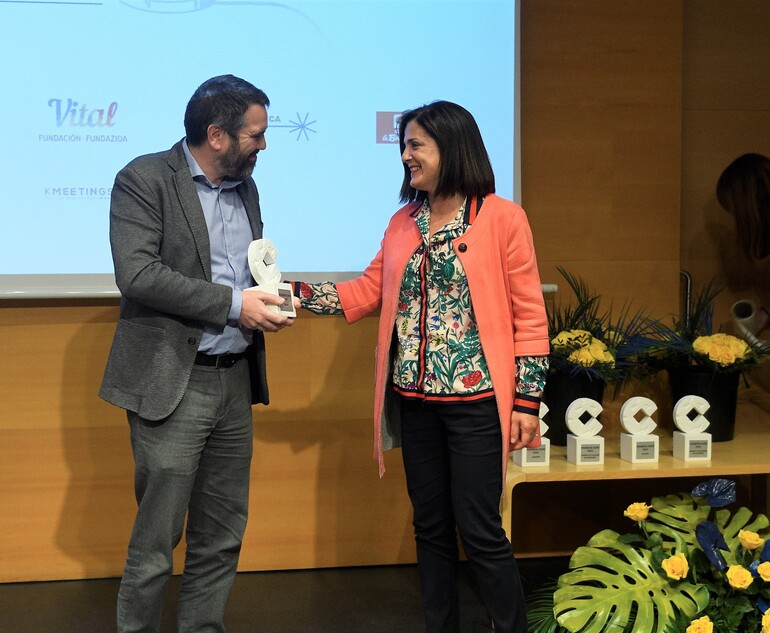 The Minister of Equality, Justice and Social Policies of the Basque Government, Mrs Beatriz Artolazabal, presented this afternoon the Cope Vitoria Award to the director of the Talgo factory in Rivabellosa, Mr Iván Fernández, for his promotion of the green hydrogen train.

The Cope Álava Awards have been held at the Artium Museum in the Alava capital, with the presence of the Mayor of Vitoria-Gasteiz, Gorka Urtaran, the Deputy General Ramiro González, the President of the Territorial Assemblies Pedro Elosegi, the Bishop of the Diocese of Vitoria -Gasteiz, Juan Carlos Elizalde. in addition to the director of Cope Euskadi, Javier Tutor, the commercial director of the radio station Begoña Sopelana,  Elisa López-Izquierdo, Alicia Calleja, Marta Salazar and Roberto Arrillaga

Cope Vitoria has recognized "the talent and innovative contributions of the Araba-Álava Territory" with several awards divided into six categories. The first of them dedicated to Asafes, an Alava association of relatives and people with mental illness, "for its 46-year history full of initiatives to improve the lives of affected people and break the wall that isolates them from society."

The Company award was dedicated to Talgo, linked to the Basque Country for more than four decades and whose main plant is located in the Alava town of Rivabellosa, from where trains leave for the US, Germany or Egypt. Its last two innovations are focused on the mixed green electricity and hydrogen train, and “Avril”, the large-capacity high-speed train capable of transporting more than a thousand people in one unit.

The Sports category was dedicated to the Deportivo Alavés Women's Football Club. Mrs Dafne Treviño has collected the award. Las Gloriosas have achieved their permanence in the first division where they arrived five years ago. “It has been a resoundingly successful first season in the top category after many hours of work and teamwork” highlighted Treviño.

The Vitoria-Gasteiz Mountain Club has been recognized for half a century of activity as a private sports association whose objective is to promote physical activity. The more than 3,000 associated people participate in the sports modalities of hiking, Nordic walking, skiing and mountain biking in Álava.

The Solidarity Prize has been dedicated to Udapa, a agrocooperative from Alava that treats and markets potatoes from Álava and allocates 10% of its budget to the social work of the Church in Vitoria-Gasteiz, in the pantry of the church of San Vicente, as well as donate potatoes to the shelters in Casco Viejo managed by Berakah.

The Cope Vitoria cultural award went to the Arabako Dantzarien Biltzarra group for the dissemination, promotion, development, teaching and research of our culture in terms of dance in the Historical Territory of Álava.