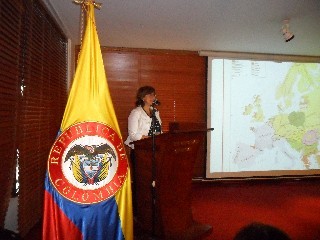 The Basque Government's Minister for Culture and the Vice-Minister for Linguistic Policy, Lurdes Auzmendi, participate in the II Seminar on Language Teaching and Evaluation

The Basque Government's Minister for Culture, Blanca Urgell, accompanied by the Vice-Minister for Linguistic Policy, Lurdes Auzmendi, participate in the II Seminar on Language Teaching and Evaluation in the Central University of Bogotá.

The inaugural act of the seminar was attended by Guillermo Páramo Rocha, Vice-Chancellor of the Central University, Gabriel Muyui, director of the Presidential Program for the Comprehensive Development of the Indigenous Peoples of Colombia, Mauricio Perfetti del Corral, Vice-Minister for Education, María Claudia López, Vice-Minister for Culture, and Aurelio Iragorri Valencia, the Colombian Vice-Minister of the Interior.

During her address, entitled "Linguistic Recovery and Democracy", Minister Urgell recounted the history of the Basque language and the process of normalising this language in recent years, stating that, in all normalisation processes, the determining factor is the desire of speakers to maintain their personality and linguistic specificity.

"It would serve no purpose for a government to invest all its economic and legal resources into the promotion of a language if the speakers of the language show no interest in it", she commented. During her address, she also drew attention to the equally important need for political consensus in relation to the language, stating that those who believe that they can normalise a language without taking the social determinants into account, or without assuming the necessary economic costs, are naïve.

Blanca Urgell believes that the Basques have come to terms with the history of our language, which means that the language is the way it is and not how we would have liked it to have been and one of the reasons why the Basque language has survived over the centuries whilst all the pre-Roman languages of Western Europe have disappeared may be precisely its ability to change direction and adopt expressions from other languages. "A language, particularly a minority language, can only survive insofar as it adapts to a changing world, which means that it must be open to the influence of other languages, amongst other considerations".

The Minister emphasised the importance of social and political consensus to achieve linguistic normalisation, which, in the case of the Basque language has been achieved via positive measures, always avoiding discrimination against those who do not speak Basque. That is, "affording all facilities to those who wish to express themselves in Basque and to those who wish to learn the language, but without imposing it on those who have no interest, because the normalisation of a language can only be achieved via democratic premises and with respect for the rights of minorities", she stressed.

In the view of Blanca Urgell, we have shown that Basque is a modern and flexible language, which functions perfectly in today's world, and the efforts of an entire people have enabled us to make advances in the normalisation of a language that, only three decades ago, was abandoned and the object of ridicule and apathy in almost every quarter. "I like to say that Basque is not the oldest language in Europe, an inappropriate description that a number of people are determined to assign, but rather one of the youngest, given the vitality it has demonstrated and the fact that many speakers are children, in higher proportions than in other languages in the surrounding area", she concluded.

The trip to Bogotá drew to a close with a series of other activities, such as the official reception in the office of the Basque Delegation for Colombia, Venezuela and Central America, or the meeting with Mariana Garcés Córdoba, the Colombian Minister for Culture, to renew the signing of the Protocol of Understanding relating to native languages, an act that was also attended by Moisés Medrano, director of Peoples [Poblaciones], Nancy Maldonado, coordinator of International Affairs, Diego Mantilla, an International Affairs advisor, and Josefa Hernández, a Peoples advisor.