The Basque Country shares its Open Government platform, "Irekia", with Mexico and the rest of the world 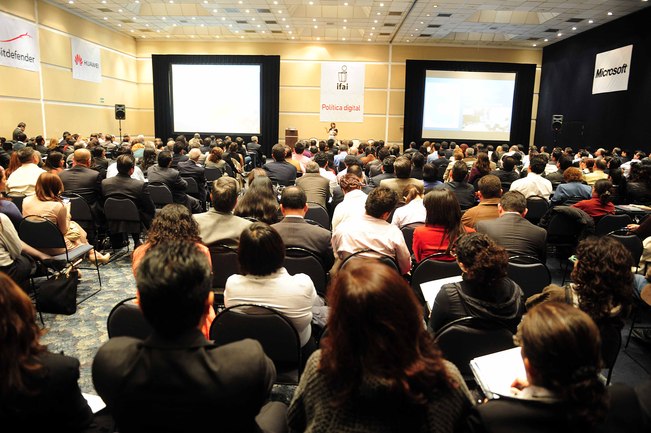 - "Open Government" is a practice that promotes economic development in the country in question and improves the quality of life of its citizens.

- Irekia has been the recipient of the Focus award for free knowledge and finished 3rd amongst the World's best websites in the ranking published in the Asociación de Comunicación Política's magazine El Molinillo.

Mexico City, 6th of October 2011.- During her participation in the international seminar "Towards the Construction of Open Government in Mexico", the Basque Government's director of Open Government and Internet Communication, Nagore de los Ríos, offered all levels of government and public offices in Mexico the system employed by the Basque Country to create a virtual platform that aids citizens to effectively employ public information to their own advantage: Irekia.

Nagore de los Ríos, who over the course of the last two years has positioned the Lehendakari of the Basque Country, Patxi López, as one of the political figures with the highest number of followers on social networks, warned the various Mexican civil servants that where they fail to provide citizens with tools and information, "others will undertake this task".

She asserted that "it is better to tell your story to the people" than let others discover it. "Everything that is swept under the carpet, comes to light sooner or later," she stated.

De los Ríos commented that over the course of the next few weeks, Argentina will launch its open government portal, based on the system developed by the Basque Country to ensure that Irekia functioned as a portal that enabled access, easily and in a comprehensible fashion, to government databases.
Hide full article

Irekia also enables all Basque civil servants to connect to social networks and information is also available in video format, for iPads, iPhones and mobile devices.

"We want other countries to employ it, in order to have them improve it," De los Ríos confessed.
During the seminar, which was also attended by the commissioner of the Federal Institute for Access to Public Information, María Marván, and the president of the National Institute of Statistics and Geography, Eduardo Sojo, De los Ríos provided an account of the Basque Country's experience with Irekia.

Irekia, the Open Government portal was created only a few years ago, but has already been the recipient of the Focus award for free knowledge and was ranked 3rd amongst the best websites in the world by the Asociación de Comunicación Política's magazine El Molinillo and is now a global reference point.

With a smile that constantly proved infectious, Nagore de los Ríos stated that efforts to draw citizens closer and make them more participative must emanate from government. She said that governments must show an interest in listening to citizens and resolve the main conflicts in their lives: in this manner development is achieved.

"It is easy to govern: nowadays, citizens speak to you directly via Internet," the Basque civil servant maintained. "Do you want to know how to make your government successful? Then read (what people say on social networks)", she added, addressing all civil servants.

De los Ríos affirmed that the lack of participation that a number of commentators criticised in relation to Mexicans was not different from any other citizens in the world who do not believe their governments capable of solving their problems.

"If citizens are demanding certain things of me, I will be the best in government if I pay attention to these demands and fulfil want they want," she stated. "It is no longer necessary to hire specialists to tell you what is failing in your government: there are greater possibilities now that people are communicating, the times of deciding things between four walls has passed. Elections as exams are no more", she affirmed.

According to the Basque civil servant, the resolution of conflict of any nature, even economic crisis or security issues, requires the cooperation of citizens, who will better understand the government's decisions where they analyse them. However, De los Ríos also cautioned that to achieve citizen participation, they must be "convinced that they are heard."

In all likelihood, Nagore de los Ríos stated, "the first thing that they have to say after so many years of feeling abandoned are complaints, or even insults," whereby she recommended that governments should suffer this phase, listen and allow expression, as transformation towards participative behaviour over time will eventually afford ideas for improvement.

In the view of De los Ríos, Mexico is "further ahead" than the Basque Country and Spain as a whole, as it boasts a Law on Access to Public Information, even though open government remains in the project stage.

Nevertheless, she explained that the lack of a law provided no excuse, as Open Government is a practice that only proves successful where it becomes customary. "It is about willingness, not about whether or not a law exists," she stated.

"In the beginning we had to educate those governing in the manner in which we teach children to brush their teeth," she added, affirming that those promoting such initiatives will have to combat resistance and take pains to ensure that citizens are heard via Internet services.

Andrés Hoffman, moderator of the event and director of "Política Digital" [Digital Politics], the organisers, thanked the Office representing the Basque Country in Mexico for the participation of Nagore de los Ríos.

The Mexican civil servants, from various offices and various states within the country, gathered together to analyse the tools to be employed and steps to be taken to ensure that the public information of governments, civil servants and any party under obligation, acts as a driving force for economic development.

Despite boasting a Law on Access to Public Information, Mexico has not yet generated participative citizens who, via the data obtained from the government, develop and demand the necessary changes to improve living conditions. This is the objective of Open Government.

María Marván appraised the situation stating that in recent years in Mexico "we uploaded useless databases." She revealed that the commitment to accounting harmonisation envisaged for 2012 would not be fulfilled, an objective acquired as a result of the passing of the General Law on Government Accounting, which seeks to ensure that the databases employed in government offices respect a series of standardised regulations in order to share information and make it more useful for citizens.

For his part, Eduardo Sojo assured those in attendance that, under his directorship, the National Institute of Statistics and Geography (INEGI) has improved the statistical information it generates.

Sojo spoke of the need to extend information and make it public. He explained that the Institute had set up a National Statistics Directory of Economic Units, whereby those interested can consult data on schools, hospitals, consultancies and all nature of businesses registered by the Institute, entirely free of charge.

The president of INEGI stated that his business is focused on the use to which information is put: "Use it to make money," he implored. According to Sojo, if citizens take advantage of data in order to question and evaluate they will be in a better position to decide how to invest their money, how to open a business or the place of residence that best suits their needs.