Minister Beatriz Artolazabal encourages Basque Youth "to bring society closer to other realities with their own projects, messages and codes" 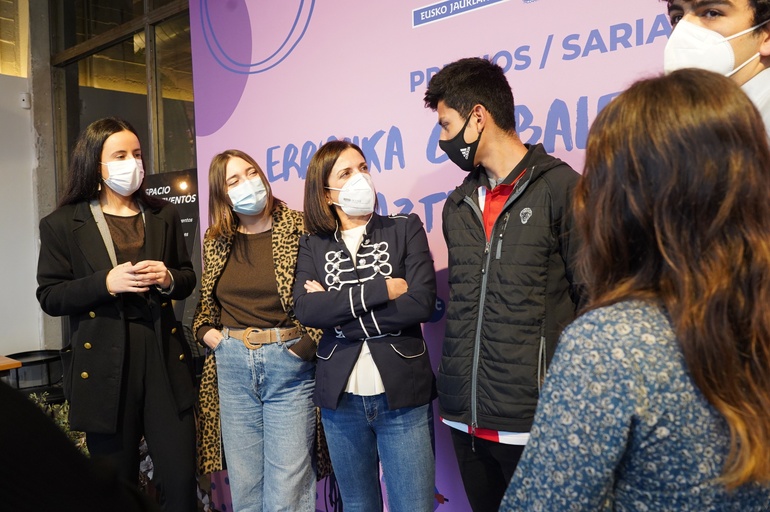 The Minister of Equality, Justice and Social Policies of the Basque Government, Mrs. Beatriz Artolazabal, has encouraged Basque youth "to bring society closer to other realities with their own projects, messages and codes". Artolazabal, together with Mrs Agurtzane Llano, director of Youth, and Paul Ortega, director of Development Cooperation, has participated, in the Olabeaga space "Silo" in Bilbao, in the "Erronka Globalen Aurrean, Gazteak Martxan" Awards ceremony, initiative to promote solidarity, development cooperation and exchange between Basque youth and those from other places, motivating new ideas to make youth aware of this matter.

“These are projects that propose to show other realities and worlds and promote awareness and the values of cooperation and solidarity between young people and also society as a whole. From young people for young people, with perspectives, codes and formats to approach young people. The call for "Gazteak Martxan" favours the active participation of young people in the way they want: to conceive, think, write and present with freedom and a critical spirit to transform reality. You have achieved it” applauded the Minister.

The prizes of 1,000 € to the projects that, having received more than 60 points, were not among the three with the highest score, went to: 1st. “MEPE Women on the march from Patagonia to Basque Country: itsasoak batzen gaitu”, by Ametz Gurrutxaga and Garazi Aranzabe. 2nd. “Emakume Artisten Sarea” project proposed by Leyre Arana, Garazi Barquin Ayerbe, Nerea Portillo and Patricia González. 3rd. “Getting to know each other to be supportive” by Ane Fernández de Larrea. 4. “Creation of a free time group in Lima” idea of Lara Fandiño Piña, Asier Herranz and Unai Revillas. 5th. "Tournament without Borders" proposed by Julen Torres, Jose Carlos Perez Mendoza and Jeiscar Andreina.

Sixty young people protected with a sanitary mask participated in the act. A photo call has served them to take souvenir photographs. The Disc Jockey and rapper Dacost has played ambient music

The awards have divided into three categories classified by themes: in the 1st category, dedicated to artistic activities, the Minister Artolazabal and a member of the jury have awarded the prize to EMAKUME ARTISTEN SAREA. In the 2nd. category, training actions for action and training-exchange days, the director of the Basque Agency for Development Cooperation, Paul Ortega, handed out, together with the Minister Artolazabal, the awards for the projects MEET US TO BE CARING, DECOLONIZE YOUR MIND, and SOUND STORIES OF YOUTH

In the 3rd category, of transformative actions and response to challenges and their connection between realities, the Director of Youth, Agurtzane Llano, together with the Counselor, have awarded the prizes to the projects “EMEP- Emakumeak Martxan Euskaditik Patagoniara: itsasoak biltzen gaito”; CREATION OF A FREE TIME GROUP IN LIMA, TORNEO SIN FRONTERAS and ESKUAK LUZATZEN

Artolazabal has indicated that the Cooperating Youth Awards are a way of “making a virtue out of difficulty. Know how to turn a problem into a fruitful opportunity. This act is a good demonstration that the pandemic has indeed brought us some positive aspect, although it may seem like a lie. Confinement and the impossibility of leaving our closest environment are at the origin of the “Erronka Globalen Aurrean, Gazteak Martxan” initiative.

“This new initiative ties in with almost three decades of operation of the Cooperating Basque Youth, when it was impossible to maintain its normality. This "Gazteak Martxan" and "Cooperating Basque Youth" coincide in focusing on social awareness, giving the entire protagonist to youth," Sailburu (Minister, in original basque language) Artolazabal added. “Bridges of connection between the Basque reality and those of other peoples have been generated and for this purpose the tools of solidarity”.

Artolazabal has highlighted that “In these days when cannons and tanks are thundering in Ukraine, our “Erronka Globalen Aurrean, Gazteak Martxan” is a commitment to words and cooperation. Faced with the irrational logic of weapons that we have also suffered in that country, we are committed to dedicating time to detect, think, speak or write, generating artistic activities. Time to promote training actions for action”.