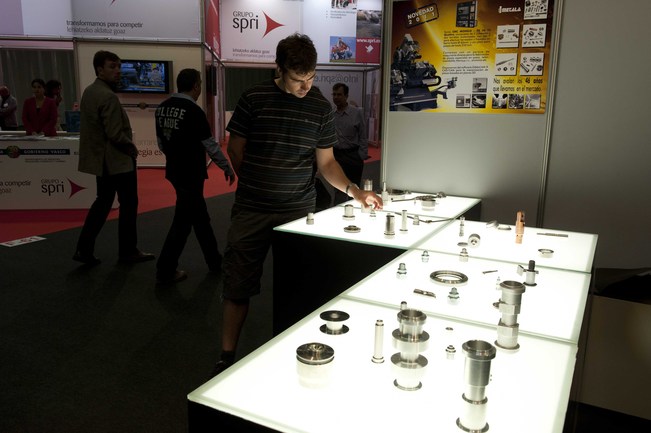 The Department of Industry unveiled the improved service at the CITA trade fair, which opened today at the BEC

The Cumbre Industrial y Tecnológica (Industry and Technology Trade Fair - CITA) 2011 will be taking place at the Bilbao Exhibition Centre (BEC) until Friday the 30th of September. The event has attracted a total of 888 different companies and the Basque Government's Department of Industry, Innovation, Trade and Tourism has its own stand, where staff from the department and from the Sociedad para la Transformación Competitiva (Competitive Transformation Agency - SPRI) will explain the improvements made to Customer Services - which include unifying telephone and e-mail access to its aid programmes.

The Basque Government's Department of Industry, Innovation, Trade and Tourism is taking part in the CITA trade fair, which was opened by Minister Bernabé Unda at the BEC, and is presenting the One-Stop Customer Services that will provide information and access to all the services and aid programmes managed by SPRI. Specifically, the telephone numbers for customer service have been consolidated into a single number (902 702 142), as have the e-mail addresses (info@spri.es), while a new IT application has been set up in order to manage the aid programmes and services provided by the company (accessible via the website www.spri.es). The service, which was set up in March, receives an average of 550 queries per week.

It is a powerful, newly improved interlocution service for professionals and companies, renowned for its flexibility and ease of access to information on any of its programmes and services via a single telephone number.

A total of 888 companies, representing the most important sectors in manufacturing and related processes, will be showing off their latest innovations at CITA 2011 at the Bilbao Exhibition Centre until Friday the 30th of September.

The Department of Industry, Innovation, Trade and Tourism will have its own 150-metre stand, on which staff from the department and from SPRI will provide information on the new Customer Services and will answer visitors' questions and listen to their opinions on subjects such as innovation, entrepreneurship and technology. For four days, halls 1 and 3 of the BEC will display the products and services of companies from France, Portugal, Italy, Germany, Morocco, Tunisia, United Kingdom, Czech Republic, China and of course Spain, among others. The event is Spain's largest industrial trade fair of the year.

(More information on CITA is provided in the attached document)

With its new Customer Services, SPRI has been able to:

3. Eliminate the separate access points to the programmes managed by SPRI: these can now be accessed via the website www.spri.es and a new application has been developed to handle the process. The application is a powerful tool that makes it possible to carry out advanced management tasks and locate the aid programmes that, depending on the profile of the user making the query, may be of benefit.

The application can be accessed at www.spri.es in the "Ayudas y Servicios" section and allows users to subscribe to alerts that will keep them updated with regard to aid programmes. The object of this initiative, which was set up by the Basque Government's Department of Industry, Innovation, Trade and Tourism, is to add value to the responses for each query that is received so that, if the query relates to a specific service or programme, it can be complemented with additional information on other initiatives that may of benefit to the user. Moreover, if the information requested does not relate to an area managed by SPRI, the service will nonetheless attempt to provide the user with details of the agency or organisation that can answer their query.