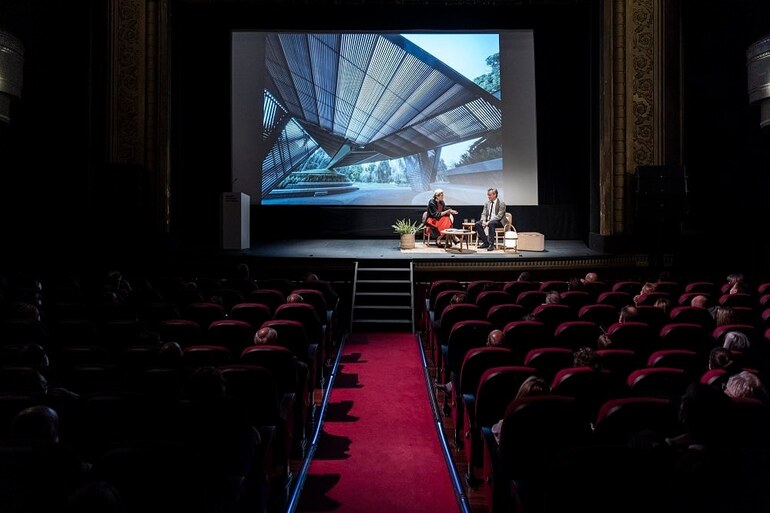 The third year of the Basque Country’s Mugak International Architecture Biennial drew to a close with a record number of attendees. This year’s event attracted about 70,000 attendees who enjoyed the exhibitions, conferences, workshops, talks and other activities that took place this year not only in San Sebastián, but also in Vitoria and Bilbao, compared to the 45,000 people who attended the previous year’s event. This has established this third year of the Mugak Biennale as a key architectural event throughout the Basque Country, which took place across the entire region for the first time.

The event was organised by the Basque Government’s Department of Regional Planning, Housing and Transport, which been promoting the Biennial since 2017. “Mugak seems to be going from strength to strength, which is a very good sign, not only in terms of attendance, which may not always be on the up, but also in terms of the high-quality content. According to Pablo García Astrain, director of Housing, Land and Architecture from the Basque Government, Mugak continues finding ways of introducing architecture to the general public combining quality and quantity year after year and proving that it is not something closed off and reserved solely for scholars or specialists”.

Mugak opened on 27 October at San Sebastián’s Teatro Principal with the theme “Heritage and Modernity”, alongside the featured artist of this year's central exhibition, Carme Pinós. Pinós was named as winner of the 2021 National Architecture Award, the most prestigious award in this field in Spain, just a few days after this Catalan architect closed the Biennial on 30 November last. His exhibition, “Carme Pinós’ Studio-Context and Concepts” will continue to be on display until 27 February at the Basque Institute of Architecture.

One key feature of this year’s event is the significant increase in attendees to exhibitions organised by the partner associations. In fact, “Arantzazu, 70 years”, organised by the Gipuzkoa branch of the Official Association of Architects Vasco Navarro and located in the D’Museoa in San Sebastián, was the most widely attended exhibition this year.

Another one of Mugak 2021’s success stories was Habic’s touring exhibition entitled “Design craftsmen”, which was on display in public spaces across the three capitals of the Basque Country. The tribute to the pioneers of design furniture in the Basque Country- consisting of eight iconic pieces from eight Basque companies - had particularly record-breaking attendance during its tour through Bilbao. The Basque production was therefore a major star this year, with local themes being most popular among the public.

“The Biennial once again came about as a result of the partnership between a range of diverse actors, thanks to whom we have had great results this year,” said this year’s curator, José Ángel Medina. “We are very satisfied with its reach, confirming how consolidated it is in the architectural arena.”

This third year of Mugak also offered an extensive and comprehensive programme of complementary events that, unlike previous years, was focused on about fifty conferences, a dozen workshops and other activities such as guided tours, talks and day-long workshops combining architecture with other areas such as cinema or education over a one-month period.

Almost all the exhibitions involved a certain activity, such as children's and family workshops related to the work of Carme Pinós, a series of talks to introduce the sanctuary of Arantzazu from an architectural viewpoint, a visit to the Old Section of San Sebastián guided by the typography set contained in the book “The A to Z of San Sebastián”, and much more. Three congresses were also held during this third Biennial: The European meeting in San Sebastián, the seminar “An examination of productive housing” in Bilbao and Sestao, and the annual meeting on Basque Country Planning in Vitoria.

Several renowned professionals visited Mugak this year. Apart from our key artist Carme Pinós, other noteworthy speakers such as Rudy Ricciotti from France and Christian Kerez from Switzerland also took part, helping Mugak stretch beyond our borders once again this year. Other recognised Spanish architects who have designed major works, such as Oscar Tusquets and Fermín Vázquez, also took part.

The programme was once again possible thanks to the proposals contributed by the participating associations and entities, including the Pena Ganchegui Archive, the Official Association of Basque Navarro Architects, Arkupe, the San Sebastián Association of Contemporary Art Galleries, Atari, Baskegur, Elias Querejeta Zine Eskola, Eraikune, the UPV/EHU Higher Technical School of Architecture, Espacio Reflex, Europan, the UPV/EHU, Faculty of Fine Arts, San Sebastián Festival, Habic, the Bilbao branch of Institut Français, Maushaus, the Cemento Rezola Museum, San Telmo Museoa and Sestao Berri. “This Biennial was a participative effort, conceived as such right from the very start," Garcia Astrain noted at the Mugak closing event on 30 November.