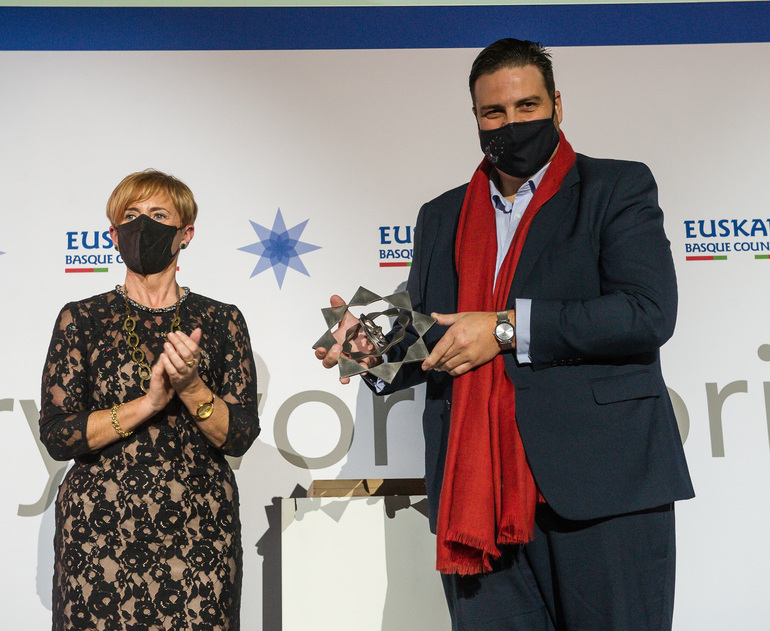 This afternoon at 19:00 Tabakalera's Prism in Donostia-San Sebastián will be the venue for the Basque Culinary World Prize 2021 award ceremony for Xanty Elías who, through Gastronomy, is promoting food education for children.

The Basque Culinary World Prize is a unique and global award given by the Basque Government, within the framework of the comprehensive Euskadi-Basque Country strategy, and by Basque Culinary Center, a leading academic institution in the field of Gastronomy. An Award that recognises the work of chefs with transformative initiatives in the fields of innovation, technology, education, the environment, health, the food industry and social and economic development, among others.

In the presence of authorities and prominent personalities from the Basque food sector, the Basque Government's minister for Economic Development and Infrastructures, Arantxa Tapia, will hand over the award to Xanty Elías, valued at 100,000 euros.

Through his “Children Eat the Future” project, since 2018 he has worked for the inclusion of a cross-cutting “Solidary Gastronomy Culture” subject in Spanish primary schools in order to promote education on healthy eating, convinced of the importance of educating in the culture that surrounds cuisine and sensible consumption. The innovative programme, which has already received national and international awards, thus promotes a new generation of sensible consumers, which not only benefits young people but over time can have an impact on society as a whole.

Under the motto, “There is nothing healthier than educating”, Xanty’s programme, a pioneering project for educating in food culture, has been active in more than 80 schools in Andalusia and Madrid, with the participation of close to 10,500 primary school pupils, a figure that will double starting in January 2022.

In addition, as the chairman of the Prenauta Foundation, he is committed to tourism, innovation and entrepreneurship in the restaurant sector, but in particular to promoting food education among school-aged children, convinced of the power that this has to offer better health conditions, sensible consumption and the culture around cuisine.

The 100,000-euro endowment of the Basque Culinary World Prize will be used to disseminate the Children Eat the Future initiative around the world and help to promote this subject in schools, and to create new content. In the words of the winner, Xanty Elías:

"Being the first chef with an award-winning Spanish project is truly a dream come true, giving us visibility and reinforcing our goal. And that goal is what we’re going to invest the prize in, to increase the number of children educated in supportive and sensible gastronomy; we couldn’t be happier. We hope society can understand that gastronomy is born in each one of us from a young age, generating a multiplying value in society”.

The Basque Culinary World Prize was launched in 2016 to provide testimony to the way that gastronomy could constitute a force for transformation by highlighting the work of entrepreneurial men and women who strive for excellence; the work of innovative and creative individuals – individuals who are tenacious but, above all, committed to society.

Since then, the award has received more than 900 candidacies from 42 countries, with close to 600 nominee chefs. In order to be considered for the prize, the chefs first had to be nominated by another professional currently working in the world of gastronomy.

Like in previous editions, also in 2021, during three months professionals and institutions from the industry nominated chefs from around the world who prove that gastronomy can be a driving force for change in different fields.

On 15 July, the Basque Culinary World Prize announced Xanty Elías as the winner of the Basque Culinary World Prize 2021, and also made two special mentions, reaffirming its interest in highlighting current challenges and identifying entrepreneurial chefs dedicated to excellence, as well as being innovative, creative and tenacious, committed to their community and who give an example of a phenomenon that is as inspiring as it is contagious - gastronomy.

For that reason, in addition to Xanty Elías, the jury recognised the work of two more chefs, giving a special mention to Kia Damon (USA), for fighting for contexts of equality, for diversifying the referential people who stand up for this sector and making visible the talent of groups that are normally excluded, and to Ana Estrela (BRAZIL/ITALY) for socially integrating people through cooking.

At each edition, the Basque Culinary World Prize, through the winner and the special mentions, takes the opportunity to send a message so that the international community can see in what areas a chef can contribute value, and at this edition it has done so by focusing on food education, in addition to the fields of social integration linked to immigration or the diversification of talent.