Minister Beatriz Artolazabal proposes in the Council of the EU: "Participation Spaces for Youth prioritize dialogue with the elderly, promote entrepreneurship and count on young women"

Embed video
Minister Beatriz Artolazabal proposes in the Council of the EU: "Participation Spaces for Youth prioritize dialogue with the elderly, promote entrepreneurship and count on young women" Source: Irekia 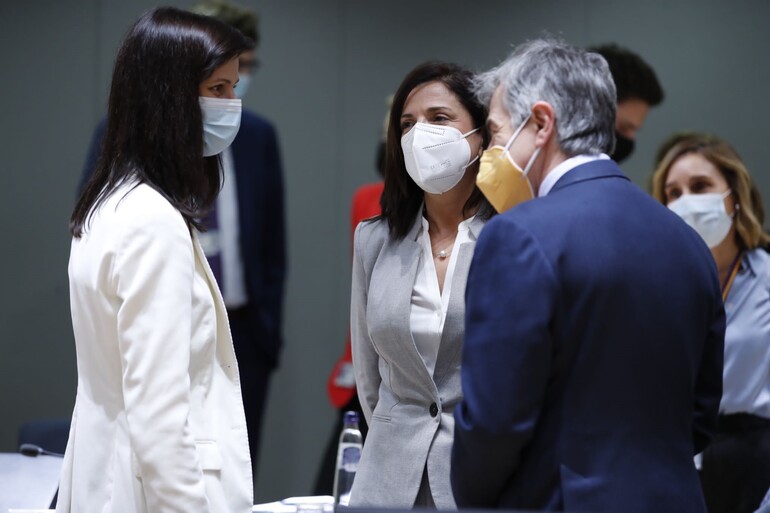 The Minister for Equality, Justice and Social Policies of the Basque Government, Mrs Beatriz Artolazabal, proposed to the Council of the European Union, on behalf of the Autonomous Communities and Cities, “that the spaces and frameworks for meeting, collaboration and participation for Youth have to be forums in which dialogue between the Youth and the Elderly is prioritized; entrepreneurship is promoted and Young Women and Young Migration are counted on, who, thanks to training and involvement, participate in the development of the Union”.

Mrs Artolazabal has intervened in Brussels in the Council of Ministers of Education, Youth and Sport of the European Union, within the regional representation, together with the Ambassador of Spain in the Permanent Representation to the EU. The Minister was accompanied by the Delegate of the Basque Government to the European Institutions, Marta Marín.

“Regions and Autonomous Governments we consider that special attention needs to be paid to the role of young women in civic spaces and in sector strategies. The definition of advanced youth participation systems is also necessary, thanks to an institutional and social dialogue with young people. The tools and online communications in youth participatory processes are elementary”.

“The impact of Covid has shown that it is necessary to focus on the mental health of young people. Today more than ever, online tools and communications in youth participatory processes are elementary”, Artolazabal pointed out in the EU Council of Youth Ministers.

According to the Minister Artolazabal "the initiatives that are proposed for the new youth spaces will have to be concrete and close to the needs of future generations."

Responding to the question of "How can the Civic Spaces for Youth be maintained and receive support from the authorities at various levels?", Beatriz Artolazabal considers that "it must be taken into account that the role of regions and cities constitutes an example of promotion and promotion of Youth. Also in the management carried out in the COVID context "

"The Civic Spaces for Youth that are developed from sub-state policies, constitute a reflection of the closest, local and regional environment and will represent an opportunity to develop in them the policies and strategies agreed in the European Union for their future" has stressed the Minister. “It is a timely gateway in the proposals and initiatives included in the NEXT Generation EU Regional Recovery Plans. We also consider that it is necessary to guarantee a priority role for Youth in the design and development of the European Union”.

According to Artolazabal “the speech of the President of the European Commission, Úrsula Von der Leyen, in the European Union Debate of September 15, 2021 has been an example of this since it has insisted on setting Youth as a priority, along with climate change and Next Generation EU funds. We agree: it is the Youth who must be present in the debates of the Conference on the Future of Europe”.

The Council for Education, Youth, Culture and Sport of the EU, takes place on 29 and 30 November 2021. Among other highlights on the agenda, debate on approaches to blended learning, education and digital skills, civic spaces for young people to facilitate their constructive participation, the availability and competitiveness of European audiovisual and media content and a European sports model.

The Council seeks to get ministers to pass a Resolution that ensures the recognition and follow-up by relevant stakeholders of the results of the Eighth Cycle of the EU Youth Dialogue. This Dialogue serves as a forum for permanent reflection and consultation on the priorities, implementation and monitoring of European cooperation in the youth field. Likewise, ministers expected to adopt Conclusions on the implementation of the EU Youth Strategy and a Resolution on the 2022-2024 work plan in the field of youth.