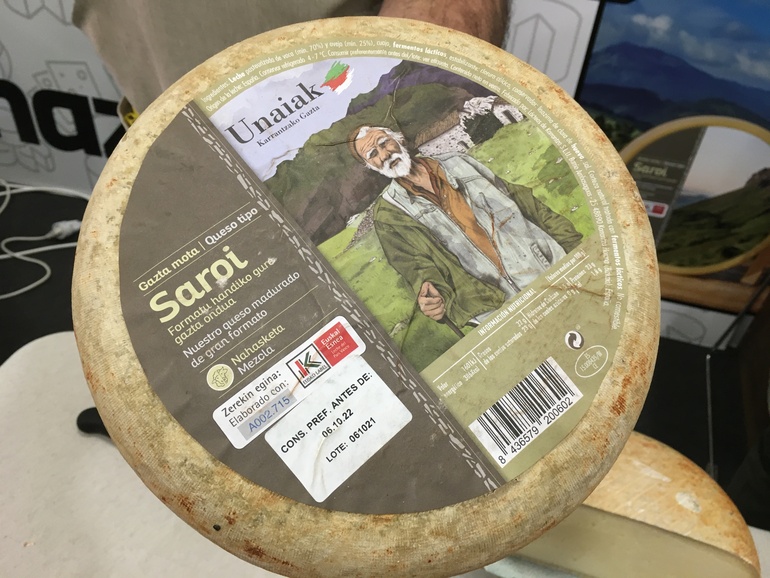 The winning Basque cheeses are Saroi Unaiak by the cheesemakers TGT from Karranza, made with Eusko Label milk, and Idiazabal cheese by the La Leze cheesemakers from Álava.

Oviedo is currently hosting the International Cheese Festival, the world’s biggest global fair with the focus on cheese as its main ingredient.

In the framework of said festival, yesterday saw the celebration of the 33rd edition of the prestigious World Cheese Awards competition, in which two cheeses from the Basque Country each carried off a “Super Gold” medal.

The cheeses in question are Saroi Unaiak by the cheesemakers TGT from Karranza, made with Eusko Label milk, and Idiazabal cheese made by the La Leze cheesemakers from Álava, who had already carried off other medals at the World Cheese Awards, the latest at the 2018 edition held in Bergen, Norway.

The winner of the award for the world’s best cheese at the World Cheese Awards is the goat’s cheese Olavidia, by Quesos y Besos from Guarromán (Jaén).

The world’s biggest cheese event received 4,078 entrants from around the world, 62 of which came from the Basque Country.

Now that the competition is over, the International Cheese Festival will continue to run until Saturday November 6th. The Basque Deputy Minister of Agriculture, Fisheries and Food Policy, Bittor Oroz, travelled to Oviedo to support the representatives of the Basque Food Chain participating in this cheese fair, from producers to professionals from the world of gastronomy who use cheese made in the Basque Country as ingredients for their dishes.

The different areas of the International Cheese Fair focus on biodiversity, sustainability, internationalisation and innovation with a view to promoting development of the cheese & dairy sector while fostering commercial relations between those who produce and buy in the sector.