Launch of the 'Basque Diaspora’ post-graduate course, a pioneering initiative on the agenda for our communities abroad 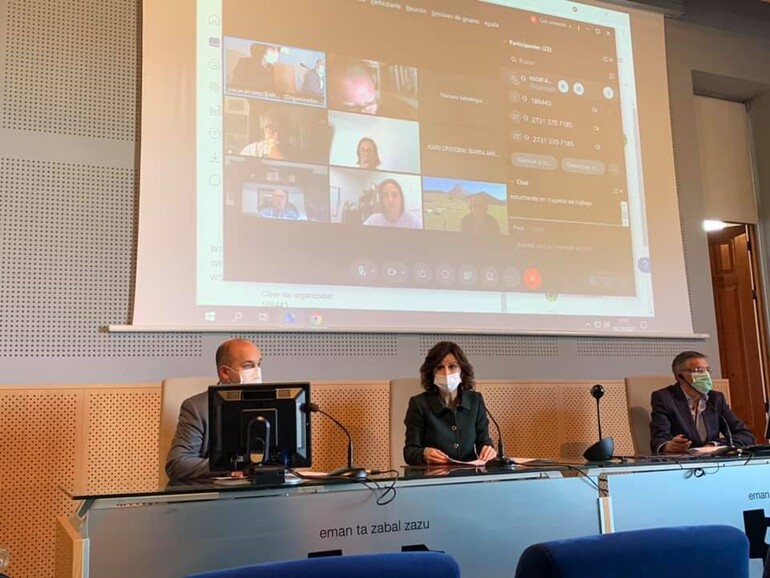 This postgraduate course is attended by 24 students, 12 from the Basque Country and 12 from the diaspora (Argentina, Uruguay, Chile, Peru and Venezuela). 9 students are attending the course in person and 15 online.

This is one of the first initiatives on an international scale that is interested in the study of particular diasporas, in this case the Basque diaspora. In Europe there are only two countries with equivalent studies on their national diasporas, but these are two "super diasporas" that have traditionally enjoyed great visibility and popularity: Italy and Ireland.

According of the Basque Government’s General Secretariat for Foreign Affairs, Marian Elorza, the Basque Diaspora post-graduate is a “pioneering initiative” that forms part of the agenda of the Office for the Basque Community Abroad

All of these initiatives are contributing to the knowledge and value of the Basque migrant reality. An important phenomenon, “which dates back beyond the 15th century and therefore represents more than 600 years of Basque presence abroad,” said Elorza.

The head of Basque Foreign Affairs continued to talk about how the Basque migrant tradition is not only prolonged over time, but also deeply rooted in society as a whole, since practically all the families from the Basque Country have a relative or acquaintance who has emigrated.

The uncle in America

Even back in 1910, in other words the early 20th century, a time when Europe was sending large number of migrants across the Atlantic, Bayonne author Pierre Lhande stated that “to be a good Basque, one must have an uncle in America.” Now, “111 years later,” joked the General Secretariat, “you can have an uncle anywhere in the world, not just in America, or from anywhere else on the planet.”

Therefore, she continued, “our challenge as a government and as a society is to transform this small country’s great diaspora into an opportunity.” And the aim of this professional post-graduate course in Basque Diaspora, continued Elorza, is based on “precisely covering the important need to delve deeper into this migratory reality and from an academic perspective, so common in our country.”

How networks abroad are “woven” and “disseminated”

The four-year Institutional Action Plan 2020-2023 “SAREGINTZAN” (“WEAVING NETWORKS”), which emanates from the VII World Congress of Basque Communities Abroad, has set out the following mandate in its goal no. 2: Diasporise, and therefore promote knowledge of the reality of the Basque Diaspora through the creation of postgraduate studies on migration. The General Secretariat for External Affairs continued by saying, “we are today dealing with meeting this demand.”

Marian Elorza then described how advances in technology and communications “allow us to have rapid access to people and places not only in America, but all over the world.”

This transformation that we are experiencing also touches the Basque community abroad, which is no exception. “Basque migration flows have been changing destinations and the ways people relate with each other have evolved exponentially thanks to new technologies. 27 years ago, we were talking about a Basque community while today we are talking about several communities that make up a global Basque community,” continued Elorza.

For all these reasons, the postgraduate degree has a clearly international vocation as only it could have, while also being cross-cutting and forward-thinking to address the study of the Basque diaspora from an interdisciplinary perspective. Any professional or person interested in delving deeper into Basque diaspora in a global context will find a series of convergent perspectives from very diverse scientific fields and perspectives, such as history, sociology, literature, anthropology, international relations, communication and many more.

Marian Elorza concluded her speech by thanking the Vice-Rector for Postgraduate and Continuing Education of the UPV/EHU, Montse Maritxalar, and the lecturers and students who are part of the project for their interest and collaboration, which has made this initiative a reality. The vice-rector then introduced the speaker who opened the postgraduate course, Irishman Kingsley Aikins, and gave him the floor to open the course.