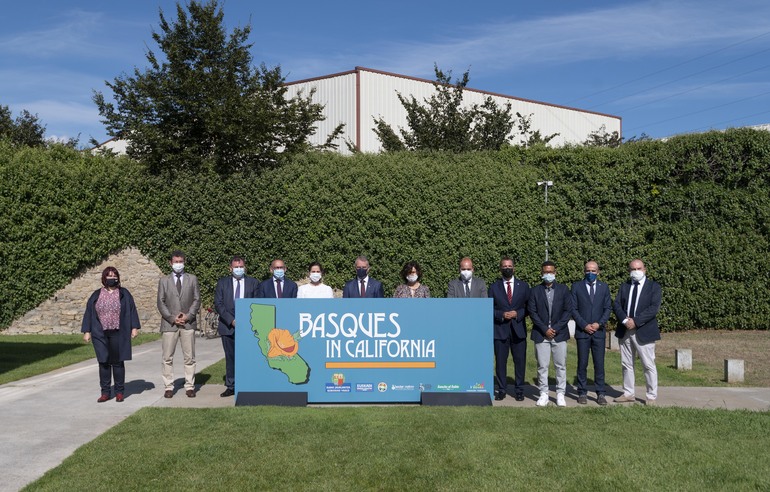 “The Basque Country is proud of its Basque Communities abroad and of its Euskal Etxeak [Basque clubs for people living abroad]: an active, open and dynamic community that is today once again appealing to the imagination, showing the world what it is to be and feel Basque”, said the President of the Basque Country at the institutional event organised in Vitoria-Gasteiz to mark Basque Diaspora Day, which is taking place today for the fourth consecutive year. The event, which was streamed live to all the Basque communities abroad, was attended by the President of the Basque Parliament Bakartxo Tejeria, the Deputy General of Araba/Álava, Ramiro González and Jon Urresti and Axier Urresti, President and Executive Director of the Vital Foundations, respectively.

Prior to the institutional event, the President of the Basque Country opened the exhibition Basques in California at the Sancho el Sabio de Gasteiz Foundation, containing explanatory panels and display cabinets with objects from the Basque Museum in Boise (Idaho). The exhibition was completed by funds from the Sancho El Sabio Foundation, the largest Basque culture documentary centre, which takes a deeper look at the Alava presence in California. This touring exhibition can be visited until 28 October.

Nearly fifty events and initiatives were held in Gasteiz organised through social media in 14 countries around the world to commemorate the Basque Diaspora Day, “a historic demand”, the purpose of which is to continue to unite Basque communities in different parts of the world, according to the President of the Basque Country, who added “we are Basque no matter what part of the world we are in, and we are spreading the values of our country, such as being close-knit, commitment, generosity and solidarity”.

At another point in his speech, Iñigo Urkullu mentioned the commitment of the Basque institutions to the diaspora, which translates into the recognition and appreciation of Basque migrant history; support for the different existing and future Basque communities, and in weaving a large network of Basques worldwide, which supported by new technologies, contributes value to the presence and impact of the Basque Country.

He went on to explain that this shared challenge is advancing and gave one example of the Basque Diaspora Archive, which has received donations in just over two years, which is available to people who want to delve deeper into the history of the Basque presence around the world; the University Specialisation Degree that is to be taught at the University of the Basque Country, a one-of-a-kind specialisation in Europe that has been very well received; and the HanHemen initiative, a gradual process of building a large network by pooling ideas, experiences, proposals, needs, etc. in a process involving social and digital innovation.

The President of the Basque Country concluded by stating his desire to transfer recognition to the Basque community “for the demonstrated ability to cope with adversity and help those who need it most”, particularly during these difficult times due to the global health crisis, and he expressed his conviction that “we will come out of this together and be strengthened from this pandemic.” “We will once again show the world the great network of people we have abroad,” he concluded.

A series of workshops have also been organised at Vital Fundazioa Kulturunea (La Paz 5, 1st floor Dendaraba) to mark this Day, taking place in September and October that will address the Basque diaspora in the United States (history, culture, etc.), and a film series at the UPV/EHU Faculty of Arts in Gasteiz.