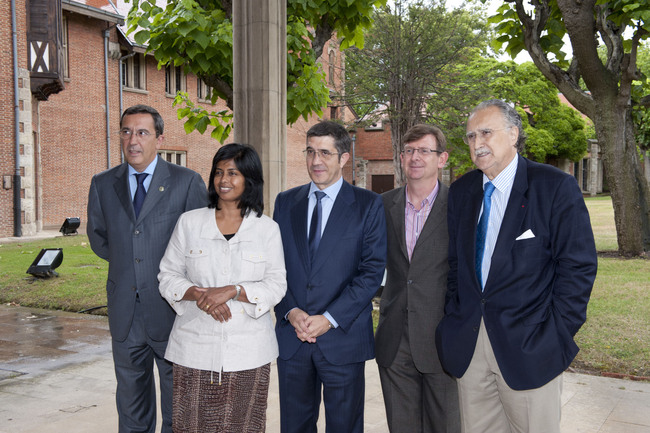 In the event that Bilbao is announced as the winner in October, the Basque capital will become an international benchmark for design

Manuel Salinero, the General Secretary for the Presidency of the Basque Government, spoke at the press conference held in Alhóndiga as part of the assessment of Bilbao's candidature for the 2014 World Design Capital. He highlighted the enormous effort made by the Basque Government and other institutions in preparing the city's candidature, an effort that has ensured Bilbao's worthiness as a potential victor. "Today has to be the day on which we convince the jury that Bilbao deserves this recognition", he said.

A delegation from the Organising Committee for the World Design Capital (WDC) initiative has spent the past few days in Bilbao to witness, first hand, the process of urban regeneration undertaken in the city and the importance of design in improving the competitiveness and quality of life in Bilbao, Biscay Province and the Basque Country as a whole.

The delegation is made up of Professor Martin Darbyshire, the co-founder and general manager of the design and innovation consultancy Tangerine, and Dilki de Silva, the secretary general of the International Council of Societies of Industrial Design, both of whom presented their conclusions this afternoon at the press conference alongside Manuel Salinero and representatives of Bilbao City Council and the Provincial Council of Biscay.

The representatives of the WDC Organising Committee arrived in Bilbao on Monday afternoon and have spent yesterday and this morning learning about the different focal points and activities that make up Bilbao's candidature for 2014 World Design Capital. They have been accompanied during their visit by representatives of the main institutional, business and financial agents involved in the initiative.

The official lunch that took place yesterday at Artaza Palace in Leioa was presided over by the Lehendakari, Patxi López, and attended by a range of public figures including the Mayor of Bilbao, Iñaki Azkuna, and the Deputy General of Biscay Province, José Luis Bilbao. The event reflected the consensus that has been reached between the different Basque administrations to support Bilbao's candidature, which is also supported by a number of major companies such as BBVA, Iberdrola, Euskaltel, Petronor, Gamesa, BBK and MCC.

Yesterday the Organising Committee delegation met with around 100 companies and individuals connected to design, innovation and the creative industries in Bilbao, Biscay Province and the Basque Country. The places they visited during these two days of intense official activity included the Guggenheim Museum, the Iberdrola Tower, the Euskalduna Conference Centre, the new university facilities in Abandoibarra (the University of the Basque Country's Paraninfo Hall and the library at the University of Deusto), the AlhóndigaBilbao cultural and leisure centre, the new, modern sports facilities in Miribilla (the Frontón Bizkaia pelota centre and Bilbao Arena) and the underwater winery and the "university of the sea" in Plentzia.