The Basque Country remembers the victims of terror in Catalonia 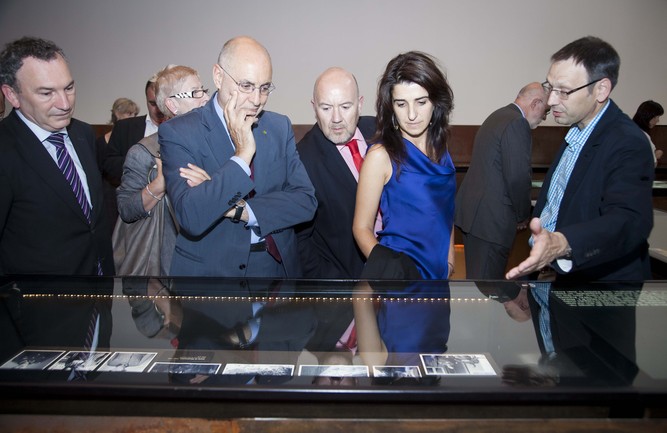 The Minister for the Interior, Rodolfo Ares, today reiterated the Basque Government's commitment, with the full collaboration of the national Government, to continue to work with the highest degree of efficiency, employing all the instruments afforded by democracy, in order to bring about an end to terrorism as soon as possible. The Minister and the remaining members of the Basque delegation, who today visited the Exile Memorial Museum (Mume) in La Jonquera, took advantage of their stay in Barcelona to pay homage to the victims of terrorism at the monolith erected as a memorial to the atrocious terrorist attack at the Hipercor supermarket.

The Minister for the Interior affirmed, at the end of the visit to Mume, that Governments must continue developing an anti-terrorist policy specifically aimed at eliminating the terrorist group in the shortest possible time.

According to Rodolfo Ares, "we all have to make a commitment to work towards the attainment of the greatest homage to victims: bringing about an end to terrorism." He added that the situation of "hope that we are experiencing is a result of the policy set in motion by the Basque and national Governments, a policy of democratic action."

The Minister stressed that ETA has murdered more than 50 people on Catalonian soil, members of the security forces, politicians, figures such as Ernest Llunch, civilians, women and children.

In Barcelona, the group perpetrated its most bloody act to date: the Hipercor massacre, where 21 people lost their lives and scores were injured. He also drew attention to the barbarous terrorist attack on the Civil Guard barracks in Vic, where 10 people died, including five minors.

Prior to the homage to all victims of terror, the Minister held a meeting with the Minister for the Interior within the Catalan Government, Felip Puig, wherein they analysed the political situation, agreeing to continue to intensify coordination, information exchange and cooperation between the two regional police forces, where such measures prove necessary.

Such collaborative efforts have been producing results for some time. One of the most notable successes was Operation Cornisa, coordinated from the base in Erandio by the Basque and Catalan regional police forces, the Civil Guard and the National Police Force, which enabled the arrest of one of the most active and dangerous gangs of robbers active in Spain.