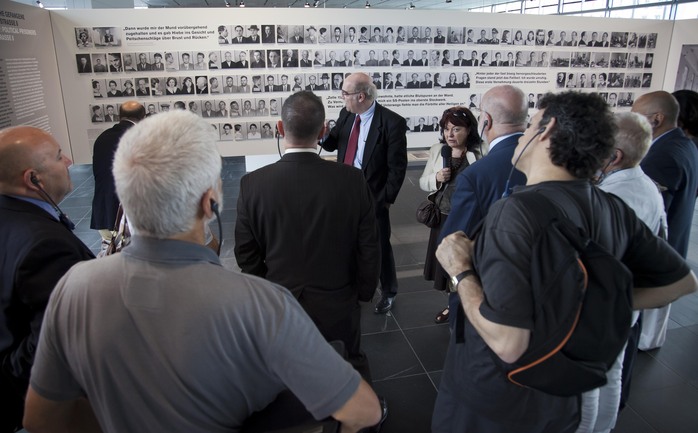 Today, in Berlin, the delegation will visit the Topography of Terror Foundation, which charts the history of the crimes committed by the Nazi regime, and the Berlin-Hohenschönhausen Memorial, which focuses on the repression of the population of East Germany at the hands of the Stasi during the Cold War.

The Basque delegation that has travelled to Germany is made up of the Minister for the Interior, Rodolfo Ares, the parliamentary members of the Victims Commission, Iñigo Iturrate, Jesús Loza, Carlos Urquijo and Aintzane Ezenarro, the Director of Human Rights within the Basque Government, Inés Ibáñez de Maeztu, and the Director of the Service for Victims of Terror, Maixabel Lasa, who will spend two days in Berlin and Catalonia as part of the preparatory work for the future Basque Memorial Centre.
Hide full article.

The Basque Country is taking preparatory steps to set up a centre to commemorate the victims of terror. The centre will ensure that "the memory and dignity of victims and justice for victims abides and aids us in the construction of a future of democratic coexistence characterised by peace and liberty," the Minister of the Interior, Rodolfo Ares, stated. With this in mind, a Basque delegation has travelled to Berlin in order to become acquainted with the experience of other places, in terms of terror and the commemoration of victims. Thus, we will be able, "with the widest possible agreement", to implement an "ambitious" project for the Basque Memorial Centre with "pragmatism and guarantees with regards to the future." The centre will serve to "honour and commemorate" the victims of terror, ensuring that "the terrible pain and suffering caused by ETA and terrorism within our society is never forgotten and that what we have endured does not occur again," Ares affirmed.

The Minister for the Interior stated that the visit to the memorials in Berlin "impressed" the Basque delegation, evidencing "the capacity of the people of Germany to carry out critique and become a reference point in terms of democratic coexistence, in order to face the future without forgetting the past."