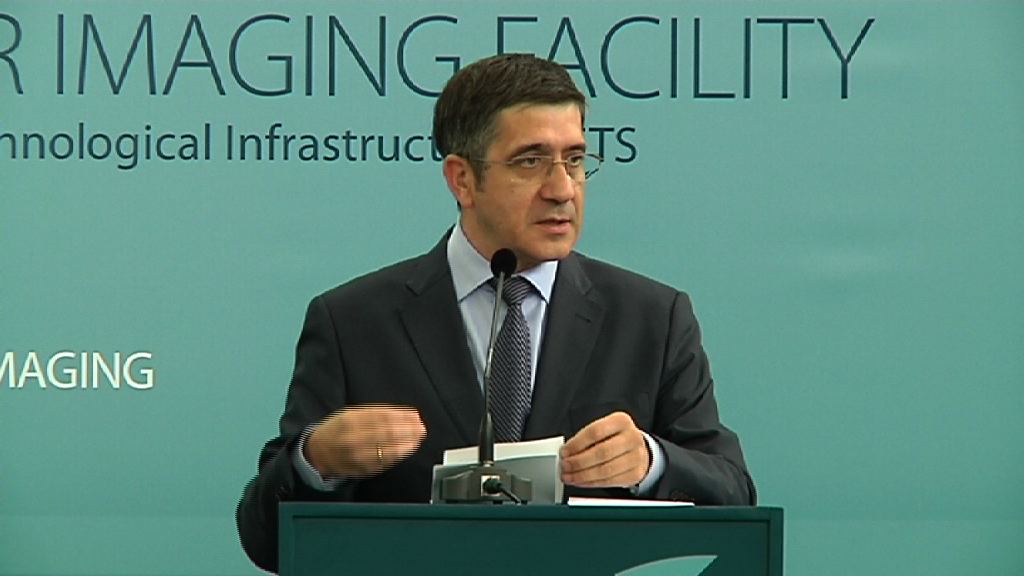 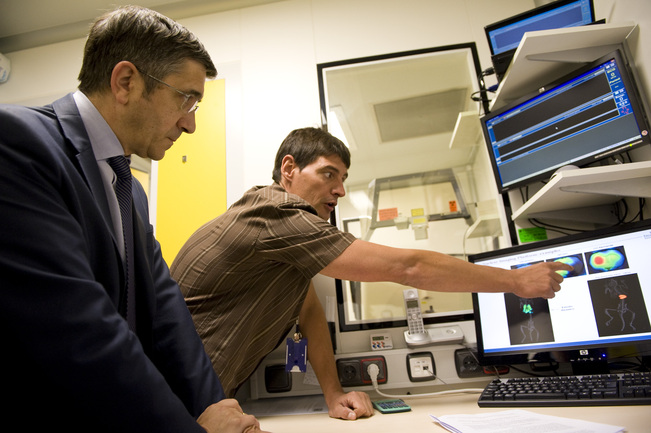 BiomaGUNE aligns itself with the 2020 EcoEuskadi Sustainable Development Strategy that aims to position the Basque Country as an "innovative, competitive, eco-efficient and open economy"

The Lehendakari, Patxi López, has inaugurated the CIC biomaGUNE new Molecular Imaging facility, which is equipped with the latest technology, placing it at the forefront of European biomedical imaging research in the pre-clinical sphere. Mr López has stressed the Basque Government's commitment to "significantly increasing the contribution of the bio-sciences sector within the economy of the Basque Country," given that "we are creating new knowledge bases that are necessary to face the problems that have arisen as a result of an economy without borders."

In this sense, the Lehendakari has emphasised the Basque Executive's commitment to "no cutbacks in knowledge or investment, in spite of the economic crisis and the austerity that we are obliged to exercise." The Science, Technology and Innovation Plan aims to mobilise collective resources, from both the public and private sectors, of more than 12,000 million euros, between now and the end of 2013. Moreover, by 2015, "we hope to boast R&D and innovation investment that amounts to 3% of the GDP, thereby complying with the objective established by the European Union."

In addition to the Lehendakari, the inaugural act was attended by the Minister for Industry, Innovation and Tourism, Bernabé Unda, the General Secretary for the Presidency, Manuel Salinero, the Mayor of San Sebastián, Juan Carlos Izagirre, the general director of CIC biomaGUNE and CIC bioGUNE, José María Mato, and the scientific director of CIC biomaGUNE, Manuel Martín Lomas.The Lehendakari reiterated the need to make a commitment "to knowledge and also to improving the quality of life of our citizens," two paths that converge in CIC biomaGUNE: "via CIC biomaGUNE we make advances towards the fulfilment of both objectives." "We are building tomorrow," he added.

The first Singular Scientific and Technological Infrastructure in the Basque Country

The new scientific facility boasts scientific equipment of the highest order, wherein attention should be drawn to the Cyclotron and the Magnetic Resonance Imaging equipment (MRI), affording the facility the status of reference point in terms of diagnosis via imaging and placing it in the vanguard of biomedical research via imaging in the pre-clinical sphere. The facility entails investment of 12 million euros and has been classified as a Singular Scientific and Technological Infrastructure (ICTS), a classification afforded to installations, resources and services within the Spanish R&D and innovation system.

The new facility aims to boost research at CIC biomaGUNE, in terms of nanomedicine and molecular imaging, and implement multidisciplinary research in order to study the development of new medicines for the pharmaceutical industry, evaluate responses to various treatments and study the physiological changes provoked by certain illnesses.

The importance of the facility within the centre in San Sebastian revolves around the fact that it brings together various techniques at the pre-clinical level (morphological and functional) within the same centre, thereby enabling the study of combining techniques: the facility is a singular infrastructure.

The functions of the facility focus on the development of new contrast agents and medicines based on nanotechnology within the pharmaceutical industry, the evaluation of responses to different treatments and the study of physiological changes that are brought about by certain illnesses.