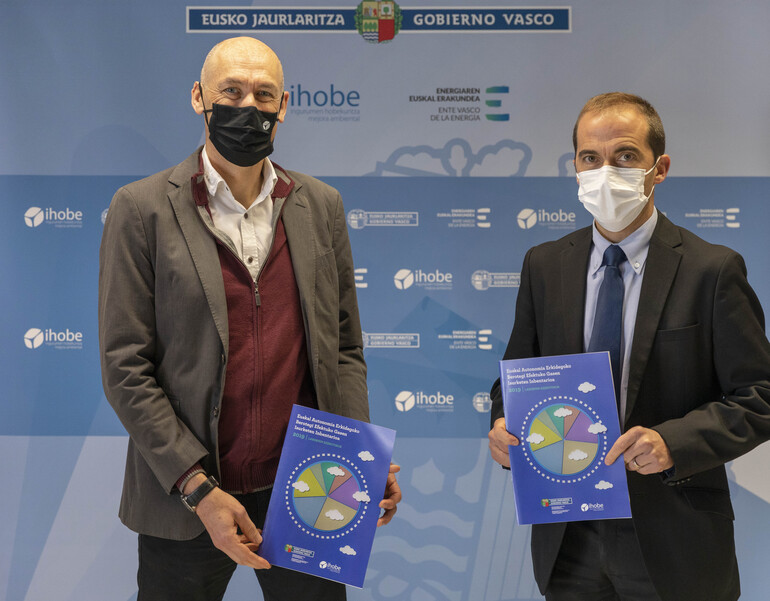 These results reflect a positive evolution, “the situation occurred in 2019 in a context of growing GDP and before the advent last year's health crisis, and are therefore the result of improved efficiency rather than the situation”, underlined the chief executives of EVE and Ihobe.

For the first time ever, the 2019 Greenhouse Gas Emissions Inventory published by the Basque Government was presented jointly by Ihobe, the Publicly-Owned Environmental Management Company of the Basque Government and Ente Vasco de la Energía (EVE). Both directors highlighted the compatibility of balancing economic growth with reducing GHG emissions. “Since 2005, our economy has grown by 20% while greenhouse gas emissions have fallen by 27%.  The reduction in emissions was achieved in a context of economic growth that shows it is possible to disconnect and uncouple growth from greenhouse gas emissions”.

The observations contained in the Inventory shows that the reduction achieved is even better than the targets contained in the Basque Country’s Klima Strategy for 2050 (and, according to this letter study, is 27% ahead of schedule).

The Inventory has followed a methodology verified by an external team in accordance with the guidelines contained in the United Nations Framework Convention on Climate Change.

The 2019, the emissions included in this report show an overall reduction in almost all sectors, with the exception of a 1% increase in farming. The transport sector cut emissions for two consecutive years for the first time in a decade, falling by 1.3% in 2018 and 0.6% in 2019.

Other sectors also reduced their emissions, namely energy (3%), industry (3%), the residential and services sectors (6%) and waste (2%). The three sectors responsible for the most emissions were energy, transport and industry, accounting for 86% of the total.

If analysed from a perspective that takes into account the fact that the energy sector supplies other sectors, emissions would be led by transport (35%) and industry (29%), followed by energy transformation (13%), while the sum of services and residential would be responsible for 15% of emissions.

Therefore, both energy efficiency and renewable energies are excellent allies in the decarbonisation process. Measures to promote careful use of energy and the renewable projects carried out in recent years in the Basque Country have shown their beneficial effect in reducing emissions while at the same time creating employment and wealth.

The inventory also analyses which sectors have made the greatest efforts to reduce emissions in the Basque Country: industry (38% compared to 2005(, energy (43% in the same period) and residential (11%). Emissions from farming and waste are also lower, although their contribution is minor.

At the same time, emissions from the services sector increased by 4% since 2005, and transport from emissions grew most of all (14% during the period). This shows a change in the trend analysed in the last two years. The figures are expected to be even lower in 2020 due to the pandemic. Approximately 96% of emissions in this sector are associated with road transport.

On the other hand, the area of land use, change of use and forestry sequestered 1.7 million tons in CO2.

A year ahead of the EU objective

When it comes to non-ETS emissions (those produced by sectors like agriculture, waste, residential, services, transport or unregulated industry), the Basque Region is going beyond the binding targets set by the European Union for the Member States since it met the non-ETS target for 2020 in 2019, which was to this type of emissions by 10% compared to 2005. The region is therefore one year ahead, having already achieved 11%.

Another conclusion drawn from the 2019 Inventory data is that the emissions from the Basque Country are on track to meet the objective of keeping temperatures below 2ºC (-25% in 2030), but not to achieve the 1.5ºC target (-45% in 2030). The Basque Government therefore considers that “we need to step up our climate ambitions”.

The Basque Region’s emission intensity is below the EU average. In other words, “we are more efficient because we generate more economy while emitting fewer GHGs than the European average,” Boto and Ansola explained. “In the last 30 years, energy intensity in the Basque Country has improved by more than 40%, which means that to produce a product unit the Basque industry needs only 60% of the energy it needed in 1991”.

Both executives agreed that, although the inventory does not account for the effects of the pandemic and reduced mobility over the past year, pollution levels fell significantly in the Basque Country in 2020. This applies particularly to the transport sector, which until two years ago was behaving differently from the rest with increasing greenhouse gas emissions.

Both Boto and Ansola pointed out that, “despite the effects of the pandemic on emissions reduction, we must continue with the structural measures launched by the Basque Government. The Climate Emergency Declaration was adopted in 30 July 2019, the inventory's benchmark year. In addition, more ambitious climate commitments are currently being sought through the future Energy Transition and Climate Change Act and its accompanying plan, as well as projects such as LIFE Urban Klima 2050 (Co-financed by the European Commission in which around 20 Basque entities participate), the Basque Hydrogen Strategy and initiatives like Ekiola for sustainable energy generation”.