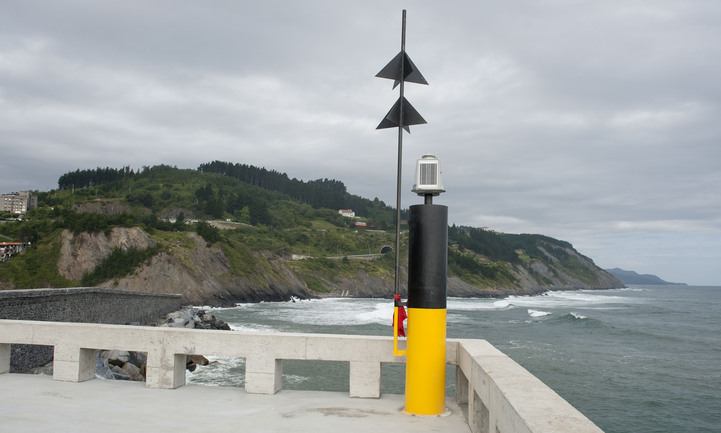 The Basque Government has invested 2.3 million euros in the Mutriku project

Today, the Lehendakari, Patxi López, officially opened the wave-energy power plant.The plant will be used for demonstration purposes and will promote the installation of plants elsewhere that can also harness the power of this renewable energy source. There are two similar facilities in Portugal and Scotland, although they are both orientated more towards research than energy production. The Basque Country plant has a capacity of 296 kW and can produce an estimated 600,000 kWh per year, equivalent to the annual energy use of 600 people. Its use of renewable energy sources will mean a reduction in pollution equivalent to the planting of 80 hectares of woodland. At 11 am this morning the Lehendakari opened the Mutriku wave-energy power plant, the first such facility in Europe to produce electrical energy from wave action. This new plant is a global benchmark and will pave the way for new marine developments and the creation of a new production sector that generates wealth and employment.

The Mutriku facility is the product of collaboration between two different departments within the Basque Government. Coinciding with a project involving the construction of a breakwater to protect the port of Mutriku, carried out by the Department for Housing, Public Works and Transport and the Department of Industry, Innovation, Trade and Tourism through the Ente Vasco de la Energía (Basque Energy Agency - EVE), it was suggested that the breakwater include a renewable-energy installation to produce electrical energy through wave action and to generate a high level of added value for this major port project.

The Mutriku power plant uses OWC (oscillating wave column) technology developed by the Scottish company Wavegen, which is part of the Voith Hydro group. It is one of the most mature wave-energy technologies on the market, and the turbines it uses were manufactured by the Basque company Voith Hydro Tolosa at its factory in this municipality in Gipuzkoa.

The Mutriku plant is also the first working sea-based installation in Spain and continental Europe to be connected to the electricity-supply network. It boasts 16 turbine chambers and a total installed capacity of 296 kW. Owing to its novelty and unique characteristics, the plant is the leading facility of its kind in Europe and will be used to demonstrate the capacity of wave energy. It will produce an estimated 600,000 kWh per year, equivalent to the annual energy use of 600 people: this clean, renewable energy will prevent the emission of 600 tonnes of CO2 per year, which is a reduction in pollution equivalent to the planting of 80 hectares of woodland.

Total investment in the project has reached 6.7 million euros, of which 2.3 million correspond to the facility itself. Of the wave-energy projects in Europe supported by the European Commission's 6th Framework Program, the Mutriku power plant is the only one that is fully installed and operational. Moreover, it is the only functioning wave-energy power plant in continental Europe.

The Basque Renewable-Energy Strategy for 2020

The Mutriku wave-energy power plant is a pre-commercial facility that will showcase and test the feasibility of this kind of installation as a source of electrical energy.
Wave energy has considerable potential as an electricity generator, given the abundance of the resource, and the Basque coast has a medium-to-high wave-energy potential of approximately 24 kW/m. This potential, allied to conditions that are not particularly aggressive, makes the region a perfect location for the installation of wave-energy-capture facilities.

The Basque Government has committed itself to developing the marine-energy sector because the Basque Country already boasts industrial, shipping and research sectors that can contribute a great deal of added value to the development of this new energy source. Given the exceptional wave resources of the Basque coast and the existing industrial community, wave energy represents a commitment to creating a new production sector with a view to widespread growth, which in turn could lead to the development of new sectors that generate knowledge, wealth and employment for Basque society.

One of the main marine-energy projects currently in the development and installation stage is Bimep, the Biscay Marine Energy Platform. Bimep is an open-sea test centre located off the coast of Armintza that enables the testing and assessment of different undersea technologies for the harnessing of wave energy. It brings together the latest technological developments and companies on the cutting edge of marine development, within a single platform, and represents a commitment to R&D in marine energy that will attract knowledge and pave the way for a new production industry.