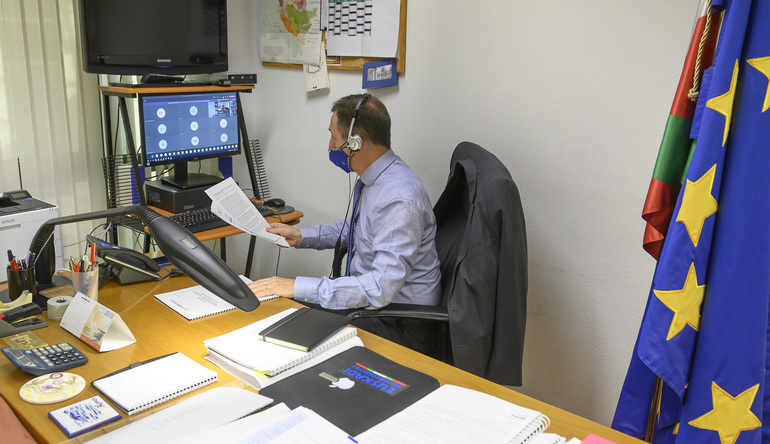 Mikel Antón Zarragoitia, director of European Affairs of the Basque Government, expressed this morning, at the meeting of the CPMR Working Group on Migration, “the need for European regional solidarity for the reception of refugees and migrants based on the Basque proposal SHARE ”. Antón links "the humanist intervention with European funding and with potential incentives for regions that host migrants or refugees."

Annika Annerby, President of the Skåne Region and Chair of the Working Group presented the meeting. Alexandra Cupsan, director of the Irregular Migration and Return Policy cabinet, and Gosia Pearson, from the same team as the European Commissioner for the Interior, Ylva Johansson, have referred to the new European Union Pact on Migration and Asylum and the status of the negotiations and regional dimension of the Pact

The "Civic and health communication: a way to fill the gap of misinformation and reach the migrant population" has been addressed by Annika Annerby; the reference to “regional solidarity” has been presented by Mikel Anton, Director of EU Affairs of the Basque Government; the topic of "Multi-level governance in the management of migrants" has been led by Jenni Korjus, head of the Regional Integration Service of the Päijät-Häme Region; and Care for unaccompanied minors has been presented by Eva Fariña, from the Department of European Affairs of the Government of the Canary Islands

"The Basque Government has welcomed the presentation, on September 23, 2020, of the EU Pact on Migration and Asylum by the European Commission". "It constitutes a new step towards the construction of a European framework, updated and with a vision of the future, for the management of migration in a supportive and sustainable way", Mikel Antón pointed out.

As expressed by the director of European Affairs of the Basque Government in the meeting held online, “we believe that the Regional Authorities of the EU should contribute to the configuration and management of this comprehensive migration approach. In the Basque Country (“Euskadi” on original language) we have detailed knowledge of migratory movements, especially secondary ones, but also those of first arrival to the EU, as well as irregular residential situations and the situation of asylum seekers”.

“We also play a leading role in the management of unaccompanied migrant minors. Furthermore, the regions and cities are the places where the integration of migrants takes place and where most public services such as health, education or social assistance are managed”, Mikel Antón insisted before the European representations on issues of Migration.

As Mikel Antón has expressed, “the Basque Government considers that there must be a necessary solidarity and joint responsibility in the management of migration and asylum in the EU, as stated in the Political Position of the CPMR of October 2020 on the Pact of Migration and Asylum. EU Member States must overcome their divisions, respect European values, and ensure that the European migration and asylum management system is based on solidarity and shared responsibility to ease the burden on frontline countries and regions”.

“The Basque Government, with the support of Spanish and French regions, recommends, through the “ SHARE ” proposal, a key for territorial distribution between voluntary states and regions based on population, GDP and unemployment rate indicators for the redistribution of refugees and asylum seekers; economic migrants in a situation of humanitarian emergency, vulnerability or awaiting regularization; and unaccompanied migrant minors”, Mikel Antón insisted.

“In addition to relocation, regional authorities can also contribute and play an important role in hosting refugees through resettlement. As an example, in 2019, the Basque Country launched a community-based refugee sponsorship initiative and, with the help of regional and national governments, UNHCR Spain, civil society organizations and volunteers, we brought 29 refugees, in 5 families, from Jordan. This experience has been a complete success and these families are fully integrated into Basque society”, explained Antón.

As Mikel Antón has explained, “it is about achieving a real integration of migrants and that they participate in the construction of a strong, supportive and sustainable Europe based on the European Pillar of Social Rights and that is why we call on the states and the Sub-state governments of the Union to initiate and multiply economic promotion actions in the countries of origin of migration, especially in Africa. It is about that, in the future, no one must leave their home and country due to the lack of social, economic, educational or health resources”.