The Public Innovation Plan will enable savings of 890 million euros 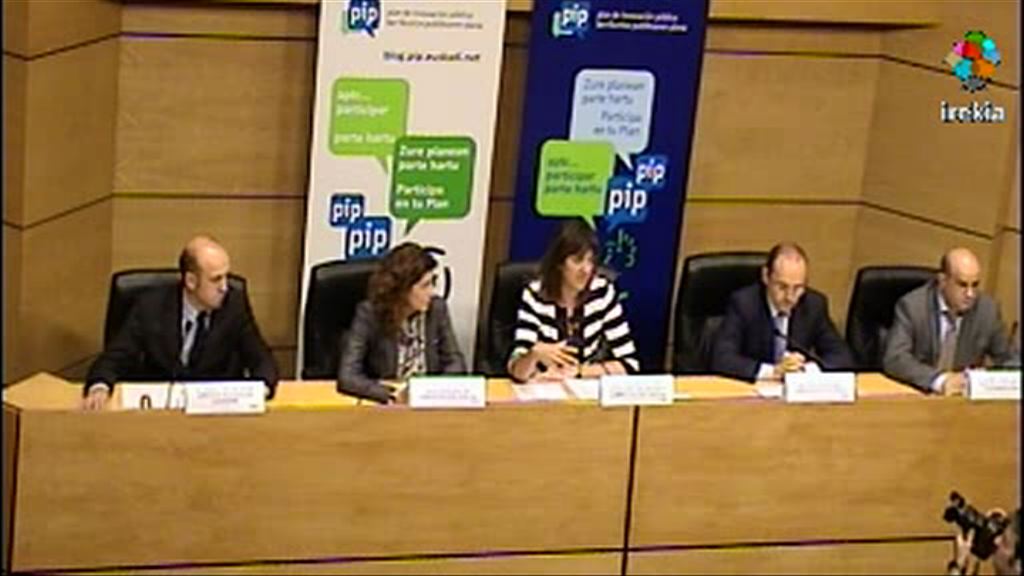 The Basque Government is making advances towards innovative and open administration via the implementation of the PIP. The aim is to complete the transition from an Administration based on paper to an Administration based on new technologies. Full implementation will require approximately 108 million euros. The reduction of 30% of red tape will permit savings of 890 million. Annual savings in Computer and Telecommunication infrastructures is estimated as 24 million euros.

On the 31st of May, the Cabinet passed the Basque Government's Public Innovation Plan (PIP). Via this instrument, wherein full implementation will require investment of approximately 108 million euros, the Executive will make advances, over a three-year period, towards innovative and open Administration that will offer society efficient, effective, secure and quality services, in collaboration with the remaining Basque institutions and with the active participation of citizens. People must be the protagonists of change.

The manner in which the plan was drawn up already serves as an example of participation and transparency. Civil servants, other administrations and institutions, trade unions, and chambers of commerce, amongst other parties, have participated via work teams (15 groups and 150 participants in more than 50 sessions). The process also boasted citizen participation through a blog (http://pip.blog.euskadi.net) and presence on social networks (Facebook, Twitter, Linkedin, Youtube, SlideShare...).

The PIP forms a part of a global, shared strategy of the Government and contributes to the construction of a modern Basque Country founded on free citizens, demonstrating solidarity amongst themselves and a vocation to construct a model of a moral society that is sustainable and competitive within an open world. The paths that it hopes to travel merge together, in the final stage, as good governance: transparency, innovation, openness and a focus on results.

The Basque Government's Public Innovation Plan will bring about a situation wherein 13 million fewer documents will be presented at the windows of the Administration.
Specific objectives for three years of PIP application (2011-2013):
- Reduce red tape in relation to the Administration.

In the EU, red tape accounts for more than 3% of the GDP and in Spain, this figure rises to 4.6%. The objective is to eliminate bureaucratic impediments and simplify procedures and processing: requests for authorisations that companies are obliged to make, certifications, etcetera. In this sense, the Basque Government hopes to reduce the administrative burdens placed on companies and citizens by 30% over the course of the next three years. It is estimated that approximately 890 million euros will be saved.

- Place 100% of public services at the disposal of citizens via digital channels.The aim is to complete the transition from an Administration based on paper to an Administration based on new technologies. The PIP promotes the digital incorporation of citizens and should give rise to the definitive implementation of e-Administration. In this manner communication channels with citizens will be modernised, huge savings will be made and internal work distribution will improve.
Citizens will witness a reduction in waiting times in terms of Administrative processing and the use of paper and the need to personally visit institutional offices will be avoided.

- Simplification of administrative procedures. Services will be simplified whilst maintaining the highest quality levels.
Via the PIP, we hope to present a clearer offer of public services, employing less cumbersome language. Citizens will be freed of the obligation to present a document that certifies information that is already held by the Administration. The objective over the course of this three-year period is to reduce certificates by 60%. Citizens and companies will have to present 13 million fewer documents per year in the windows of the Administration.

- The provision of modern and efficient information systems, technological services and telecommunication services, in keeping with the real needs of the organisation, thereby adding value within the framework of quality public services.
Annual savings in Computer and Telecommunication infrastructures is estimated at 24 million euros.

- Interadministrative collaboration and interoperability.
Duplication of work must be avoided amongst institutions and the institutional structure must be clarified in terms of relations with citizens. The exchange of information between Administrations will enable time saving and will reduce the periods required for processing, improving the efficiency and quality of services.

The Public Innovation Plan also represents a new culture of working internally within the Administration and the redefinition of the profile of certain posts. New needs will arise (website administrators, etcetera), whilst other positions will become superfluous.

In short, the PIP hopes to create a more efficient Administration, as it meets social needs: it is open, because management is transparent; it is participative in terms of decision making; and it is efficient, because it makes exemplary use of the scant resources afforded to it.

*The full content of the PIP, the Basque Government's Public Innovation Plan (2011-2013), is available for consultation via a permanent link on the following site: