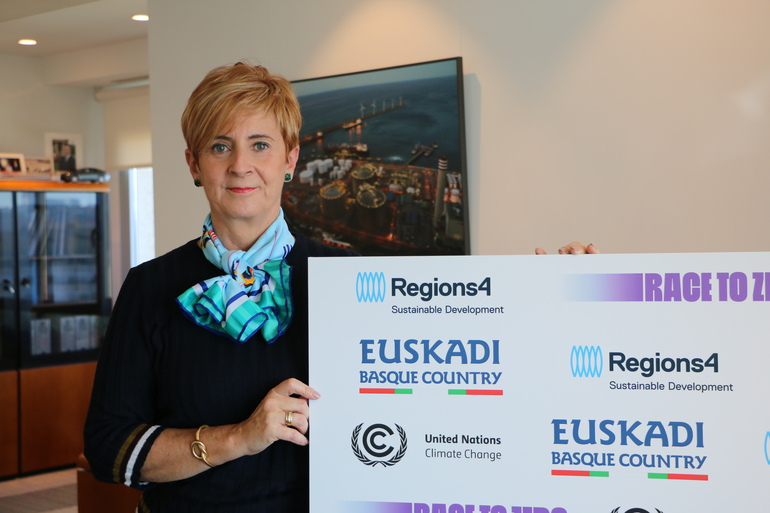 This afternoon, Arantxa Tapia is presenting the Basque Country’s work regarding climate change, with a focus on the industrial sector, and the climate change mitigation and adaptation actions being implemented in the territory. She will do so at the “States and Regions on the Path to Net-Zero”, a high-level panel where the governments of California, Baden-Württemberg, South Australia and Catalonia will also be taking part, and which is part of the UN “Race to Zero” campaign to advance towards the decarbonisation of economies.

Tapia will stress the idea that there are no shortcuts or excuses in the transition towards a net-zero society that is resilient to the impacts of climate change. Both countries and regions must set themselves ambitious targets in order to achieve the goals of the Paris Agreement. The Energy Transition and Climate Change Act on which the Basque Government is working aims to achieve net-zero greenhouse gas emissions by 2050 and advance towards a territory that is better protected against climate effects.

With its sights set on 2050, the Basque Government believes that the path towards net zero emissions must be based on the transition towards renewable energies and electrification, and on the commitment to R&D to develop new energy carriers based on renewables, such as green hydrogen. Fostering more environmentally friendly forestry and farming practices and reducing emissions of other gases, such as the methane generated in waste management, are also essential.  These measures must be backed by own financial resources, which together with the European recovery funds, will help to ensure that this transformation is fair and ecological, and that it includes all productive sectors, social organisations and the general public.

The Minister will also stress the essential role that the regions play and that it is fundamental to include regional governments when defining those targets and mechanisms, as they are the main stakeholders in the climate action to implement the major global agreements locally and regionally.

According to the UNDP, over 70% of climate change mitigation and up to 90% of the measures to adapt to its effects are adopted by local and regional authorities. Indeed, those levels of government apply 70% of all European Union legislation, which accounts for third of public spending and two thirds of public investment. Consequently, regions play a crucial role in achieving the goal of net zero emissions by 2050.

Furthermore, Tapia will advocate for deploying cooperation mechanisms with developing countries to facilitate technology transfer, prevent carbon leakage and avoid deforestation by supporting sustainable management of forests, among other aspects.

During the COP25 Climate Summit held in Madrid last December, the Climate Ambition Alliance: Net Zero 2050” was unveiled. This initiative brings together governments, companies and civil society organisations who are working towards achieving net-zero CO2 emissions by 2050, and important progress has already been made in 2020.

In June 2020, the United Nations launched the “Race to Zero” campaign to mobilise non-state actors to join the alliance. Local and regional governments thus show their commitment to more ambitious actions and long-term actions to achieve the Paris Agreement targets as soon as possible. Those experiences are shared by means of the “High Level Dialogues”, such as the panel on which Minister Tapia is going to participate and which has been organised by the Under2 Coalition international network, with the support of the Network of Regional Governments for Sustainable Development-Regions 4, the Government of California and United Cities and Local Governments-UCLG.

Thanks to its international leadership, the Basque Country is one of the 22 regions of the world belonging to the Climate Ambition Alliance given its commitment to push for the territory to be net zero by 2050 or earlier. One of the most important milestones was the climate emergency declaration by Lehendakari Iñigo Urkullu, the Basque Premier, in July 2019.

Minister Tapia will also take part tomorrow (Thusday) in the international forum on sustainable development organised by the Government of Lombardy (Italy). She will there share the Basque Government’s experience in designing sustainability policies by means of legislation, investment, training and alliances with non-governmental stakeholders, and thanks to its leadership at the head of the Network of Regional Governments for Sustainable Development-Region4; a network that brings together 50 regional governments from around the world and which the Basque Country chairs.