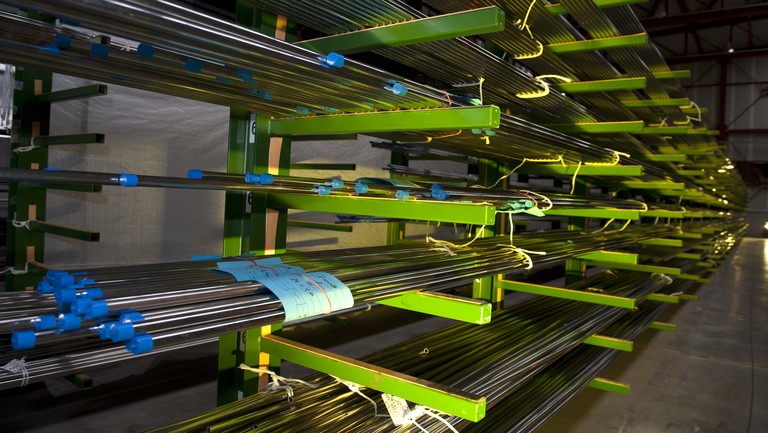 The Basque group, which promotes specialisation in high quality products, is already manufacturing its first order relating to oil extraction in the North Sea.

The Minister for Industry ended the institutional visit to Germany and Austria with a "very positive" impression.

The Minister for Industry, Innovation, Trade and Tourism, Bernabé Unda, today participated in the inauguration of the new plant, which the Basque group Tubacex has celebrated in its affiliate company Schoeller Bleckmann Edelstahlrohr GmbH (SBER), based in the Austrian locality of Ternitz.

The new centre is dedicated to the manufacture of umbilical tubes (offshore), a product aimed at support activities within the exploitation and extraction of oil and gas in critical conditions of pressure, temperature and corrosion.

The Tubacex Group has invested almost 40 million euros in this project. The act also included the intervention of Josef Leitner, Deputy Governor of Lower Austria, the federal state where the factory is located, the General Secretary for Innovation within the Spanish Ministry for Science and Innovation, Juan Tomás Hernani, the Spanish Ambassador to Austria, Yago Pico de Coaña, the Director of SBER, Erich Hertner, and the President of the group from Álava, Álvaro Videgain.

The act was also attended by high-ranking representatives of the Governments of Lower Austria and the Basque Country, board members of Tubacex and the heads of the Group, along with the main manufacturers within the field of umbilical tubes and clients of the products to be manufactured at the installation.

The new plant, construction of which began in 2008, is a technological reference point at global level in these types of installations and is already manufacturing the first order, entailing the extension of an oil field in the North Sea owned by a company that is a global leader in the oil and gas sector.

Investment of more than 50 million

In total, the Basque Country has made an investment of more than 50 million euros in these projects in the Austrian plant. Between 2007 and 2010, investment in the various factories within the Group, largely linked to the implementation of the Strategic Plan, rose to 113.37 million euros, almost 30 million per year.

Schoeller Bleckmann Edelstahlrohr GmbH (SBER) is a company with a long industrial history, established in 1840. The company became a part of the Group in 1999, subsequent to the acquisition of the entirety of its shares by Tubacex. Over the course of 2010, SBER registered sales of 109.57 euros, 14.2% more than 2009, wherein sales of 95.95 million euros were registered.

The Tubacex industrial group was founded in 1963 and its activity revolves around the manufacture of stainless steel tubes without welding. The headquarters of the Group are located in Llodio and it also has industrial installations in this locality, in Amurrio and in Arceniega (all pertaining to the province of Álava), in Ternitz (Austria) and in Greenville, Pennsylvania.

During today's act, the minister drew attention to the efforts of Tubacex in terms of internationalisation and described the company as an "undiscovered champion". "It is one of our most important companies", he explained, "a niche multinational that is a world leader within its sector. A champion within this niche."

Unda reaffirmed the commitment to multi-localisation as "projects such as the Tubacex project, involving extending overseas, create wealth wherever they set up, in this case in Austria, guaranteeing employment and well-being in homes." "It is not a question of mature or emerging sectors, it is a question of good and bad companies," the minister stressed. "In the Basque Country we have made a commitment to an economy that is open to the world. We have made a commitment to search for reliable parts and to be a reliable partner."

The minister ended today's institutional visit to Germany and Austria, primarily focused on support for Basque companies, particularly within the motor sector, with a "very positive" impression.

The objective of strengthening the interests of Basque companies in these countries has been fulfilled. The minister defended the competitiveness of the Basque industrial network before large companies, such as BMW and Mercedes, and institutions, such as the Bavarian Government, the Fraunhofer technology centre and the Chamber of Commerce of Munich.

Furthermore, he proposed agreements with these bodies for the exchange of interns, in such a manner than young Basque people will be afforded the opportunity of acquiring more extensive training and education and the Basque Country will be able to attract talent from other European Countries.