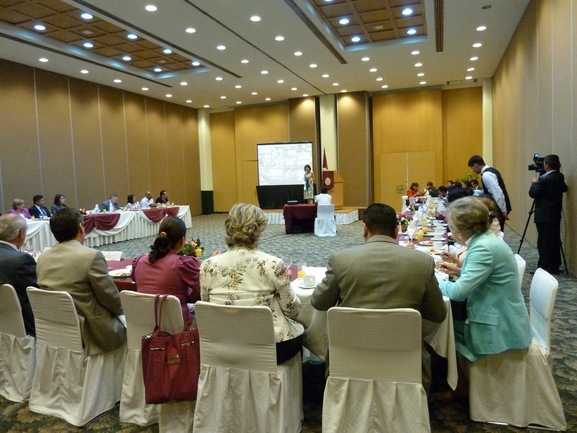 At the behest of the Citizen's Parliament of Mexico, Nagore de los Ríos has presented the Open Government in Mexico City.

The Director of Open Government and Internet Communication, Nagore de los Ríos, has travelled to Mexico City to present the Open Government in an address delivered before the members of the Citizens' Parliament. The Citizens' Parliament is an organisation that aims to promote a culture of respect amongst citizens via action focusing on politicians. It is a participative organisation that defends citizens' interests.

The Citizens' Parliament of Mexico was created when a group of citizens foresaw the need to promote a culture of respect towards citizens that was inexistent. The objective was to facilitate the ability to "talk with politicians as equals", as President Américo Alotorre affirms. It was initiated 10 years ago in Guadalajara, Mexico, as the Citizens' Council, to fight against the policies of the Governor. It soon acquired a parliamentary structure and today it is the only organisation recognised by the UN as a citizens' body. It now boasts various companies for financing, a communications network, the largest database in Mexico and the first TV via Internet system in Latin America.

The Director of Open Government and Internet Communication, Nagore de los Ríos, was also interviewed on the Efekto TV channel, where she explained the cornerstones on which Irekia, the web page of the Basque Government, is constructed: transparency, participation and collaboration. With these principles in mind, Irekia hopes to increase citizen participation and improve relations between citizens and the administration. It is the first Open Government initiative in Spain and has been personally promoted by the Lehendakari, Patxi López, subsequently arousing the interest of the Mexican government.