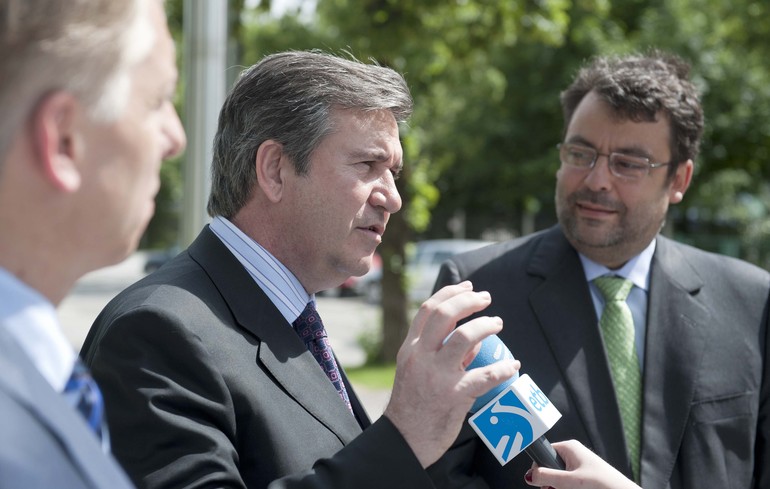 Minister Bernabé Unda proposes increasing the number of interns working abroad to 500, and trusts that banks will help finance the initiative

The Basque delegation visited the Fraunhofer centre, Europe's leading technological facility, which is currently implementing over 50 projects in collaboration with Tecnalia and IK4. The Basque Government will present the German model to its chambers of commerce, "so that they can apply the knowledge gained from it to their own processes, particularly in terms of internationalisation"

A delegation headed by Bernabé Unda, the Minister for Industry, Innovation, Trade and Tourism, today visited the Chamber of Commerce and Industry for Munich and Upper Bavaria in order to find out more about the dual system of professional training that has been implemented in Germany, in addition to the services offered to companies by chambers of commerce and the role they play in terms of collaborating with the government.

The Basque Government is exploring the possibility of collaborating with the Munich Chamber of Commerce as a way of strengthening its international approach. One of the issues discussed today by the Basque delegation and the Bavarian institute, led by President Peter Driessen, was the possibility of operating an intern exchange. Unda proposed the creation of a collaboration agreement with the business development agency SPRI that would enable Basque interns to gain work experience in German companies, and vice versa.
As a result, at the end of the meeting the minister announced his proposal to increase the number of interns "until we reach 500", so that they have the opportunity to gain work experience in companies and organisations abroad. This year the international grants programme was extended to a total of 85 interns, following a considerable increase over the past two years (beginning with a total of 40 in 2009).

Unda remarked that relations with the German Chamber of Commerce in Spain were now very smooth: "We know the training models that they have implemented in Barcelona and, thanks to this relationship, we want to put the knowledge we gained in Munich to the test".

The Basque Government will also examine the details of the German model with the Basque chambers of commerce, "so that they can apply the lessons learnt from it to their own processes, particularly in terms of internationalisation", said the minister.

At the same time, the Vice Minister for Trade and Tourism, Pilar Zorrilla, was discussing the organisational model used by the chamber of commerce to make trade within the city of Munich more dynamic. She also learned about the public-private funding of projects related to the sector and the programmes of excellence. For its part, the Basque Government shared its experience of the pilot programme implemented in the Basque Country involving the creation of new quality certification for the commercial sector.

"There are many similarities between our methods of promoting commerce", said the vice-minister. "However, perhaps the biggest difference is in the way that organisations to boost city commerce are funded: while in our case almost 90% of the money comes from the Basque Government, in Germany it's funded almost entirely by the private sector".

Another important stop on today's itinerary was Fraunhofer, Europe's leading technology centre. The Basque Government representatives were accompanied on their visit by Javier Ormazabal, the President of Tecnalia, and Juan María Iriondo, the President of IK4.

The trip to the facility enabled those present to examine governance systems and gain in-depth knowledge of models for the better measurement of the results of R&D projects. The visitors also learned about the sources of the Fraunhofer centre's funding.

By any yardstick, the relationship between the two Basque facilities and their German counterpart is very close, and at present, Tecnalia and IK4 are implementing around 50 projects in collaboration with Fraunhofer.

Also participating in the meeting that took place at the centre were four members of the Basque Parliament's Industry Committee, who also form part of the Basque delegation: Estíbaliz Hernaez, Joana Madrigal, Carmelo Barrio and Josu Osés.