The Basque Country looks to strengthen its relationship with BMW, which is already working with 20 Basque companies 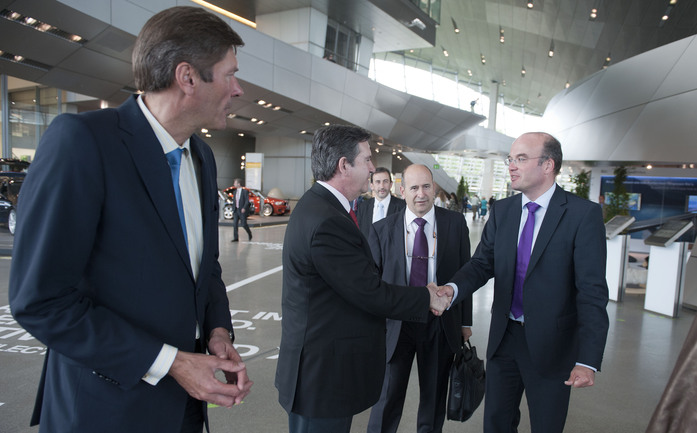 The Basque Government's Department of Industry, accompanied by representatives of the ACICAE automotive cluster, travelled to Munich to find out about the German firm's latest projects.

Minister Bernabé Unda exchanged information with the Bavarian Government on industrial policy, entrepreneurship and R&D and training policy, and looked for areas in which the two regions could collaborate.

The automotive sector represents 30% of Basque industry and accounts for 17% of the region's GDP. One of the reasons for the sector's prominence is the efforts made by Basque companies to focus on exportation and internationalisation: Germany is one of the Basque Country's main markets while BMW is one of the region's biggest clients, placing its trust in the high-quality automotive components manufactured in the Basque Country.

It was within this context that Bernabé Unda, the Minister for Industry, Innovation, Trade and Tourism, travelled to BMW's headquarters in Munich. He was accompanied by a delegation from the Basque Parliament's Board of Industry and representatives from the ACICAE automotive cluster, and took the opportunity to round off the presentation made in September 2010 by the Basque automotive sector in BMW's procurement department.

The Basque delegation visited the company's Munich headquarters in order to find out about its latest projects and discuss ways in which Basque suppliers could contribute to the success of its launches through their high-quality technological and service-related contributions.The Minister also expressed an interest in BMW's management system, which enables employees and trade unions to become involved in the company's development strategies. Unda also met with Thomas Becker, the Vice President for Governmental Affairs, and Wolfgang Bogoll, the company's General Manager for Spain, Portugal and North Africa, with whom he spoke about the opportunities for foreign companies to collaborate in R&D projects and set up initiatives in the Basque Country.

Moreover, he also offered BMW the chance to receive interns from the Basque Country, thanks to a "model that has functioned very well over the last few years, in Chambers of Commerce as well as in companies".

In today's series of meetings the Basque Government representatives met the heads of two Bavarian Government ministries. During his meeting with the Bavarian Secretary of State for Education and Culture, Unda proposed a scheme whereby postgraduates and degree-holders from the Basque Country could access internships in Bavaria.

He also found out more about the region's dual-training system, which is based on combining theoretical study and work experience undertaken with companies. "Around 20% of young people are taken on by companies thanks to this system", Unda explained. "It requires an agreement between the employers' association and the unions. It has taken Germany many years to successfully implement the system, but we believe that the Basque Country also needs an agreement of this kind".

Throughout the course of the meetings, Unda also learned more about how German students assimilate the culture of internationalisation and how their preparation for the business world begins when they are still at elementary school.

He took the opportunity to exchange information on the role played by regional industrial policy in economic recovery and on the most successful policies in Bavaria and the Basque Country in terms of industry and tourism.

The meetings also enabled Unda and his Bavarian counterparts to analyse the possibility of collaboration between their two regions in fields of common interest such as renewable energies, electric vehicles, biosciences and new technologies. The Industry Minister described the decision taken by Germany and the Bavarian Government to completely phase out nuclear power plants over the next ten years as "startling", and remarked that "It will involve costs for the system and for citizens and will also have an effect on industry".

Germany is the Basque Country's second most-important trading partner, while Bavaria, with its 12 million inhabitants, is one of the leading regions in the industrial sector and in terms of innovation. Germany accounts for 34% of foreign investment in the Basque Country.

Unda highlighted the "parallels between Bavaria and the Basque Country in terms of energy" and in terms of the cluster systems associated with certain economic sectors.