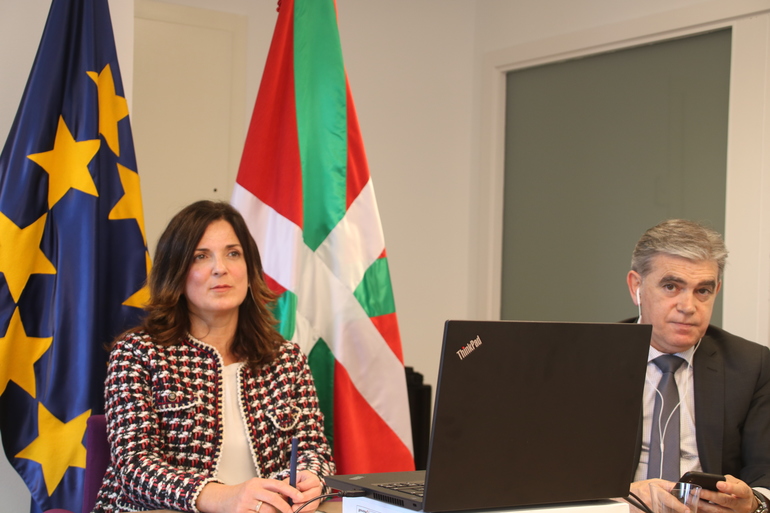 This morning, the Basque Government Deputy Minister of Employment and Youth, Marcos Muro, started the procedure of transferring to the representatives of the Government of Aragón the six-monthly autonomous communities representation to the EPSCO Employment, Social Policy, Health and Consumer Affairs Council of Ministers. From July 1, Aragón will take over from the Basque Country in autonomous communities coordination on matters of social affairs and employment which, among other initiatives, establishes intervention by the incumbent Autonomous Community in the Council of Ministers in order to present the common positions reached in preliminary discussions and works.

Among the subjects addressed in the first three months of 2020, coordinated by the Basque Country and agreed to with the Autonomous Communities, were particularly those related to “A Just Transition”, “Demographic challenges” and “Life-work balance and long-term care”.

Marcos Muro commented that “our six months, presided over by Croatia, has been affected by the Covid-19 crisis, meaning that the usual Council meetings held physically in Brussels were unable to go ahead, having been substituted by videoconferences attended, on some occasions, by Minister Artolazabal as the autonomous communities representative. This presence is important, just as it is that the states listen to and assume the vision and proposals of we countries, regions and autonomous communities with the greatest knowledge of this type of social environments”.

At an internal videoconference held from Brussels, the Basque Country gave Aragón a detailed explanation of the steps taken in the autonomous communities representation to the EPSCO Council of Ministers of Employment and Social Policies and the forecasts for the second six months of 2020 to be presided over by Germany.

Miguel Fernández, Reper counsellor, explained the “difficult conditions of the first six months of 2020 when the objectives focussed on demographic challenges and improving the skills of the unemployed, having failed to reach an agreement on life-work balance due, among others, to the position of Hungary”. The German presidency, from July 1, logically depending on the situation of Covid and its hypothetical new outbreaks, is finding it difficult to establish clearly defined agendas, although, in principle, October 13 in Luxembourg and December 3 in Brussels have been pencilled in as dates for the two EPSCO Councils of Ministers.

The main pending subjects of the EPSCO Council’s working groups for the second six months are the closure of Social Security regulation 883, debate on presentation of the proposal on a minimum wage, closure of the negotiated agreement of the European Globalisation Adjustment Fund and the reinforced Youth Guarantee. An analysis will also be made of the situation of seasonal workers (temporeros), platform workers, guaranteed minimum income, the rights of the elderly, child protection, the paid and unpaid work of women, gender equality and gender pay transparency.

Precisely tomorrow, Wednesday, the European Commission will publish its report on demographic situation and challenges, an area of special interest both for the autonomous communities and for the State. The October EPSCO Council could make a reference to Minimum Income. Santiago Rodriguez Uriel stressed the importance of the Pillar of Social Rights “as the working basis for any kind of conclusions and initiatives in the area of employment and social policies”.

On behalf of Aragón, Raúl Camarón, Managing Director of the Aragón Institute of Employment; Federico Abizanda from the Department of Citizenship and Social Rights; and Carlos Gómez, Director of the Aragón Office in Brussels, participated in the transfer meeting. The participants in the meeting on behalf of REPER were Santiago Rodriguez Uriel, Regional Affairs Counsellor of the Permanent Representation of Spain to the EU  and the counsellors Aurelio Fernández, Miguel Fernández and Juan Antonio Elena. Attending on behalf of the Basque Country were Marcos Muro, Basque Government Deputy Minister of Employment and Youth, and Marta Marín Basque Government delegate to the European Institutions in Brussels.