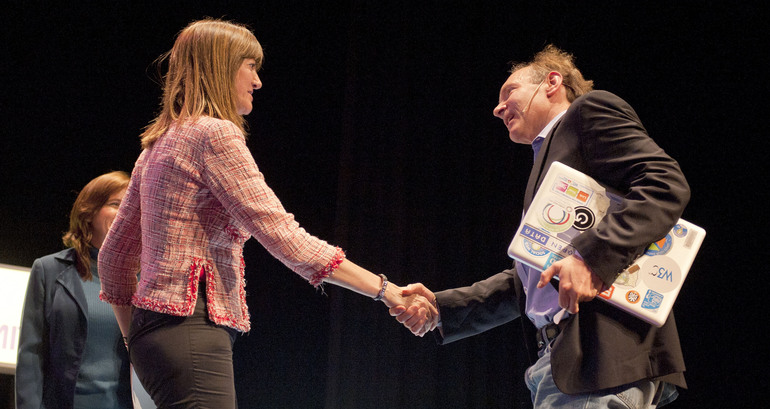 Today the Bilbao Web Summit, which has been held in the Euskalduna Conference Centre, drew to a close

Idoia Mendia discussed the issue of e-Government with Tim Berners-Lee, the inventor of the World Wide Web, and stated that "our objective is to reduce the need for accreditation by 60%. We have to put a stop to this situation in which the Government asks citizens for papers that it already has in its possession".

Today Idoia Mendia, the Basque Government's Minister for Justice and Public Administration, addressed those present at the closing day of the Bilbao Web Summit. She spoke during a session examining the issue of e-Government, in which she shared experiences and opinions with Tim Berners-Lee, who is known at global level as the inventor of the World Wide Web. Also contributing to the debate were Jeanne M. Holm, the Chief Knowledge Architect at the Jet Propulsion Laboratory and head of NASA's Knowledge Management team, and José Manuel Alonso, the head of the Open Government Unit at the Centro Tecnológico de la Información y la Comunicación (Technological Centre for Information and Communication - CTIC).

The minister also explained (in English, the official language of the summit) the Basque Executive's open-government and e-Government-development policies, citing initiatives designed to increase transparency in public management (such as Irekia and Open Data Euskadi) and mentioning the forthcoming Public Innovation Plan (PIP). The plan details the Basque Government's intentions to create an innovative, open public administration that offers society services that are high quality, efficient, effective and safe, in collaboration wider society with the active participation of citizens.

She went on to defend the idea that citizens should not have to present any documentation to accredit data that is already in the hands of any public administration: "Our aim is to reduce the need for accreditation by 60%. We have to put a stop to this situation in which the Government asks citizens for papers that it already has in its possession", she said. The minister also referred to government payment gateways as a good example of inter-administrative collaboration, as they are now being used by around 150 public administrations and last year were employed to make 136,990 payments, accounting for almost 28 million euros (€27,978,510.70).

The Bilbao Web Summit opened its doors yesterday in Bilbao at the Euskalduna Conference Centre. It is a global event involving debates between leading international experts on issues such as the future of the Internet and the design of the next incarnation of the Web from a business perspective. The summit has a markedly international flavour with the involvement of senior executives, economists, strategists, innovators, technology managers and other actors who play a decision-making role in relation to the use of the Web and who will, therefore, also play a role in the development of its next incarnation.

The event is aimed at general, financial, communications, technology and marketing managers who have an interest in technology and the best practices.