The Basque Country and Lombardy develop closer ties for tourism 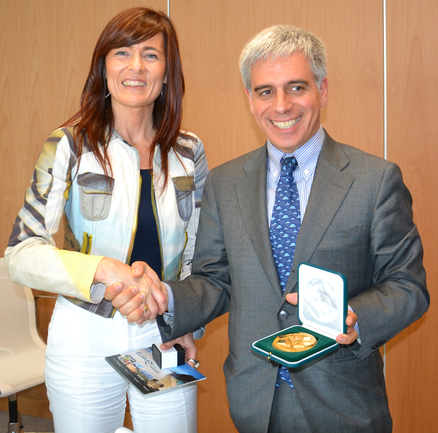 The Basque Country and Lombardy are looking to sign a collaboration agreement covering areas such as design, music and gastronomy, while today the Italian edition of the prestigious tourism magazine Condé Nast Traveller presented a special supplement focusing on the Basque Country. Last year over 45,000 Italian tourists visited the Basque Country, an increase of 6% over the previous year.

Relations between the two regions have become stronger thanks to last year's restoration of direct flights from Bilbao to Rome and Milan, which has opened up a new gateway for Italian tourists and business travellers.

The meeting between the representatives of the two regions took place within the framework of the Basque Government's program to promote the Basque Country as a tourist destination in Italy. The program is organised by the Department of Industry, Innovation, Trade and Tourism via Basquetour, the Basque tourism agency.

The promotional activities were carried out on the 16th, 17th and 18th of May in Milan and Bergamo, and after this afternoon's meeting with the minister for the Italian region a special supplement on the Basque Country was presented by the Italian edition of the prestigious tourism magazine Condé Nast Traveller.

The publication of this special supplement shone a spotlight on the Basque Country as a tourist destination and was intended to capture the attention of the specialist press in Italy, tour operators, consumer-clubs for different products, representatives of large Italian companies and those responsible for organising incentive trips.

Those attending the presentation included Vice-Minister Pilar Zorrilla, Director of Tourism Isabel Muela and the director of the Italian edition of Condé Nast Traveller magazine, Roberto Delera. Zorrilla took the opportunity to highlight the importance of Italy as an exporter of tourists to the Basque Country: during 2010, 45,784 Italians stayed in Basque hotels and rural accommodation. This figure represents an increase of 6% over the previous year and places Italy fourth in the list of the Basque Country's most important European markets, behind France, the United Kingdom and Germany.

The Vice-Minister also encouraged Italians to visit the Basque Country this summer and take advantage of the different forms of tourism available: although the majority (74.6%) come to visit the region's cities, the Basque Country now boasts a range of alternative attractions, such as rural tourism aimed at families, city breaks for couples and journeys across the entire Basque Country with friends, experiencing its local fiestas and customs.

Zorrilla went on to remind those Italians planning their holidays that it is now possible to fly to the Basque Country thanks to the new routes between Milan and Bilbao. Sixty-one percent of Italian tourists to the region still come by car.

The tourism-promotion program began on the 16th of May with a workshop held in Milan attended by around 90 people, most of whom were Italian businesspeople from the tourist industry looking to establish commercial relationships with Basque companies in the same sector.

The Basque Country's presence in Italy drew to a close in Bergamo on the 18th with a special event organised by Turespaña. Entitled ‘La Spagna Itinera' (Spanish Routes), it took the form of a mobile marketing campaign aimed at both tourist companies and potential tourists among the general public, and was designed to respond to the transformation of a market characterised by an increase in air routes and the increasingly important role played by new technologies in making decisions regarding travel.

The event also aimed to strengthen and extend to other cities the now-consolidated annual campaigns ‘From Spain to Milan' and ‘From Spain to Rome', in order to raise awareness within Italy of Spain as a tourist destination.