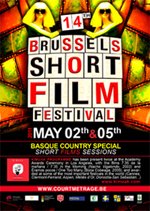 The first European Season of Basque Culture and Talent: 25 years of representing the Basque Country in the EU

The Basque Delegation in Brussels, the Etxepare Institute, the Basque Film Archive and the candidature of San Sebastian for European Capital of Culture 2016 give a strong showing in Europe for the Basque audiovisual industry

For the first time, Basque short films had the honour of being given specific screening sessions at the Brussels Short Film Festival, the 14th edition of which has recently drawn to a close in the Belgian capital.

Through an initiative of the Basque Delegation in Brussels, Basque participation in the short-film festival formed part of the programme of activities that the delegation has developed for the first European Season of Basque Culture and Talent, in collaboration with the Etxepare Institute, the candidature of San Sebastian for European Capital of Culture 2016 and the Basque Film Archive.

A wide variety of cultural activities have been organised in the areas of literature, cinema, art and music to draw attention to Basque culture and talent, both in Belgium and in the European Union, and to consolidate collaborative ties with cultural institutions and industry professionals and strengthen Basque presence in festivals and events organised by cultural and creative industries.

Seven Basque short films were included in the programme and one was shortlisted for the International Award at the Brussels Short Film Festival, within the framework of the European Season of Basque Culture and Talent

The Basque Delegation in Brussels and the Etxepare Institute, in collaboration with the Basque Film Archive and the candidature of San Sebastian for European Capital of Culture 2016, promoted and ensured the inclusion of Basque short films in the Brussels Short Film Festival, which was attended by over 21,000 cinemagoers, 400 industry professionals and a number of representatives from television stations across Europe.

The Basque short films presented were well received at the festival and garnered praise for their creativity and quality from the festival organisers, industry professionals and general public alike. A total of seven films were presented, with Kote Camacho's La Gran Carrera (The Great Race) shortlisted for the International Award. Moreover, the Basque short films in the Basque Film Archive's Kimuak programme were actively involved in promotion and presentation initiatives aimed at the representatives of other high-profile film festivals and European television stations.

The seven Basque short films that featured at the 14th Brussels Short Film Festival were presented within the framework of the first European Season of Basque Culture and Talent, an initiative jointly developed by number of different Basque institutions. The films, which were noted for their creativity and quality and were directed by both new and experienced directors, were:

Many of the films presented formed part of the Kimuak programme, which is run by the Basque Film Archive with the support of the Etxepare Institute and the Basque Government's Department of Culture, which is responsible for providing an annual selection of the best Basque short films.

Under the coordination of the Basque Delegation in Brussels and with the participation of the Etxepare Institute, taking advantage of the important cultural events in the Belgian capital and featuring distinguished figures such as Bernardo Atxaga along with new Basque talent, the first European Season of Basque Culture and Talent boasted the following programme:

- The "Donostia-San Sebastián: waves of citizen energy" exhibition was on display in the European Parliament between the 28th of February and the 4th of March.

- The Passport Literary Festival, in which Bernardo Atxaga participated alongside other major European literary figures, took place on the 27th of March at the Théâtre Royal de la Monnaie in Brussels and enjoyed the support and participation of the Instituto Cervantes.

The "Ghosts in Armour" exhibition, an art exhibition jointly organised by Basque, Welsh and German artists focusing on industrial transformation and art, was on display in the European Parliament from the 28th of March to the 1st of April.

- The Brussels Short Film Festival, which honoured Basque cinema with special sessions for Basque short films. These sessions were open to the general public and to industry professionals, and enjoyed the participation of the Basque Film Archive.

- The Basque Folk Concert featuring Xarnege took place in Brussels on the 20th of May.

The first European Season of Basque Culture and Talent has been organised as part of the celebrations to mark 25 years of Basque representation in Brussels and the foundation of the Etxepare Institute.

This initiative represents a firm commitment to overseas action by the Basque Government, which aims to promote and raise awareness abroad of well-known figures and new values.