IKERBASQUE brings 70 researchers together at the San Sebastian Talent House 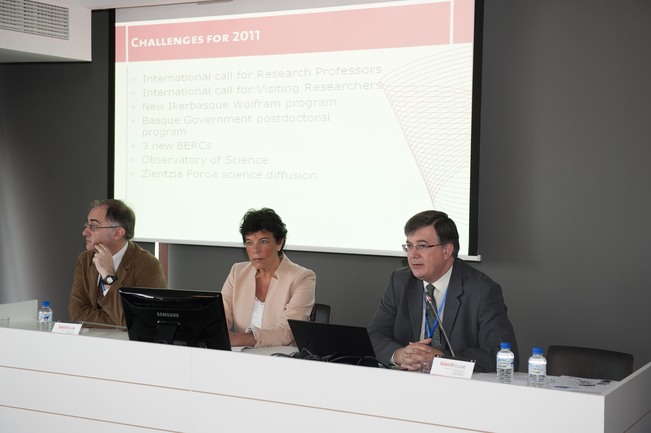 The meeting, in which scientists of all nationalities working in Basque research centres and universities shared their experiences, took place at the Talent House residential facility in San Sebastian and was attended by representatives of the Basque Foundation for Science (IKERBASQUE), the Basque Government and Universidad del País Vasco-Euskal Herriko Unibertsitatea (the University of the Basque Country - UPV/EHU). The Basque Minister for Education, Isabel Celaá, spoke to researchers about the general scope of science policy in the Basque Country and the results obtained by IKERBASQUE to date. IKERBASQUE and the San Sebastian Development Agency have signed a collaboration agreement on welcoming scientists to the city and helping them integrate, alongside promoting scientific activities with a view to publishing their results.

IKERBASQUE brought together a large number of the international researchers working in San Sebastian to participate in a meeting designed to enable the sharing of experiences and the creation of a knowledge-transfer network. The event was attended by 70 scientists from a total of around 20 countries, who have come to work in a range of different knowledge areas in universities and R&D centres around the Basque Country.

The meeting took place at the Talent House residential facility, which was set up to welcome researchers to the city and help them integrate, and was attended by representatives of IKERBASQUE, the Basque Government and UPV/EHU. Also present was Odón Elorza, the mayor of San Sebastian. The seminar was structured according to the World Café methodology, which involves collaborative dialogue among small groups culminating in an open session of opinion-sharing, followed by lunch.

The main aim of the event was to facilitate the sharing of personal and professional experiences among scientists from widely divergent disciplines, with a view to the creation of a network for knowledge transfer between professionals from different countries that are working in different faculties at the UPV/EHU and another ten research centres across the Basque Country. As the professionals in question come from a wide variety of backgrounds, information on their needs and suggestions in terms of social and family-related integration was collected.

During the meeting the Minister for Education, Isabel Celaá, spoke to the researchers about the general scope of science policy in the Basque Country, while the Professor of Chemistry and President of IKERBASQUE's Executive Committee, Fernando Cossío, gave a presentation on the results obtained by the foundation to date. A collaboration agreement between organisers IKERBASQUE and the San Sebastian Development Agency, a public company dedicated to the promotion of economic and social activities in the city, was signed to coincide with the meeting.

The San Sebastian Development Agency recently opened the Talent House, an 80-apartment residence designed to welcome researchers from all over the world who come to work in Gipuzkoa. Under the terms of the agreement, the Talent House will become home to IKERBASQUE researchers and the San Sebastian Development Agency will provide support services to facilitate their integration into society and the workplace, while IKERBASQUE will implement initiatives to develop a programme to promote and disseminate knowledge in San Sebastian. «

«IKERBASQUE is the result of a Basque Government initiative implemented through the Ministry of Education, Universities and Research that aims to strengthen the commitment to scientific research that has been demonstrated over a number of years by successive administrations and by universities and companies in the Basque Country; a commitment that was also formalised in the Basque Plan for Science, Technology and Innovation.

To contribute to the efforts to make the Basque Country one of the leading centres for R&D&I, IKERBASQUE's key activities include attracting talent and creating Centres of Excellence in Research.