Iñaki Arriola: “The ecological transition must be as fair and balanced as possible, and it must be properly funded” 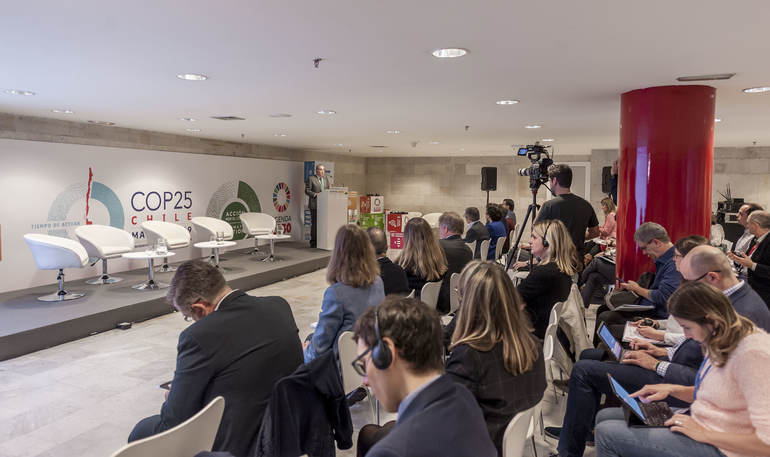 The fight against climate change will oblige us to mobilise huge sums of public and private money as well as public-private collaborations in the years to come. We still do not know how this will be achieved, which sectors will be prioritised and how it will be managed... To make progress with this crucial issue, the Basque Government, in collaboration with the Ministry for Ecological Transition, organised a seminar entitled ‘Funding Climate Action’ as part of the Official Green+25 Agenda at the Global Climate Summit in Madrid.

National, regional and local governments got together to discuss formulas for allocating the necessary resources “in the fairest and most balanced way possible”. The Basque environmental minister, Iñaki Arriola, opened the session with Secretary of State for the Environment Hugo Morán. Arriola reminded his audience that the fight against climate change is essential, but that its effectiveness depends on correct funding. “If we are certain of the need to act, technical solutions will appear along the way. The key lies in mobilising the will and the resources to be able to implement all the necessary actions”, said the Basque minister.

To tackle the question, national governments, the European Commission and also the closest regional and local administration met at an event which was attended by the Minister of the Environment, Climate Protection and the Energy Sector at the government of Baden-Württemberg, Franz Untersteller.

The new president of the European Commission, Ursula Von der Leyen, announced at the COP25 last week that a European directive will be passed in March to make climate neutrality in the EU irreversible and that it will be supported by an investment plan based on research, innovation and new technologies, which may reach a billion euros in ten years.

In this regard, Iñaki Arriola added that “States, international bodies and organised civil society must make big commitments to respond to climate change at summits like this one in Madrid. But everyone is aware of the crucial role of the regions, autonomous communities and sub-national governments when it comes to implementing the policies and measures committed to at these events.

It is in this regional and local area that “spaces, conditions and tools are created for other actor involved to advance and transform their activity toward decarbonisation of the economy”. Arriola added: “The Basque Region is a small piece of an enormous problem”. But it is working to finding solutions within its ability. He mentioned two examples of this.

Firstly, an issue of “Sustainable Bonds in the sum of 1,100 million euros for social and environmental projects linked to the Agenda 2030, which represents a tenth of our Annual Budget”. As well as declaring the Climate Emergency in the Basque Region in July, the Urban Klima 2050 project was presented as “the most important and ambitious climate action initiative for the Autonomous Community for the years to come”. This European Commission LIFE project led by its Environmental Department involves more than 20 Basque organisations which are taking action to adapt the territory to the effects of climate change.

Climate change will oblige the mobilisation of an enormous quantity of resources. The question is where these investments should be channelled, and how it should be done. “Energy, mobility, food, production methods, health and healthcare, housing and urban design, ecosystems... The climate emergency is forcing us to change course while modifying our cultural and consumption patterns at the same time”, explained the minister.

That’s why this is such an enormous challenge: “We must choose the right projects in strategic sectors; they must be managed and carried out efficiently and we must share the work and benefits fairly so that no countries, sectors or people are excluded from the ecological transformation and adaptation”, stressed Iñaki Arriola.

After the panel discussion with governments, in which the Minister for the Environment of Baden-Württemberg, Franz Untersteller, and the Commissioner for Climate Change at the European Commission, Yvon Slingenberg, participated, other social and private sector organisation representatives took the floor. Among them were senior investigator at BC3 and associate professor at the University of the Basque Country Mikel González-Eguino and representatives of the European Investment Bank, the Spanish Social and Responsible Investment Forum and Banco de España.