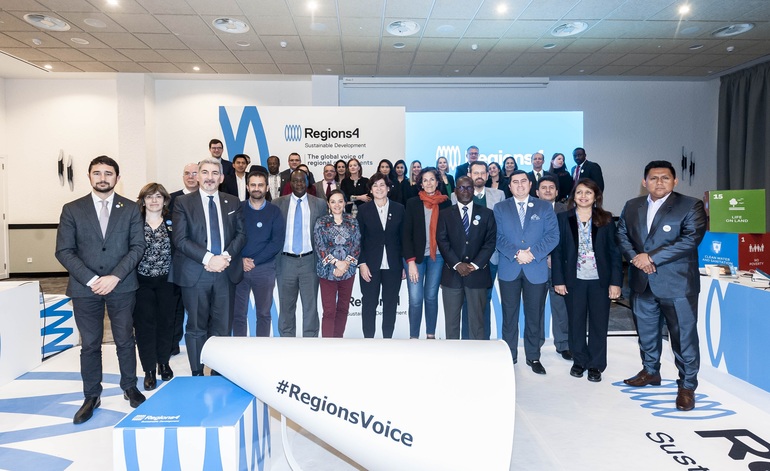 Coinciding with the Climate Summit-COP25 in Madrid, the network of regional governments for sustainable development, Regions4, held an extraordinary general assembly this morning, during which it approved its strategic plan for the coming years and stressed the crucial importance of regional governments when tackling the climate crisis.

The Basque Government’s Deputy Minister for the Environment, Elena Moreno, who is the Regions4 Chair for the North and chaired the Assembly, stressed that “the voice of the regions is fundamental when addressing this challenge. Regions4 is the only global networks of regional governments around the world that are working in cooperation from the perspective of sustainable development, with special focus on two areas: biodiversity and climate change adaptation,” Moreno explained.

Indeed, biodiversity is expected to be the central theme in 2020, mainly due to the Biodiversity Summit being held in Yunnan (China); an event that will set the global framework for action in biodiversity for the coming decade, the so-called post-2020 framework.

During today’s meeting, a new governance model was also approved for the Regions4 network, which envisaged a single chairship – there have been two chairships up to now, one for the North, held by the Basque Country, and another for the South, entrusted to the Ecuadorian region of Azuay – and four geographical deputy-chairships: in Europe, the Americas, Africa and Asia-Oceania. The regions to hold each of those new posts will be decided during the first quarter of 2020 and meanwhile the Basque Government will continue to hold the chairship of the network.

“Today’s Assembly has been the network’s first event since its change of name – from nrg4sd to Regions4 –and image in keeping with its proposed renewal and strengthening, with new member regions joining,” explained Deputy-Minister Moreno. “It is also a network that facilitates access for regions around the world, as the membership fee is calculated according to the number of inhabitants and per capita income of each territory, so that all the regions can join on an equal footing and none are left out,” continued Elena Moreno.

Regions4 brings together 40 regional governments from 21 countries on 4 continents. It is officially recognised before several United Nations entities and is accredited with the main international conferences and summits to enable its members to participate in those major international events, network and follow-up on global negotiations.

Session on water and nature-based solutions

In the afternoon, the Basque Government and Regions4 organised a special session to discuss regional leadership when addressing the challenge of water and nature-based solutions to adapt to climate change.