Elena Moreno: “In the Basque Country, we are establishing the legislative framework to achieve carbon neutrality by 2050 at the latest” 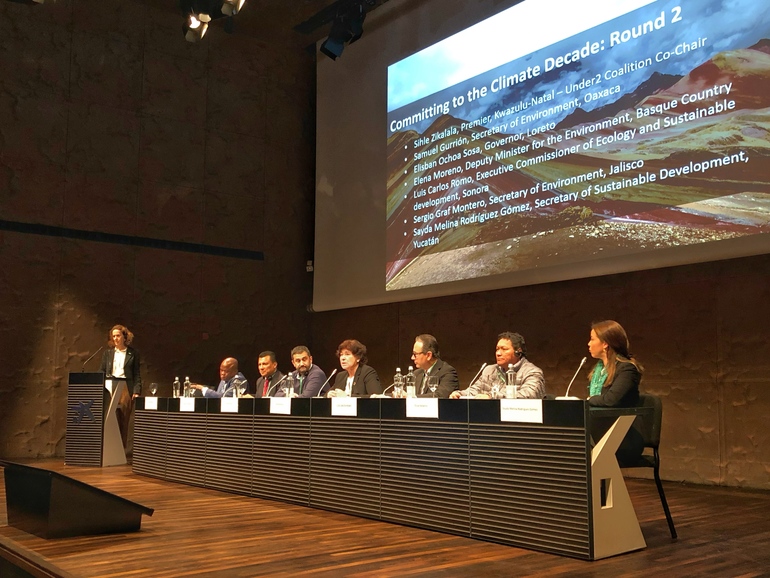 The Basque Government’s Deputy Minister for the Environment, Elena Moreno, today took part in the meeting of the Steering Committee of the Under2 Coalition, of which the Basque Country has been a member since the coalition was founded.  Moreno subsequently spoke at the General Assembly held during the Madrid Climate Summit-COP25. Speaking to nearly 200 representatives of regions and states from around the world, Moreno ratified the Basque Country’s commitment to tackling the climate crisis and declared that “we are immersed in a race to establish a legislative framework to set carbon neutral targets for 2050 or earlier”.

Deputy Minister Elena Moreno also referred to the Basque Government’s climate emergency declaration last July and she stressed that the Basque Country had been worked on its own climate change strategy – KLIMA2050 – since 2015, which was approved prior to the signing of the Paris Agreement. Moreno went on to point out that it establishes “the need to address this problem by working at local level and on the basis of private-public partnership, including the citizens”.

Furthermore, Moreno announced that external auditors of the UN IPCC panel of experts had been in the Basque Country the previous week to assess the Basque greenhouse gas emissions inventory, an audit that the Basque Country has undertaken voluntarily, as it is only mandatory for States. “It is a transparency exercise and we want the inventory to be a tool to allow us to monitor and to help us design our policies,” explained the Deputy Minister.

The Basque Country in the Climate Ambition Alliance

At the end of the Under2 Coalition General Assembly, Gonzalo Muñoz, the so-called Climate Champion of the COP25 – a figure that emerged at the Paris COP in 2016 to bring the civil society into the climate action debate –,announced that the Basque Country had been included as a region recognised in the Climate Ambition Alliance.

The alliance brings together the countries, regions and cities that are expanding their actions for 2020 and that are working toward achieving net-zero CO2 emissions by 2050 or earlier, in line with the Paris Agreement. The official announcement will take place next Wednesday, 11 December, during a special session convened by the Government of Chile at the COP25.

The Basque Country is thus joining the network of 65 countries, 10 regions, 102 cities, 93 companies and 12 investors that already belong to the Climate Ambition Alliance.

About the Under2 Coalition

The Under2 Coalition is a global community of state and regional governments committed to ambitious climate action in line with the Paris Agreement. It brings together more than 220 governments representing over 1.3 billion people and 43% of the global economy. Its members commit to keeping global temperature rises to under 2ºC and to increasing their efforts to reach 1.5ºC, along with achieving net-zero greenhouse emissions by 2050.

The Basque Country is one of the founding members of this coalition, which was set up in 2015 under the auspices of The Climate Group, and has been a member of its Steering Committee since then.