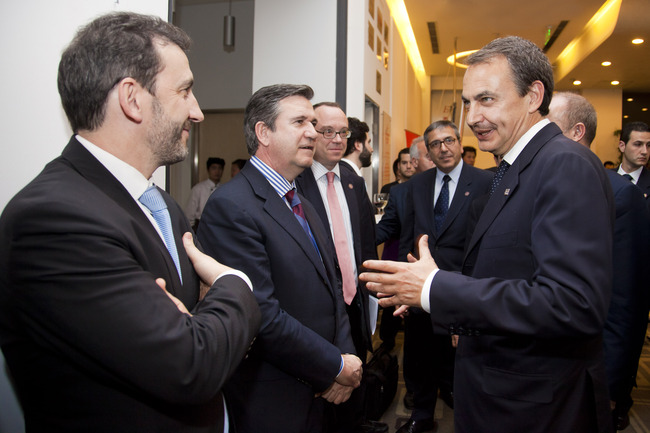 The Basque Minister has invited the director of the China Council for the promotion of International Trade to visit the Basque Country. This organisation grants permits to foreign companies to set up in China.

The Minister for Industry, Innovation, Trade and Tourism, Bernabé Unda, accompanied by machine tool and machine-tool component manufacturers, held a meeting with the Spanish President, José Luis Rodríguez Zapatero, in the Cervantes Institute in Beijing.

Here, the president offered a reception for a group of Spanish companies that are established in China.

During the meeting, Rodríguez Zapatero addressed the representatives of the AFM (Spanish Machine Tool Manufacturers' Association) and the AMT (Spanish Association of Manufactures of Accessories, Component Parts and Tools for Machine Tools), expressing his awareness of the importance of the sector and its potential at international level and in terms of exportation. The Spanish president also drew attention to the fact that the sector has gained considerable renown and prestige.

The manufacturers urged Rodríguez Zapatero to recognise Spain's need to strengthen industrialisation and competitiveness. To this end, modern machine tools are required, technology adapted to industry needs. Therefore, the sector has requested measures to be taken to search for formulae that enable companies to be reequipped with advanced production technologies.

More specifically, the manufacturers and Minister Unda petitioned for the application of a Machine Tool Renewal Plan at national level, emulating the plans implemented in the Basque Country in recent years. In this manner they spoke to the national Minister for Industry, Tourism and Trade, Miguel Sebastián. The plan was already mentioned in the budgets. The minister explained the difficulties entailed in implementing such a plan given that there is no specific budget item in this regard; however, he did confirm that if implementation proves impossible in the current financial year, it will be introduced in 2012.

During the meeting with the national minister, the Basque minister Bernabé Unda made reference to the Chinese Spanish Machine Tool Centre. He compared the centre to the Cervantes Institute, drawing attention to its capacity as a "showcase", for pupils and Chinese society. The Basque minister undertook to send further information on the project given the advisability of promoting this centre via the Basque and central administrations.

Today also saw the inauguration of the SPRI office in Beijing, an event that was attended by several Basque companies, such as Lantek, Arteche and iGeo.
A meeting also took place with Sui Jianmin, director of the China Council for the promotion of International Trade (CCPIT), the Chinese organisation that grants permits to foreign companies wishing to set up in China, which is also charged with organising trade shows and industrial development events.

During the meeting, the minister and the director exchanged information. Sui Jianmin stated that he had knowledge of the Basque Country. The minister invited him to visit the Basque Country to gain awareness of the potential of Basque companies, in person, along with the Basque SME network, as there are also opportunities for them to compete in China.

During the meeting they also discussed the willingness of the Chinese authorities to promote development in the north of the country, where renewable energy will be strongly promoted, particularly wind energy. Indeed, it is here that Gamesa intends to open two new plants this year.