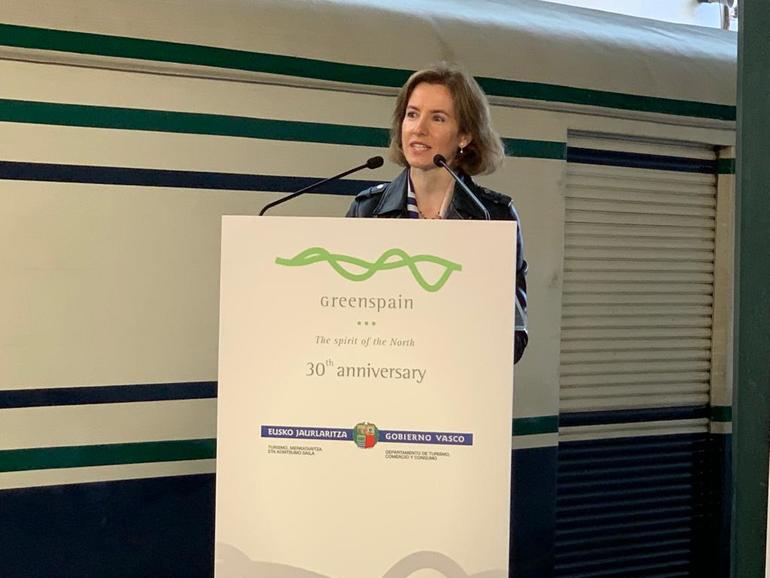 Today the Minister of Tourism, Commerce and Consumption, Sonia Pérez Ezquerra, has presented the event to celebrate the 30th anniversary of España Verde-Green Spain, a trip in the Costa Verde Express to promote the attraction of northern Spain’s regions.

With respect to these regions the Minister explained that “the tourist market is a global market in which the ‘Spain’ brand is consolidated and renowned worldwide. That's why we have to collaborate among ourselves through Green Spain and other initiatives to strengthen our position in this global market and achieve greater visibility, without losing sight of the singularity of each region”.

Therefore, at this celebration, journalists from different countries have been invited on a press trip to show them the experience of travelling across the north. They are from European countries such as Austria, Italy, Switzerland, Germany or France and others such as Australia, Argentina, Mexico, and the USA, with media representatives from Chicago, Los Angeles, Miami and New York.

The Minister has referred to the latest report by Exceltur on the third quarter of 2019, which points to “a rise in foreign tourism in urban destinations of España Verde as opposed to sun and beach destinations, particularly from long-distance destinations, which is why we consider it essential to continue working together on attracting these types of visitors”.

Anniversary Programme in the Basque Country

The Costa Verde Express journey started yesterday in Balmaseda and the plan today is to explore the transformation of Bilbao and the Guggenheim effect, a visit to the Old Quarter, a boat ride down the river (from the maritime Museum to Getxo) with a stop in Portugalete at the Vizcaya Bridge; from the industrial past to the cutting-edge present. Tomorrow it will head towards Cantabria to complete the trip on Friday in Galicia, after stopping in Asturias.

España Verde is the regional brand launched by Galicia, the Principality of Asturias, Cantabria and the Basque Country, with the aim of positioning the Cantabrian coast as an alternative tourist destination in the international market. Created in 1989 with the support of Turespaña, España Verde is facing its 30th anniversary with the goal of reinforcing its brand image and promoting itself as a unique destination, a national leader in nature tourism with 14 UNESCO Biosphere Reserves, 25 natural parks, almost 2000 kilometres of coast and 2800 rural retreats. The St James's Way paths and the quality of its gastronomy are some of the resources that define España Verde as an outstanding destination.

The Basque Country received the coordination of the España Verde brand early this year from Asturias, at the FITUR Fair. During 2019 new shared projects have been launched, featuring among them activities on social networks, familiarisation trips with journalists such as the one presented today, live sessions and a joint participation at the World Travel Market in London, where the “Art, Fashion & Design Green Spain” product will be presented to showcase its commitment to sustainability and local products.