Promotion of the Atlantic Rail Corridor 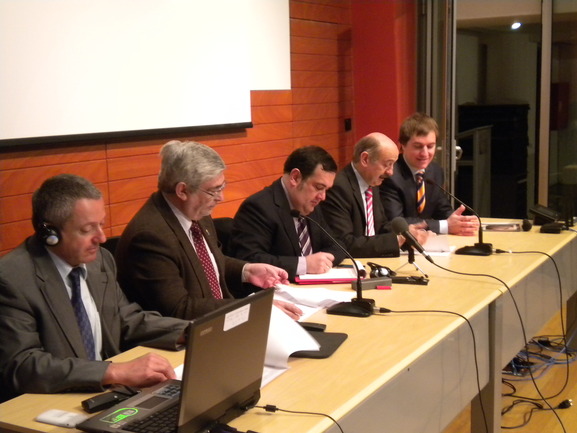 In Brussels, the Basque Government has obtained support from the Ministry for Development and France for the Atlantic Rail Corridor

In Brussels, the Basque Government obtained the support of the Ministry for Development, represented by two of its directors, and the French executive in order to definitively promote the Atlantic Rail Corridor. This afternoon, the Basque Vice-Minister for Transport, Ernesto Gasco, accompanied by José María Mazón, the Cantabrian Government's Minister for Infrastructures, Bernard Uthurry, the Aquitaine Vice-President for Infrastructures, Patrick Anvroin, Director General of CPMR, and members of the European Parliament signed a Manifesto in Brussels demanding recognition for the Atlantic Rail Corridor as a priority goods axis within the European Union.

The day commenced with a seminar on the transcendence of the Atlantic Rail Corridor as an opportunity for this geographical region. The various institutions involved and companies wishing to participate shared their views and discussed the challenges to be faced by the goods and transport sector, drawing attention to the importance of multimodality, sustainable transport, green corridors, the commitment to maritime motorways and the integration of ports into the inter-modal goods transport system.
In this regard, Vice-Minister Gasco, in the inaugural speech of the seminar, drew attention to the "vital nature" of the support afforded to this axis by the Ministry for Development, in view of its sustainability and the importance of strengthening goods transport via rail, as outlined in the national goods plan unanimously passed by the Ministry and all autonomous regions no more than 5 months ago.

Thus, he stressed that as High Speed Rail advances, it will enable us to consider new challenges entailed in using conventional tracks with the corresponding improvements in infrastructures, enabling goods to use the lines once used by passengers, thereby promoting the change of the rail gauge width, which for many years has isolated Spain from the rest of Europe. The French Adif has also begun to work towards this end.

The governments of the north of Spain, the Vice-Minister stated, have shown their commitment to a modern logistics model and the development of the goods trade, which will attract companies and facilitate the creation of jobs. Therefore, Atlantic Europe "must become" a communication nexus, not only via rail, but also via ports. Over the course of the last three months, since the presentation of the project, efforts have enabled significant advances to be made. Echoing the words of Minister Arriola, Gasco wished to stress the importance of ensuring public/private participation; the involvement of the economic sectors linked to commercial activities and transport.

The result has been a joint approach, a project involving chambers of commerce, social agents, companies and institutions. Actions of this nature have already obtained excellent results in the regions and countries of the Mediterranean. The Atlantic Rail Corridor runs for 2000 km, passing through European states and regions with a collective population of 65 million inhabitants. Moreover, it interconnects thirteen ports on the Atlantic coast, between Holland and Portugal, thereby increasing the business possibilities of the ports and linking the various logistic centres within their sphere of influence. However, it also entails developing a strategic sustainable transport axis that will impact the environment to considerably lesser degree.

The contribution of approximately 2 billion euros to the European Union's GDP made by the regions making up Atlantic Europe over the course of 2007 gives us an idea of the economic magnitude and importance that this geo-strategic zone in Western Europe now boasts.
The setting up of a network of agents for the promotion of Atlantic Europe will also entail placing this strategic axis at the level of the main axes of Central Europe and the Mediterranean, whilst facilitating traffic to and connections with Northern Europe, the United Kingdom and Morocco.