Bernabé Unda presides over the Management Board of the AFM and visits a Gamesa plant in Tianjin, China 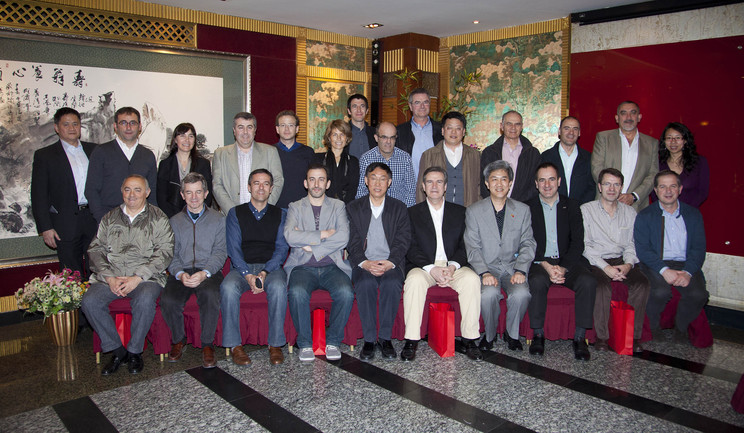 Bernabé Unda has travelled to China in order to follow up the business mission that took place last October. Tomorrow, the minister will visit Beijing in order to attend the CIMT trade show, focusing on machine tools, and the inauguration of the Danobat Group China offices. Unda will hold meetings with the China Council for the promotion of International Trade and representatives of the Basque companies in Beijing. The minister will end the week in the region of Jiangsu, where he plans to hold meetings with the vice governor of the province, the mayor of Qiandeng and the mayor of Kunshan. During his visit, the minister will be accompanied by Basque businessmen and women such as José María Aldecoa (Mondragón) and the directors of the machine tool cluster (AFM) and Gamesa.

Today, Bernabé Unda, Basque Minister for Industry, Innovation, Trade and Tourism commences his visit to China to follow up the business mission headed by the Lehendakari, Patxi López, last October and to support various initiatives of the Basque companies established in this Asian country.

The minister will be accompanied by a number of Basque businessmen and women, such as José María Aldecoa, president of Mondragón Corporation, Koldo Arandia and Xabier Ortueta, president and general director of the AFM (Spanish Machine Tool Manufacturers' Association), respectively, and Gamesa directors.

On Monday, Bernabé Unda visited the Chinese Spanish Machine Tool Centre in Tianjin (CSMC). The centre is located in a Chinese pilot campus, focusing on the reform of the entire educational system, including professional training and university level courses. This institute represents a platform via which to showcase the technological image of the Basque Country, whilst also serving as a stage for small and medium size enterprises wishing to reach the Chinese authorities.

China, 45% of the global market

Whilst at the institute, the minister presided over the Management Board of the AFM. The board was attended by representatives of Ibarmia, such as AFM president, Koldo Arandia, Arisa, Danobat, Goratu, M. Torres, Autopulit, Fagor Automation, Nicolás Correa, Kondia, Zayer, Lizuan, Loire and Nacho Artamendi, general director of the Chinese Spanish Machine Tool Centre.

The objective of the meeting was to increase the presence of the companies represented by the AFM in the Chinese market. It must be borne in mind that China represents 45% of global machine tool consumption.

Furthermore, the AFM cluster participates in three other clusters within the "Inciativas Compite" program, set in motion by the Basque Government.

Unda, again accompanied by AFM representatives, visited one of the four Gamesa production plants in Tianjin, a city of 12 million inhabitants that represents a preferential development area. This meeting proved interesting as it involves contact between two sectors: the wind energy and machine tool sectors, thereby facilitating the generation of synergies.

Gamesa boasts 1200 employees in China. To date, 42 million has been invested in this country and Gamesa hopes to continue with its commitment with a further 90 million between this year and the next. The Basque company has installed 256 MW in Chinese wind farms and has signed agreements to install a further 600 MW.

The minister, accompanied by the Vice-Minister for the Cabinet, Planning and Strategy, Pedro Gómez Damborenea, also held an interview with the general secretary of the local CCP and the director of the educational complex in Tianjin, which is of an extraordinary size.

Tomorrow, he will attend the China International Machine Tool Show, which commences today in Beijing. The CIMT is one of the largest and most influential machine tool events in the world. The minister will also visit the Chinese factory Beijing Number 1 and the offices of Danobat Group China.

On Wednesday, Bernabé Unda will continue with a meeting with the China Council for the promotion of International Trade (CCPIT). Later, he will visit the SPRI office in Beijing to hold a meeting with representatives of several Basque companies.

The minister's visit will then turn to the Jiangsu region, more specifically, the city of Nanking. Here, on Thursday, he plans to hold a meeting with the Vice Governor of the Province of Jiangsu, a territory that signed a collaboration protocol with the Basque Government in October.

On Friday, Bernabé Unda's visit will draw to a conclusion in the Mondragón Industrial Park in Qiandeng. Here, institutional meetings will continue as there are plans to hold interviews with the mayor of this municipality and the mayor of Kunshan, a city that lies close to the Industrial Park of the Basque group.

Last October, the minister accompanied the Lehendakari in the business mission to China, the first of its kind to be spearheaded by the Basque Government. This trip involved the participation of 70 Basque companies from various sectors.
Vitoria-Gasteiz, 11th of April 2011