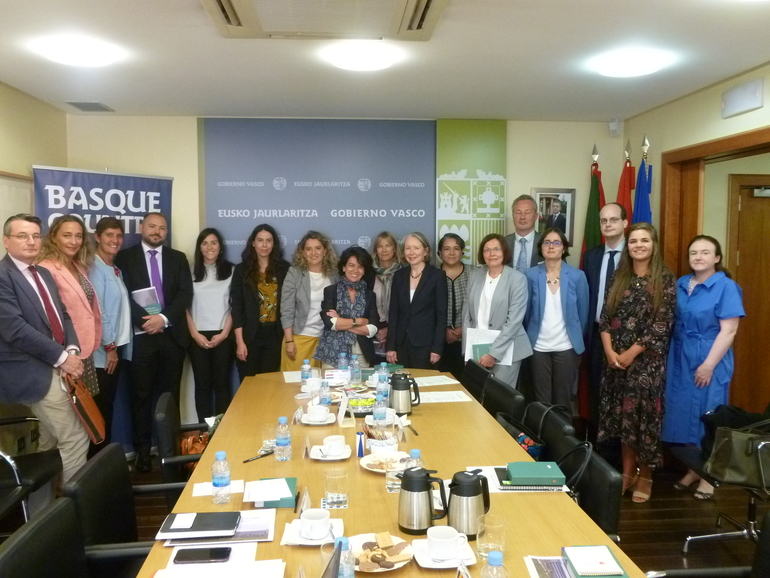 This morning, representatives of the Basque Government’s Ministry for the Treasury and Economy and its Ministry for External Action held a work meeting in Madrid with embassy representatives from 18 countries to showcase “THE ECONOMIC AGREEMENT BETWEEN THE BASQUE COUNTRY AND THE SPANISH STATE”

The work meeting, entitled “THE ECONOMIC AGREEMENT BETWEEN THE BASQUE COUNTRY AND THE SPANISH STATE: what the Basque Economic Agreement is and how it governs the financial and tax relations  between the Basque Country and Spain”, was the opportunity to explain to the members of the diplomatic corps that historically, and as an essential part of the Basque charter system, the Agreement has been the cornerstone of the relations between the Spanish State and the Basque Country. That the Basque Economic Agreement governs the unique financial and tax relations between the Spanish State and the Basque Country.  It is based on the first additional provision of the Spanish Constitution, which safeguards and respect the historical rights of the charter territories (Araba-Álava, Gipuzkoa and Bizkaia), by requiring the general updating of the self-governing regime, and in Title III of the Basque Statute of Autonomy, which recognises the regulatory capacity of the competent institutions of the provinces of the Basque Country, by affirming that they will be able to maintain, establish and govern their own tax system within their province.

Furthermore, the Basque Economic Agreement, is characterised by:

Arrangement system: this is one of its essential features, arising from the consideration of the different authorities that, in the exercising of their respective powers, agree certain relationship rules, in this case in the financial and tax areas. The Economic Agreements are, therefore, legislation passed as the result of an agreement, in the same way as their amendment and adaptation laws, and the five-year quota laws.

Tax management autonomy: the tax management and levying procedure, in all its phases, held by the Provincial Councils, is not the outcome of an assignment, but rather their own power exercised, as appropriate, in cooperation with other tax authorities.

Unilateral risk: the results, whether good or bad, arising from the management of the Agreement, go only to the Basque Country. In the same way that the State does not participate in the revenue raised by the Provincial Councils, it does not assume covering the public expenses of the Autonomous Community. On the other hand, the contribution to the State, the Quota or Cupo, is not calculated according to the revenue raised in the Basque Country and depends on exogenous variables, such as the expenditure on deployed powers not assumed in the Spanish Budget.

Today’s event is part of the regular calendar of meetings that Basque Government representatives and representatives of the diplomatic corps have been holding in Madrid in order to showcase the government’s plans and strategic initiatives for this parliamentary term.