577 innovative start-ups from around the world, 10% up on the previous years, have entered for the IV BIND 4.0 accelerator 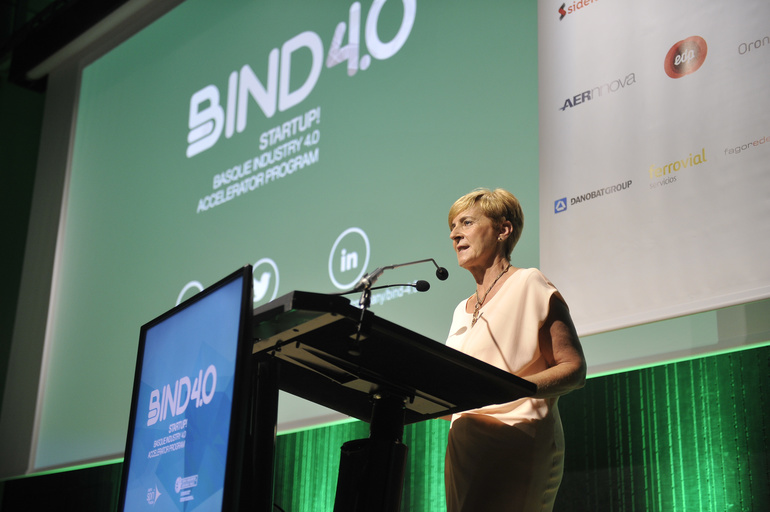 BIND 4.0, the smart industry private-public start-up accelerator, has closed the registration period for its fourth call with a total of 577 projects registered, which is 10% more entries on the previous year. The number has grown steadily, rising from 257 in 2016, to 385 in 2017 and to 524 last year. The number of participating countries has also increased, up from 64 countries in the 3rd call to 78 in the latest. This increase is, mainly, due to the entries from start-ups from the main technological hubs worldwide, including the United States, Germany, France, Holland, Israel and the United Kingdom, internationally, and Madrid, Barcelona and Valencia in Spain.

This initiative is supported by the Basque Ministry of Economic Development and Infrastructure through the SPRI Group, the Basque Government’s business development agency.  SPRI is leading the ecosystem of entrepreneurship in the Basque Country through its UpEuskadi platform.

As regards the origin of the entries received, 70 of them are from the Basque Country (39 from Bizkaia, 18 from Gipuzkoa and 13 from Araba), maintaining the interest generated last year, when 69 entries were received from Basque start-ups. A total of 81 companies come from the Spanish State, which is a significant increase of 42% up on last year. On the other hand, this fourth call has seen an increase in the interest by international start-ups, as 426 entries have been received, compared to the 398 proposals submitted last year.

Particularly noteworthy among the international entries is the appearance for the first time of ones from China, Japan and Singapore and the rise, with respect to other years, of the start-ups from the United Kingdom (17), the USA (17), Israel (5), Germany (21) and Estonia (5).  However, the European presence is still greater, with a total of 293 emerging companies entered compared to the other continents. In turn, South Asia is represented by 90 entries, followed by the 61 from South America, 50 from North America, 14 from West Asia, 60 from Africa and, finally, 9 from South-East Asian.

This increase in international entries highlights how the BIND 4.0 Basque acceleration programme continues to consolidate its position as one of the main smart industry innovation and entrepreneurship benchmarks worldwide. BIND 4.0 has 52 major partner companies which will develop, along with the selected start-ups, the most innovative projects of the sector. Coca Cola, Eroski, Grupo Uvesco, Unilever, Angulas Aguinaga, EDP, Avia and Ferrovial are among the latest companies to sign up to the programme for its fourth edition.  This is undoubtedly a great lure for the companies and entrepreneurs that will take part this year.

All the start-ups entered in this fourth edition have submitted high-quality cutting-edge solutions, in order to improve processes, services and products. These involve applying such innovative technologies as collaborative robotics, the Internet of Things, artificial intelligence, Big Data, cybersecurity, augmented and virtual reality, interior positioning systems, artificial vision or drones.

It should be noted that 60% of the participating start-ups have submitted a solution with potential application, among others, to advanced manufacturing. Followed, in second place, by technologies with possible application to the health sector, and accounting for 36%; and in third place, 31% of the projects apply to the food sector and a further 31% can be used in the energy segment.

The IV BIND 4.0 offers many new features. On the one hand, the number of trailblazing companies has risen from 40 to 52. Leading firms, including Ferrovial, EDP, AVIA, SNA Europe and Saralle, have joined companies of the ilk of Mercedes-Benz, Arcelor, ABB, Iberdrola, Michelin, ITP Aero, CAF, BTI, Quirón and Siemens Gamesa.

The second new feature this year is the food sector, which has been included in the acceleration programme this year. Thus, the growing “Food-Tech” sector has been added to the areas already included in previous years, such as advanced manufacturing, energy and health. Furthermore, this year, Coca Cola, Unilever, Eroski, Grupo Uvesco, Angulas Aguinaga, Natra and Okin, have also joined as trailblazing companies in this area.

Finally, BIND 4.0 has set up a Venture Club. It is a club of investors in line with the specialisation of the accelerator and its goal is to strengthen the support services of the accelerator and foster contact between the participating start-ups and specialised investment entities, by driving the development of new funding opportunities to accelerate the development of the new companies.