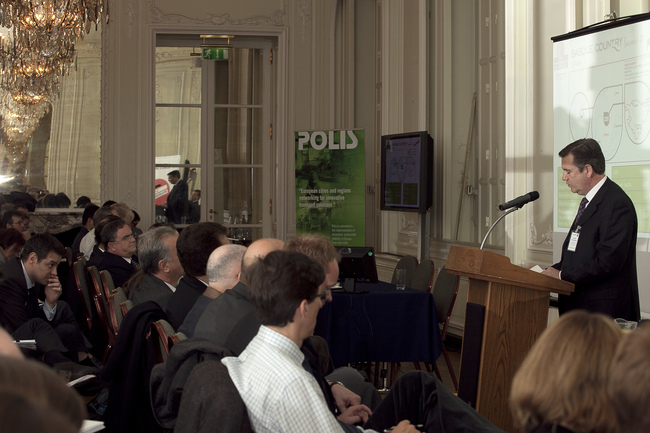 Unda was invited by The Climate Group to attend the second meeting of EV20, a group of 20 national and regional governments and the companies most active in the development of electric vehicles

The Electric Vehicle 20 (EV20), a group of 20 national and regional governments and the companies most active in the development of electric vehicles, asked the Basque Country to talk about its experiences in this area, in recognition of its successes. During a conference that took place in London this morning, the Minister for Industry, Innovation, Trade and Tourism, Bernabé Unda, highlighted the role of "public-private partnerships" in the two initiatives set up to promote the development of electric vehicles and intelligent networks.

"Both initiatives have been developed in accordance with the same formula: the creation of holding companies in which the Basque Government participates along with benchmark private companies in the energy sector", explained the minister. "The objective of these companies is to invest in, operate and manage initiatives that equip the facilities in question (charging points for electric vehicles, in the case of the first company, and electricity networks in the case of the second) with intelligent and energy-efficient systems. This shareholder configuration gives these companies the status of public-private partnerships, which makes a major contribution to reducing their risks and uncertainties in an emerging market in which neither the regulatory framework nor business models throughout the value chain are fully consolidated", he added.

The London event was organised by The Climate Group and Polis, a network of European cities and regions that promotes innovation in local transport, and took place at the headquarters of the SMMT (Society of Motor Manufacturers & Traders) in Forbes House. Bernabé Unda participated in the inaugural session, where he gave a talk entitled "Constructing a Framework for Adequate Policies: The Future Prospects for Electro-mobility in European Cities and Regions". He was joined in the session by officials from Rotterdam and Sao Paulo, who also spoke about their respective experiences.

The event took place under the banner of "Electric Vehicles: A Solution to Sustainable Local Mobility" and focused on three fundamental issues: the efforts made to speed up the progress of electro-mobility by city authorities and regional governments; the promotion of fleets of electric vehicles at a commercial level by governments; and the current strategies being championed by a number of different governments.

The minister explained that "the energy priority of the Basque Country, in light of the scarcity of natural energy resources, is to reduce consumption through saving energy and improving energy efficiency. The challenge for the Basque Country in the coming years will be to extend the significant efforts made by the industrial sector to become more energy-efficient to other sectors and activities; in particular, to the energy consumption of buildings and transport". To help achieve this, so-called "smart technologies" represent major potential energy savings. The main obstacle to their rapid expansion is the creation of a regulatory framework and standards that will promote their implementation, as well as finding adequate funding to cover the necessary investments.

Unda's talk revolved around the two key issues of regulation and funding, regarding which he stated that "regulation and funding are two sides of the same coin: only an adequate regulatory framework, one that includes corresponding guidelines for pricing and profits, will lead to the development of efficient funding mechanisms that can meet objectives; and only funding that shares the risks involved in developing pioneering projects in these areas will be able to help regulators find the most appropriate formulae for promoting and enabling large-scale implementation".

He went on to explain the way in which the Basque Government has implemented innovative policies and public-private partnership initiatives over the last two years to overcome the regulatory and financial barriers to the implementation of smart technologies. Two specific examples of these efforts are the development of the electric car and intelligent networks: the former with the creation of IBIL, a company set up to establish a network of charge points for electric vehicles throughout the Basque Country and in which the Basque Energy Agency (EVE) and Repsol hold 50% of the shares, and the latter via the creation of another holding company pertaining to EVE and Iberdrola for the purposes of investing in projects in Bilbao and Portugalete.

Hormaeche participates in a roundtable session

During the afternoon, Bernabé Unda was joined by EVE Director José Ignacio Hormaeche for the final roundtable session. The session provided a forum in which to discuss the different experiences of European cities and regions, and Hormaeche took the opportunity to talk about EVE's initiatives regarding electric vehicles.

The EV20 is made up of national and regional governments and companies that are currently leading the field in the implementation of electric vehicles. Members of the group include Christian Estrosi, the French Minister for Industry; Pierre Arcand, the Minister of Sustainable Development, Environment and Parks in Quebec; Pete Grannis, the Commissioner of the New York State Department of Environmental Conservation; Jean-Paul Huchon, the President of the Paris metropolitan area and administrative division Île-de-France; Shai Agassi, the founder of the Israeli company Better Place, which is a leader in research on batteries for electric cars; Hideaki Watanabe, the head of electric-vehicle development at Renault-Nissan; and Philippe Varin, a senior executive at PSA Peugeot Citroën, in addition to representatives of other companies such as Arup, Ener1, Johnson Controls, TNT and Venturi Automobiles and the governments of Amsterdam, London, North Rhine-Westphalia, Queensland and South Australia. The group is headed by Prince Albert of Monaco.

The aim of the EV20 group is to speed up the global implementation of electric vehicles, and the Basque Government was invited to be a founder member of the group in New York last year. Over the course of the next few years, the first threshold date for the transformation of the automotive market will be established in 2020, with a specific focus on fleets, as well as funding mechanisms and public policies that will support these more sustainable modes of transport.

Meeting with The Climate Group

The minister's agenda for today included a request for a face-to-face meeting from Mark Kenber, the CEO of The Climate Group. During the meeting, Unda and Kenber planned the development of future activities and shared success stories regarding the implementation of electric vehicles.