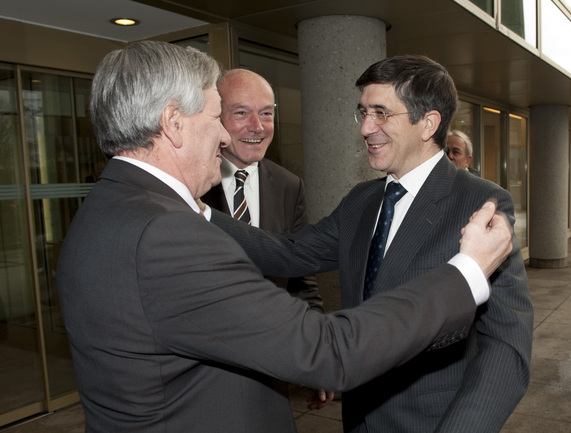 The Lehendakari, Patxi Lopez, co-chaired a summit held in Bordeaux between both regions to sign an agreement that will aim to set up a new Euro-region within six months.

The Basque Country and Aquitaine have agreed to take the necessary steps to set up a Euro-region and in this way have a greater say in the European Union. This was the main agreement reached at a summit held in Bordeaux between both regions in order to increase their level of cooperation and to create a space for relations, exchanges and influence of special significance in Europe.

The Lehendakari, Patxi Lopez, has described the agreement reached between both communities to initiate the process in order to convert the Basque Country and Aquitaine into a Euro-region within the European Union as a "milestone" for both regions. At a joint press conference held with the President of Aquitaine, Alain Rousset, the Lehendakari declared that "We have taken a great step forward both qualitatively and quantitatively to intensify the policies of both governments". Lopez considers that this agreement will give both regions "greater weight" within the Union in order to "speed up the progress being made" in the economic and social development of the Basque Country and Aquitaine.

The Lehendakari stated that "within the next six months" work will be done to define "the contents of this Euro-region in order to make it as effective as possible" and decisions will be taken on such matters as its headquarters and internal structure. Lopez went on to emphasise that "This is a priority for the Foreign Action policy of this Government". One of the first subjects to be dealt with within this Euro-region will be the connection between the "Basque Y" railway system and the high-speed French railway. Lopez called for "the need to speed up negotiations to guarantee" this cross-border connection. "It is much more than a link between the Basque Country and Aquitaine, it is an intercontinental bridge to unite Europe and the Iberian Peninsula", he emphasised.

According to Lopez, the agreement sets out to improve cross-border collaboration in infrastructures, food, agriculture, education and vocational training as well as in business investment. Renewable energies and aeronautics, in which both communities "are major players", will play an important role in a collaboration which will make both regions a reference model". The Lehendakari emphasised that this agreement will enable both regions to strengthen their "cultural links" as it will allow them promote and use the Basque language "freely" in both communities.

The Lehendakari expressed his "great desire" to extend the internal changes that the Basque Country is undergoing at this time "across the border" to include relations at a foreign level with the Aquitaine government.