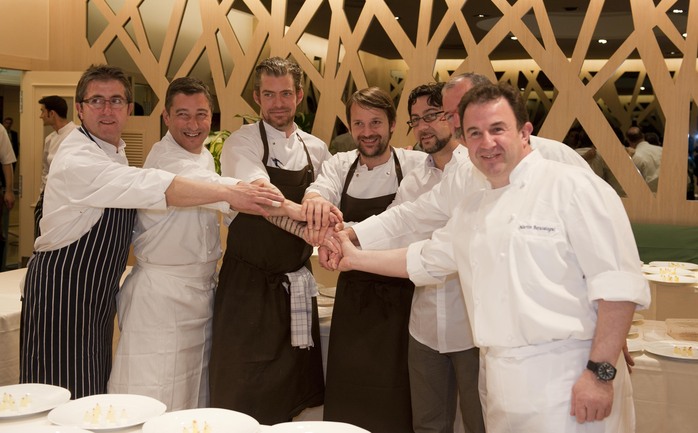 The Lehendakari awarded the "Silver Chef's Hat" to Danish chef René Redzepi, considered to be the best chef in the world, at the 17th National Congress of Gastronomy held in Vitoria-Gasteiz

Joan Roca, Martín Berasategi, Pedro Subijana, Quique Dacosta and Patxi Oteiza were among the "14 stars" invited by the Dane René Redzepi, the best chef in the world, to an unprecedented dinner in the kitchen of the Zaldiaran restaurant in Vitoria-Gasteiz. The Lehendakari, Patxi López, presided over the meal, which was organised to celebrate this year's 17th National Congress of Gastronomy and the 6th Young Chefs' Championship of Spain, which also took place in Vitoria. At the end of the meal the Lehendakari handed Redzepi the "Silver Chef's Hat" in recognition of his status as the best chef in the world. The Dane is head chef at the Noma restaurant in Copenhagen.

The Lehendakari hailed the congress as a "universal showcase" to present Vitoria-Gasteiz to the world, adding that the cuisine of the Basque Country is one of the region's best calling-cards. He went on to affirm that if the Basque Country wants to achieve success on an international level, it must apply "the paradigm of the Basque chefs to all areas of its activity: nurture your own products, learn from tradition, innovate, study and integrate contributions from elsewhere and, as a result of all the above, achieve a superlative level of quality that can go beyond our borders and become an international benchmark".

During his speech, the Lehendakari encouraged the sharing of the experiences and successes of Basque cuisine, and of congresses such as that celebrated in the Zaldiaran restaurant, with "the young people who are studying today and training to become chefs, with the young businesspeople who already run their own businesses and with the veteran chefs responsible for the fact that, when someone from abroad thinks about the Basque Country, their tastebuds are the first thing to be stimulated".

The Lehendakari, Patxi López, was joined at the dinner by Pilar Unzalu, the Minister for the Environment, Territorial Planning, Agriculture and Fisheries; Xabier Agirre, the Deputy General for Álava; and Juan Carlos Alonso, the Deputy Mayor of Vitoria-Gasteiz. Also present at the top table were a large number of food experts from the media, such as Fernando Rubiato, the Editor-in-Chief of the Michelin Guides to Spain and Portugal; Rafael García Santos, the renowned food critic; Rafael Ansón, the International President of the Academy of Gastronomy; Pepa Hernández, a journalist at Spanish National Radio (RNE) and winner of the 2010 Premio Ondas award for broadcasting; and José Ribagorda, a journalist at the Telecinco television station.