52 leading Basque companies to work with start-ups from around the world in the IV BIND 4.0 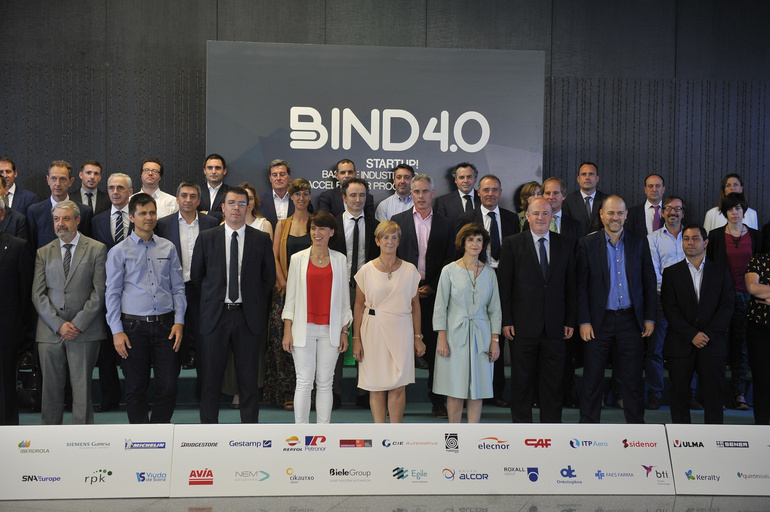 The IV BIND 4.0 offers many new features. On the one hand, the number of trailblazing companies has risen from 40 to 52. Leading firms established in the Basque Country including Ferrovial, EDP, AVIA, SNA Europe and Saralle, have joined companies of the ilk of Mercedes-Benz, Arcelor, ABB, Iberdrola, Michelin, ITP Aero, CAF, BTI, Quirón and Siemens Gamesa.

The second new feature is the food sector being included in the new call. Thus, the thriving “Foodtech” sector joins the areas already in the three previous BIND 4.0: Advanced Manufacturing, Energy and Health. In that regard, Coca Cola, Unilever, Eroski, Grupo Uvesco, Angulas Aguinaga, Natra and Okin are the companies based in the Basque Country that will be trailblazers in this area this year and which will seek to give impetus to their digital transformation by means of working with start-ups.

Finally, the setting up of the Bind 4.0 Venture Club has been announced.  It is a club of investors in line with the specialisation of the accelerator and its goal is to strengthen the support services of the accelerator and foster contact between the participating start-ups and specialised investment entities, by driving the development of new funding opportunities to accelerate the development of the new companies.

Taking stock of the third edition.

The III BIND 4.0 strengthened its position as a benchmark in this type of initiatives. On the one hand, it increased its main figures, both in terms of the number of participating start-ups – which rose from 27 to 33 -, and of projects implemented – 44 in the last edition, compared to 40 in the second and 16 in the first. On the other hand, the projects submitted to access the programme increased from 385 in 2018 to 524 in 2019, 75% of which were from 64 countries on four continents. The trailblazers also increased significantly, to 40 in the third edition from 27 in the second.

A total of 69 Basque start-ups submitted entries for the III BIND 4.0. However, there were a further 150 from different European Countries, 65 from North and South America, 216 from Asia, 22 from Africa and 2 from Oceania.

The BIND 4.0 DemoDay held today in Bilbao was attended by Minister Arantxa Tapia and different members of her Department, along with the participating start-ups and trailblazing companies, investors and technology stakeholders.

BIND 4.0 is the result of the commitment in the Basque Country to implement the Fourth Industrial Revolution, characterised by the digitalisation of factories, in the framework of the global competition to attract talent and the best start-ups. This goal has brought together public stakeholders of the BAC (Basque Government, SPRI Group, Provincial Council and the BIC innovation and company centres of Araba, Bizkaia and Gipuzkoa) and 40 of the leading private business corporations with headquarters in the Basque Country, in addition to cutting-edge international companies such as Siemens, Microsoft and Amazon Web Services, which are participating as technology partners.

The interest of the leading Basque companies in start-ups capable of providing new technological solutions is complemented with the support BIND 4.0 provides in terms of invoicing, access to the market through prestigious customers, along with funding and/or investment opportunities in the initial phase of their development. Two objectives are thus combined: acceleration of emerging business projects and impetus for the digital transformation of consolidated companies