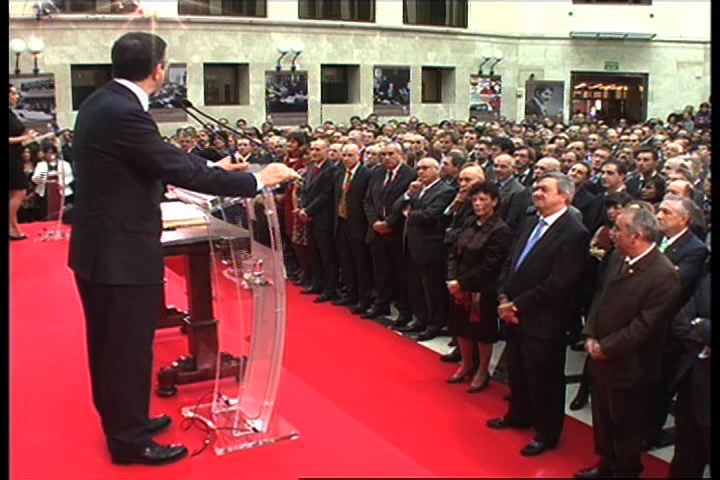 Basque regional president Patxi López said yesterday that, thirty years on, the Basque Home Rule Act (better known locally as the Statute of Guernica) was in remarkably good shape, as it was still the guarantee of the Basques' "right to decide" and the "frame for the peaceful coexistence" giving the region "freedom, democracy and home rule." López described the Act's anniversary as the best possible day to confirm the value of the Statute as the frame for democratic coexistence in the region, because it defined the Basque Country in inclusive terms, excluding no-one, while respecting the diversity of ideas and identities in Basque society, "free of discrimination or fictional divisions."

Accompanied by his regional ministers in the Basque Government, López celebrated the 30th anniversary of the regional home-rule act with a reception at Ajuria Enea, the president's official residence. Attending the reception were a hundred or so local personalities and representatives from the region's institutions, political parties and major social and economic players. Amongst their number were Spanish Senate Speaker Javier Rojo, Basque regional Parliament speaker Arantza Quiroga, central government delegate in the Basque Country Mikel Cabieces, the president of the Basque Higher Court of Justice, Fernando Ruiz Piñeiro, regional Ombudsman Iñigo Lamarca and Antonio Basagoiti, president of the Basque branch of the Spanish conservative party PP, Josu Jon Imaz, ex-head honcho of Basque nationalist party PNV and currently chairman of Petronor and Mario Fernández, recently appointed chairman of regional savings bank BBK.

In his speech at the event, the regional president stressed the virtues and benefits the Guernica Home Rule Act had entailed for the Basques. "Thirty years ago", he said, "the Basques achieved an ambition long held by democrats during the long dark night of the Franco regime. We struggled for freedom, democracy and home rule; and we achieved these complementary goals together because for us they are embodied in the Statute of Guernica." López also called on Basque society as a whole to keep faith in the Home Rule Act as a "means toward understanding coexistence between large numbers of people with equal rights."

To end, López defended the validity of the "Basque Day" celebrated on 25 October. It was a motive for celebration of an act providing the frame for coexistence in democracy, because it defined a Basque region where there was "room for everyone." But the regional president also said that he wasn't advocating a backs-to-the-wall defence of a particular Act. "There are no sacred scriptures in politics," he added. "What I want to defend is this particular means of understanding coexistence between a huge variety of people all with equal rights."

A word for the victims of terrorism

Before an attentive audience, López had a word for a group of Basques who were in no position to celebrate the anniversary of the Statute of Guernica: the victims of terrorism murdered by ETA. "I'd like this to be a day for a democratic rendezvous between Basques, a day on which we capitalize what we have built together over the last 30 years," he said, before adding that it was also a "day of remembrance, when we need to be mindful of the victims of terrorist violence." These people had been assassinated for defending the democratic values contained in the Home Rule Act. López made clear his ambition to achieve peace and the definitive defeat of ETA, and that "sooner rather than later." He looked forward to a day when no Basques were threatened with violence and death because of their political opinions and could choose their future and their own identity without having to pay a price for it. This was something, according to the regional president, that entailed a defence of the Act to "de-legitimize terrorism and extend consensus to ensure society can continue to progress" towards a scenario of "more rights and freedoms."