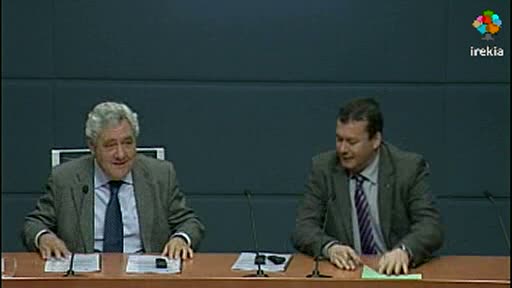 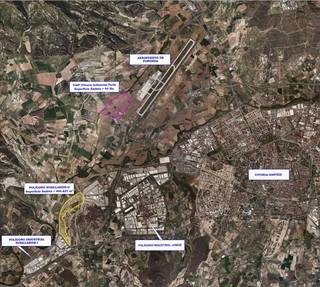 The initiative will complement the VIAP, the planned aeronautics park in Foronda, which was officially presented last week.

The new park will provide a further 450,000 m2 for economic activities and will support the industrial activities carried out in the major logistics hub to be created in the Basque Country (Intermodal-VIAP-Subillabide).

The agreement, which was signed today, will further help the development of the international transport hub that will be created in the north of Spain.

It is estimated that 26 million euros will be invested in the Subillabide II project, with construction work expected to finish in 2016.

Vitoria-Gasteiz, March 28, 2011. Another industrial-development project has been set in motion in Álava: last week, an agreement was signed to develop the Vitoria Industrial Air Park (VIAP) in Foronda, while today another agreement was signed to develop an industrial park in the area. The park, which will be located close to Subillabide II, will make available an area of 460,827 46 m² for economic activities.

The Mayor of Iruña de Oca, Javier Martínez, and the CEO of SPRILUR, S.A., José Manuel Iturrate, today signed a new agreement for collaboration in urban planning to officially launch the project, in which an estimated 26 million euros will be invested.The aim of the agreement is to formalise the interest of the institutions involved, namely the Ministry of Industry, Innovation, Trade and Tourism (through SPRILUR, S.A.) and Iruña de Oca Town Council, in order to develop a new facility for industrial use close to the VIAP and the future intermodal hub in Jundiz. The new industrial infrastructure will help strengthen synergies and reactivate the economy by attracting and generating new activities linked to the aeronautics sector and the transportation of food products by air.

Subillabide will become part of the project linking Vitoria-Gasteiz Airport, the intermodal hub in Jundiz and the VIAP to create the largest logistics-rail hub in the north of Spain.

Moreover, the agreement forms part of the framework of strategic activities planned for the Europe 2020 Competitiveness and Strategy Plan, which aims to develop competitive, dynamic economies that are focused on exportation, developed through public-private collaboration, interconnected and open to the rest of Europe.

ALTERNATIVE TO ECONOMIC REVIVAL IN ALAVA

The Subillabide 2 project will link the industrial estates in east Jundiz and Subillabide 1, which will provide local companies with around half a million square metres of industrial land in a prestigious strategic location. The direct road links via an interior road network for transport between the different estates will relieve traffic pressure on the N1 and widen the industrial market, attracting activity from sectors related to air transport.

Furthermore, the project will be located less than 3 km from the new VIAP officially presented last week by Bernabé Unda, the Minister for Industry, Innovation, Trade and Tourism. However, the synergy between these two projects is not just one of functionality or complementarity: there are also clear benefits in terms of environmental sustainability. The cuts and fills involved in the two developments will be balanced, meaning no external resources will need to be provided and money will be saved as a consequence.

Subillabide 2 is also close to the site chosen for the development of an intermodal freight station, which is to be built near Vitoria. The station will be one of the six main hubs created by the Spanish Government's Ministry for Development as part of its National Plan for Freight Transport by Rail, which will constitute another source of synergies, attracting companies that will benefit from the site's proximity to the station or are that are active in the rail industry.

The framework agreement signed commits Iruña de Oca Town Council to facilitating the land-zoning procedures and acquisition of the construction licences, in addition to facilitating SPRILUR's access to owning the land. The council will also carry out the planning modifications necessary to speed up the process of setting the project in motion.

It is estimated that this strategic project, which will provide links to the logistics hub in Álava, will start in 2013 and finish in 2016.