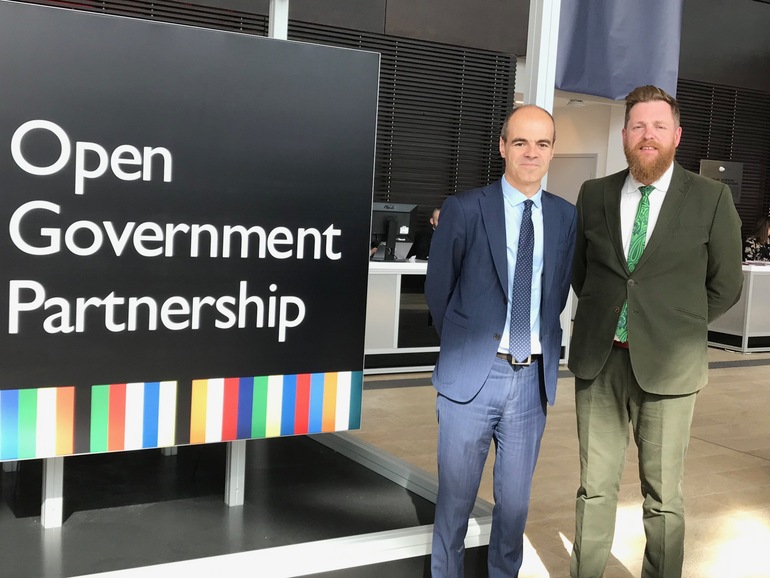 The Open Government Director, Luis Petrikorena, and the Director of Citizen Services & Innovation and Improvement of the Administration, Javier Bikandi, have taken part in the “Open Government Partnership (OGP) Global Summit 2019” being held in Ottawa (Canada) this week. The Open Government global summit ends today, Friday 31 May.

The OGP global summit has brought together 79 countries and 20 local governments belonging to the Open Government Partnership, along with other local and regional governments, civil society groups, academia and beyond. It is a forum for sharing good experiences and learning (networking) between the OGP members. The goal is to share knowledge and together create solutions for more open and transparent governments around the globe.

Luis Petrikorena and Javier Bikandi will take part in different meetings and workshops organised in Ottawa to discuss themes related to digital government, open data, transparency and more inclusive & open governments, among others.

The Open Government Partnership is a multilateral initiative that seeks to ensure specific commitments of governments to foster open government, empower citizens further, fight corruption and use new technologies to strengthen governance.

The OGP was formally launched on 20 September 2011 during a UN General Assembly meeting, when the heads of state of the 8 founding members (Brazil, Indonesia, Mexico, Norway, Philippines, South Africa, United Kingdom and the USA), along with a similar number of civil society leaders, endorsed the Open Government Declaration and announced their country action plans.  Since it was launched, the OGP has led to 2500 commitments from 75 participating countries, which covers a third of the world’s population. The OGP is an international benchmark organisation whose purpose is to assess and develop mechanisms to make governments “more transparent, responsible and accountable to the citizens”.

In 2018, the OGP selected the Basque Country as one of the 20 regions worldwide to take part in its programme. The candidacy was jointly submitted by the Basque Government, the Araba, Bizkaia y Gipuzkoa Provincial Councils and Vitoria-Gasteiz, Donostia-San Sebastián and Bilbao City Councils, and supported by Innobasque - Basque Innovation Agency; Matia Fundazioa and the Basque Youth Council – EGK.

The implementation of an action plan is one of the commitments that all OGP participants assume. The Basque Country’s action plan has 5 initiatives that are already being implemented and which will end in 2020.  The 5 initiatives are:

1.- Accountability through the mandate plans