Change the Change, the International Conference on Climate Change, gets a high rating from the participants 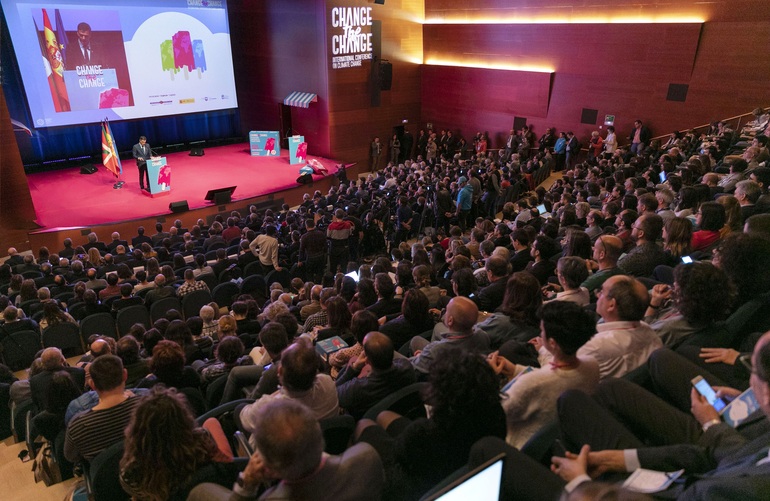 Change the Change, the International Conference on Climate Change, held in Donostia/San Sebastián from 6 to 8 March, gathered together 57 of the leading international climate change experts, along with 775 delegates (capacity fully taken up from 1 March). There was also a further 254 people that followed the streamed event. The feedback from all of them was very positive, with the event awarded an average rating of 8.1.

Over three days, Change the Change generated an economic impact of €3.4 million: around €600,000 in the city in terms of accommodation, transport, trade and hospitality, and €2,813,00 in media impact. The Conference was covered by 137 professionals from 52 accredited media, including correspondents representing foreign media. There was media impact worldwide, including in France, Portugal, the United Kingdom, Belgium, Italy, Germany, Argentina, Peru and Chile, ensuring the problem of climate change was on the media agenda.

The highest rated aspects were the importance of the speakers, the organisational aspects and the technical resources offered. Three out of every four of the delegates said that they would attend the II Change the Change, if held.

Another notable aspect has been the interinstitutional coordination that made the Conference possible, with the involvement of the four administrative levels: The Spanish Ministry for the Ecological Transition, and the Basque Government’s Ministry of the Environment, and the Departments of the Environment of Gipuzkoa Provincial Council and Donostia/San Sebastián City Council.

The Change the Change International Conference on Climate Change was the main event of the first Basque Country’s Climate Change Week, known as ASTEKLIMA, during which nearly a hundred activities were organised for the general public in 49 Basque municipalities.

Both the Change the Change Conference and the first ASTEKLIMA sought to raise awareness of and to urging people talking about climate change, along with encouraging citizens to embrace a personal commitment with specific actions in their everyday habits, on the basis that any action, however small, makes a difference.