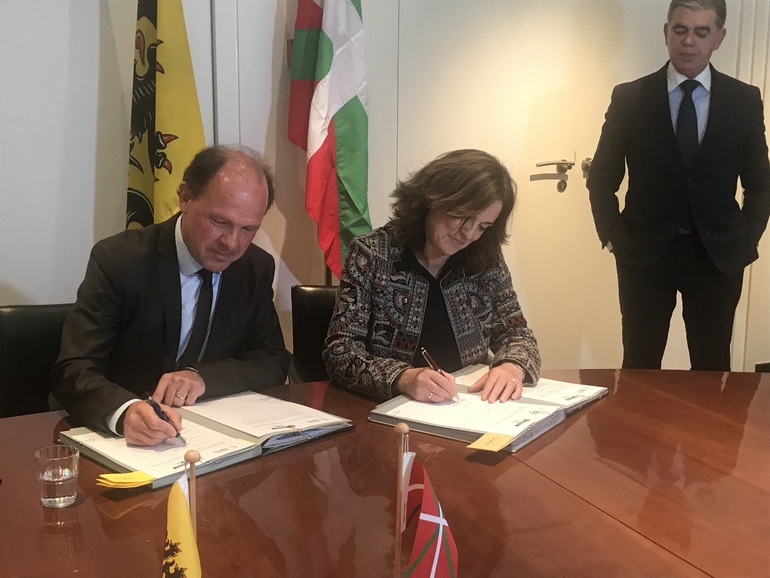 Phillippe Muyters, Minister of Employment, Economy, Innovation and Sports of the Government of Flanders and the Minister of Employment and Social Policies of the Basque Government, Mrs. Beatriz Artolazabal, have signed this afternoon in Brussels a protocol or addendum to the Declaration of Intentions maintained by the Basque Government and the Government of Flanders since 2015. They have analyzed the development of the different initiatives included in it, among which the exchange of experiences in employment policies and training for employment and the adaptation of employment policies to the challenges arising from automation and the development of artificial intelligence.

The basque Deputy Minister of Employment and Youth, Marcos Muro, the Basque Employment Service (Lanbide) director, Borja Belandia, and Marta Marin, delegate of the Basque Government in Brussels to the European institutions, participated in the meeting. Muyters and Artolazabal analyzed collaboration in anticipating the demands of the labor market and in stimulating innovation in employment policies and the implementation of the model based on competencies in public employment services.

Within the framework of "Vision 2050-Long Term Strategy for Flanders", the Flemish Government is prioritizing, in its employment policies, the development of the professional skills necessary to respond to disruptive transformations in the social, business and technological fields. Philippe Muyters was Minister of Finance, Budget, Territorial Planning and Employment Policies and General Director of VOKA, the main business organization of Flanders, as well as General Secretary of SERV.

The Social and Economic Council of Flanders (SERV) is the main consultative body of the Government of Flanders in the field of social and economic policies that Mrs. Artolazabal has also known today. SERV advises the Government of Flanders in the design, execution and evaluation of employment policies, social inclusion, equal opportunities and promotion of the social economy. The governing body of SERV is composed of 10 representatives of business organizations and 10 representatives of Flemish Trade Unions.

Caroline Copers holds the rotating presidency of SERV and has detailed to the basque delegation the functioning of the entity as well as explaining the social consensus on inclusion policies; the impact of automation and robotization on employment; the improvement of the employability of people with greater difficulties of labor insertion; employment policies aimed at promoting the diversity and labor integration of people with disabilities and the social and labor integration of immigrants and refugees.

VDAB is the public agency of the Government of Flanders dedicated to orientation and labor intermediation, as well as training for employment and Mr. Fons Leroy is its general director since 2005. He has explained to Beatriz Artolazabal the implementation of the model based on competencies in public employment services; the digitization and automation of public employment services; the forecast of employment trends and anticipation of labor market needs; the programs aimed at improving the labor insertion of young people and various initiatives to reduce the gender gap and improve the employability of women.