The Basque Country and Nuevo León (Mexico) deepen their cooperation in Industry 4.0 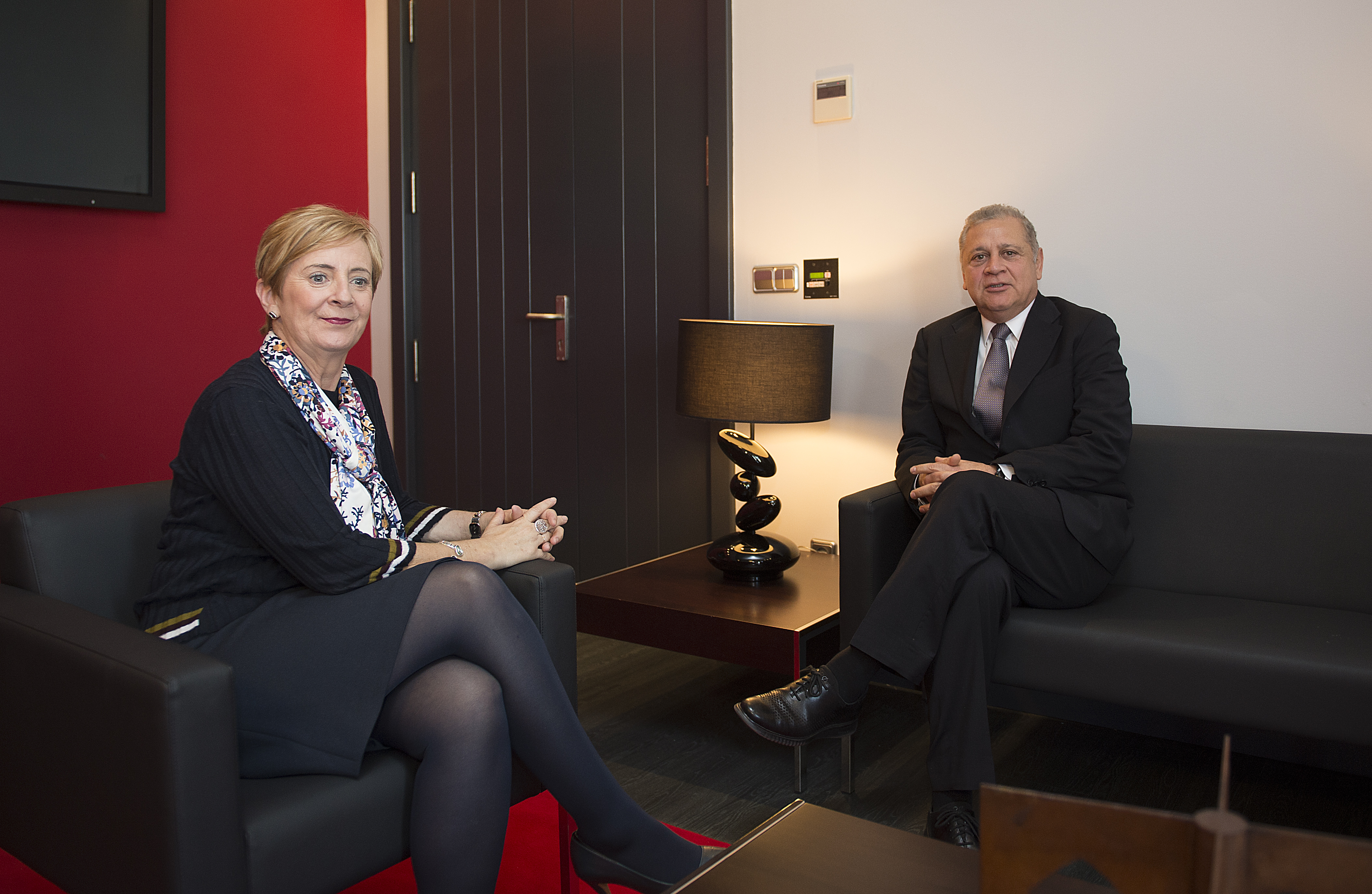 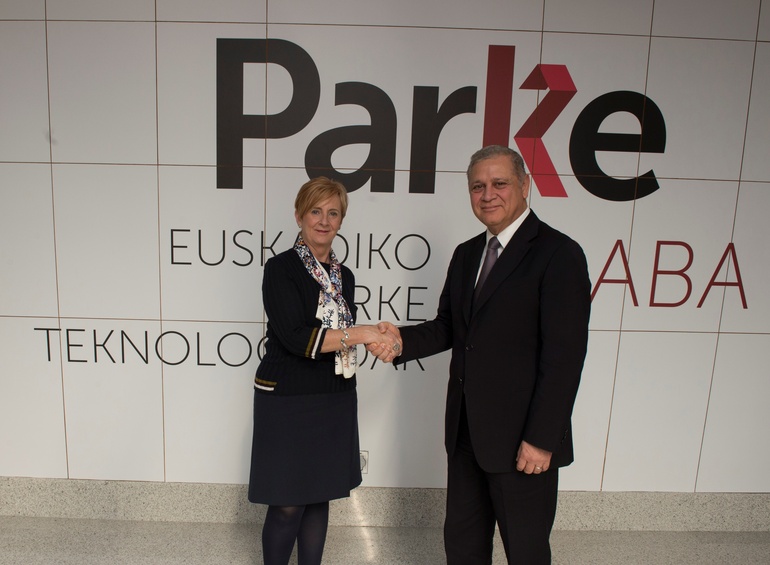 The Basque Government’s Minister for Economic Development and Infrastructures, Arantxa Tapia, met with the Secretary State for the Economy and Labour of the Mexican State of Nuevo León, Roberto Russildi, at the Álava Technology Park today.  The Basque Country has an important economic link with the Mexican State focused on developing Industry 4.0 and technological entrepreneurship programmes, and regarding which the SPRI Group has partnership agreements in force. In recent months, institutional representatives of the Basque Country and Nuevo León have visited each other territories.

Nuevo León is one of the priority States within the Basque Country’s internationalisation strategy in Mexico, due to its technological and economic potential, to the type of industry that it represents and to the interest of Basque companies.  The State of Nuevo León has designed the Nuevo León 4.0 strategy, following the foundations of the Basque Industry 4.0 strategy and is a trail-blazer in Mexico in focusing this effort on driving the so-called Industry 4.0.  Currently, Mexico is home to 211 establishments of around 170 Basque companies and is, along with China, where there is the highest level of Basque investment.

Today’s meeting took place during the Nuevo León Secretary of State’s trip to Europe, specifically to Paris and to the Basque Country. As regards the meeting with Arantxa Tapia, the goal of the Mexican delegation was to learn first-hand the strategy of the Basque Government for the economic development of industry and companies.

In fact, Roberto Russildi had the opportunity beforehand to listen to detailed explanations of the innovation and economic development plans and strategy from the Basque Government’s Deputy Minister for Technology, Innovation and Competitiveness, Estíbaliz Hérnaez, and from the SPRI Group General Manager, Alex Arriola, who this morning welcomed and met with a large delegation accompanying the Secretary of State, including the Deputy Secretary for the Economy and Labour, Américo Gracia, and the Chair of the NL4.0 Board and CEO of Metalsa, Leopoldo Cedillo.

Tapia and Russildi then shared further information on the deployment of strategies underway in the Basque Country regarding Industry 4.0 (Digital Innovation Hub and Plan to Extend Broadband in Industrial Estates), internationalisation, attracting foreign investments and entrepreneurship, financing and industrial promotion.

The Mexican delegation took advantage of its visit to the Álava Technology Park to learn about the Basque technological entrepreneurship and innovation methodology at the Álava BIC (BIC Business Innovation Centre), of which the SPRI Group is the majority shareowner, and Basque industrial cybersecurity strategy at the Basque Cybersecurity Centre, both of which are in Miñano.

This trip to the Basque Country is being rounded off with the visit to the Automotive Intelligence Centre (AIC) in Amorebieta and the meeting, on Friday, with the Association of Information and Electronic Technology Industries of the Basque Country – the GAIA cluster and the visits to the Sisteplant and Vasco facilities.

Last November, the SPRI Group General Manager, Alex Arriola, and the Chair of the Nuevo León 4.0 Board, Leopoldo Cedillo, signed a partnership agreement to help this Mexican State, which is home to Monterrey – one of Mexico’s main cities -, with its plan to foster the digital transformation in order to become the benchmark for the Smart Economy in The Americas by 2025.

This agreement covers sharing expertise and best practices in Industry 4.0, exchange programme for professionals of both countries and also working on entrepreneurship, and taking the Basque Country’s successful Bind 4.0 programme as an example.  Today’s visit is part of the application of that commitment.

An intense institutional relationship between the State of Nuevo León and the Basque Country has been underway for nearly a year. The representatives of the Mexican and Basque Industry 4.0 strategies met at the 2018 Hannover Messe trade fair and that marked the start of exchanges, meetings and the aforementioned partnership agreement with the SPRI Group.

After Hannover, Nuevo León 4.0 attended Basque Industry 4.0 – the benchmark event for that sector – in November last year and where the Agreement was signed. They have not ruled out attending this year’s event to be held on 20 and 21 November.

Back in January, a Nuevo León Delegation visited the Basque Country to get a better understanding of the BIND 4.0 programme, given its interest in launching something similar in its State (MIND 4.0).

The SPRI Group has already been invited to take part as a speaker and member of the content committee at the Inc Corporate Innovation and Growth Forum being organised by the Monterrey Technology Corporate Entrepreneurship and Innovation Centre and which will be held on 9 November this year.

Nuevo León has a population of 5.1 million inhabitants. Nearly 88% of the State’s population is concentrated in the Monterrey metropolitan area. The Nuevo León Gross Domestic Product (GDP) in 2015 accounted for 7.6% of Mexico’s and was ranked 3rd in the country. The Mexican GDP has been growing at around 2% and Nuevo León’s is in the same vein, perhaps slightly over the average. The industry, energy and construction sector accounts for 38% of the GDP (30% in the Basque Country). And when compared to the Basque Country, its economy is just 7.7% larger. The Basque per capita GDP is rather over twice as large. Nuevo León is home to 213 industrial groups, the majority based in Monterrey and its metropolitan area.