Lide Amilibia presents, in the VIII Forum of the Autonomies, the initiative "Share" directed to state and European institutions, that proposes a key of territorial distribution for the welcome and integration of migrants 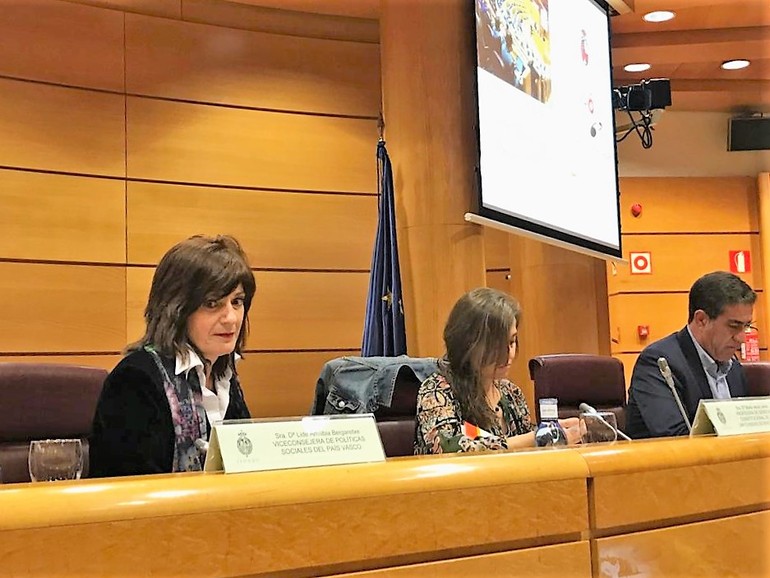 The Vice Minister of Social Policies of the Basque Government, Lide Amilibia, presented the "Share" initiative addressed to state and European institutions at the VIII Forum of Autonomies. It is a cross-cutting proposal that promotes a key to territorial distribution of the effort of reception and integration of migrants.

Likewise, Mrs. Amilibia has proposed that "the European Union implement a European program of support for the socio-labor integration of the JENAs (unaccompanied foreign youth) and that the Government of Spain establishes a coordination framework among all the Autonomous Communities, promoting an equitable distribution of the effort in the attention to the MENAs (unaccompanied foreign minors), all within the proposal that we call Share".

In her speech at the VIII Forum of Autonomies that takes place in the Senate, Mrs. Lide Amilibia has considered that "the State must endow this commitment with economic resources and with guarantees of permanence, harmonizing the normative tools established by the standards in the services of reception and integration of the MENAs and promote agreements with the countries of origin in the MENAs to promote the conditions that prevent minors from leaving their families. "

Regarding the scope of Euskadi, Amilibia has detailed that "the Basque Government committed to a series of initiatives that are already underway, with support to the Provincial Councils, in the response to the MENAs and participate in the working groups constituted at the state level to update the Protocol of action in the urgent reception of MENAs and at the state table to work on a new MENAs service model ".

"We are going to promote co-development projects in the countries of origin of the MENAs that prevent minors from leaving their families. In this sense, the Basque Cooperation Agency works on site in the area of ​​Morocco from which the largest number of MENAs come to Euskadi, to which, in April, we will return with representatives from different departments to create a vocational training center there " has indicated Lide Amilibia.

The basque Deputy Minister of Social Policies explained that "an ambitious project of socio-labor inclusion has been launched, with a duration of 2 years for 225 young people, in which training courses for employment are offered in order to obtain the certificate of professionalism that allows them to integrate into the labor market ".

"The Basque institutions, we work in the ADOS Advisory Committee for collaboration with the Islamic communities of Euskadi and we develop different initiatives among which is the Fostering of MENAs by families of Maghrebi origin", added Amilibia.

According to Mrs. Amilibia, "migratory movements represent a question that requires, above all, a European response but also a state, regional and municipal response. Globalization and injustices and inequalities generate migratory processes that affect us at all levels of competence ".