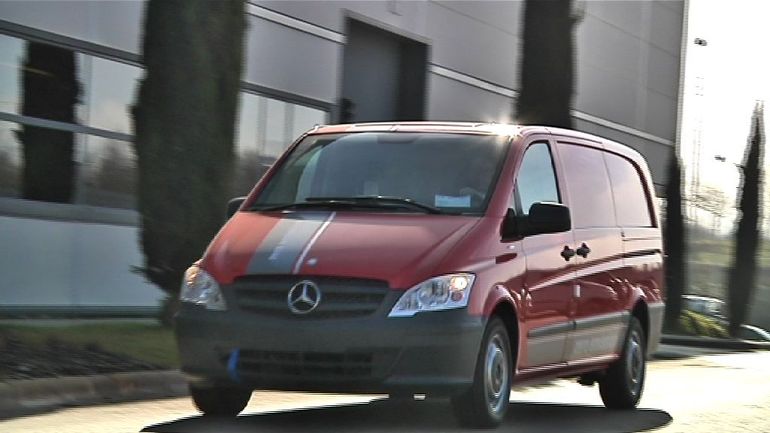 The five vans will help EROSKI reduce its CO2 emissions by 36,066 kg, the equivalent of planting 3,607 trees. Through IBIL, the company that manages its charging infrastructure, EROSKI has installed charge points in two parking spaces in its supermarket car park in Salburua for the free use of its customers. Vitoria, Bilbao and San Sebastian are the first three cities to have taken steps to support this mode of transport. Today, EROSKI and IBIL officially opened charge points for electric vehicles in a supermarket cark park in Salburua (Vitoria-Gasteiz). EROSKI's Director of Logistics Alberto Madariaga was joined by Deputy Minister for Industry Xabier Garmendia and Mayor of Vitoria-Gasteiz Patxi Lazcoz for the inauguration event.

EROSKI has set aside 10 preferential areas in five car parks in its commercial network for the installation of charge points, which will be installed by IBIL S.A., a company that specialises in the management of charging facilities for electric vehicles and in which EVE and Repsol hold shares. The charge points will provide power for the Mercedes E-Cell electric vehicles belonging to EROSKI's distribution fleet and for any customers that use electric vehicles.

EROSKI customers who have electric cars can charge them for free in the two charge point-equipped parking spaces that IBIL has installed in the supermarket in Vitoria, using a special card giving them access to the service.

EROSKI and IBIL are working together to promote the use of electric vehicles in the Basque Country. In doing so, they are demonstrating their commitment to a policy of sustainable mobility and respect for the environment as a way of reducing pollution in cities. Electric vehicles do not produce noise pollution or emissions at their point of use and also boast fewer mechanical failures, improved energy performance, lower maintenance costs and lower overall costs per kilometre than conventional vehicles.

By signing an agreement with EVE and acquiring five electric vans in February, EROSKI will save 13,358 litres of fuel and reduce its CO2 emissions by 36,066 kg (spread across the five vans), the equivalent of planting 3,607 trees. The new vehicles will cover approximately 146,217 km per year, an average of 96.51 km per day for each vehicle.

Initially, the ten charge points will be installed in supermarkets in Indautxu and Bolueta in Bilbao, Barakaldo BEC, Salburua in Vitoria-Gasteiz and ARCCO Amara in San Sebastian. EROSKI plans to continue the process by commissioning IBIL to install more charge points throughout the Basque Country in the car parks owned by EROSKI.

In addition to electric vehicles, in November EROSKI began to deliver its internet shopping and home deliveries using environmentally friendly pedal vehicles. Thanks to this initiative, services to EROSKI's customers have improved and they have given even more of their custom to EROSKI as a result, as orders have increased by 25.5%.

EROSKI and respect for the environment

This agreement regarding the promotion of electric-vehicle use is part of a framework of environmental policies developed by EROSKI, a company that has been firmly committed to respecting the environment since its creation and that constantly seeks new ways of minimising the environmental impact of industrial activity.

Reducing waste in its stores, minimising the polluting emissions of its transport infrastructure, the environment-aware management of its suppliers' production processes, recycling, the move to using environmentally friendly packaging, the specific training given to its staff and the awareness-raising campaigns directed towards its customers (reusing bags, ways to save on electricity in the home, etc.) are just some of EROSKI's activities geared towards respecting the environment.

Moreover, the fleet of lorries used by EROSKI to distribute its goods uses a route optimiser to reduce the environmental impact and carbon emissions of its vehicles. The optimiser is a tool that plans, monitors and optimises every process involved in transportation, including departure times, routes, timetables and distance covered. The use of this innovative technology has enabled EROSKI to introduce elements of eco-management into its logistics processes and as a result the company has managed to reduce the distance travelled by its fleet by an average of almost 5%, save over 5 million litres of fuel and prevent the emission of 14,400 tonnes of CO2 per year. The fleet also uses biofuels, which are less harmful to the environment than fossil fuels.

In addition, EROSKI was recently recognised by the European Union as an official partner in the Sustainable Energy Europe campaign, an EU initiative started in 2005 and which represents the biggest effort to date of the Member States to promote sustainable-energy policies. The campaign complements EU energy legislation and aims to stimulate and increase private investment in sustainable-energy technologies, recognise good practice and promote alliances between global leaders in the field of energy in order to generate new ideas and activities.

The program that received recognition from the EU was the EROSKI 360º Energy Efficiency initiative, which has both an internal and external focus. Internally, the company has implemented an entire series of eco-efficient measures in its stores that not only help save energy, but also make it possible to use energy supplied from renewable and environmentally sustainable sources.

The implementation of eco-efficient measures in stores has manifested itself in places such as the supermarket in the neighbourhood of Gros, San Sebastian, which reopened in July after the installation of energy-saving systems and facilities enabling the use of energy supplied from sustainable sources. EROSKI invested a total of €1,800,000 in adapting its Gros store, which now consumes 50% less energy than a conventional store and emits 200 fewer tonnes of CO2 per year.

Externally, the program aims to promote sustainable energy consumption among the company's customers and to provide them with advice on how to reduce their energy bills. EROSKI's Save Energy campaign consists of a range of different actions such as the creation of a website where visitors can calculate the monetary savings that can be made in the different areas of energy consumption (i.e. heating, electricity, gas, transport, etc.), find out about the amount of CO2 emitted by an average citizen, and discover recommendations on how to save energy. So far, 150,000 people have accessed the site to monitor their energy use. Another example is EROSKI's Consumer Schools and their message of Switch Off Consumption, Switch On Saving, which have been held in all of the company's hypermarkets and have been attended by hundreds of customers throughout Spain.

The consumer-training program began in February 2009 and was designed to raise consumers' awareness regarding the value of energy, provide them with a tool they could use to measure their own domestic energy use and offer advice on how to improve the energy efficiency of their homes.

EROSKI's commercial network consists of around 2,300 different establishments including EROSKI hypermarkets, EROSKI/center, Caprabo and EROSKI/city supermarkets, EROSKI/viajes travel agencies, petrol stations, Forum Sport sports shops, IF perfume shops, Abac shops specialising in leisure and cultural activities, and 25 other platforms. The company also boasts 482 franchised self-service outlets, while outside Spain it has 39 establishments in France including hypermarkets, supermarkets and petrol stations and 4 IF perfume shops in Andorra.
For the past 42 years, 10% of EROSKI's profits have been channelled into charitable initiatives that benefit society. A significant proportion of these monies being reinvested in society is used by the EROSKI Foundation in initiatives that meet three key needs of the community: informing and training consumers, protecting the environment, and solidarity.

IBIL is a company that specialises in the management of charging facilities for electric vehicles and was created in order to establish a charging infrastructure in the Basque Country, thus aiding the development of sustainable, environmentally friendly vehicles.

IBIL aims to become the Basque Country's leading company in the provision of electric-mobility services and in terms of the number of charge points available to the public, as well as becoming a technological benchmark.